Dubai International Marine Club accomplished 90% of its marine sports season 2019-2020 races before the activity was ceased off last March due to the precautionary measures concerning the Novel Coronavirus (COVID-19) pandemic.

The marine sports season 2019-2020 begins last September until the activity was stopped due to the precautionary measures in compliance with the directives of the national authority for everyone to be responsible. Due to the situation the committee decided that the annual long distance race, the 30th Al Gaffal was also postponed to the next season. Which was the activity left to finish the season.

The club also organized the World Championship for the XCAT – Dubai Grand Prix 2019 and the UAE Int’l Aquabike Race which represent the opening of the calendar for the UIM racing for the year 2020 along with the various events and community initiatives held in the season 2019-2020: 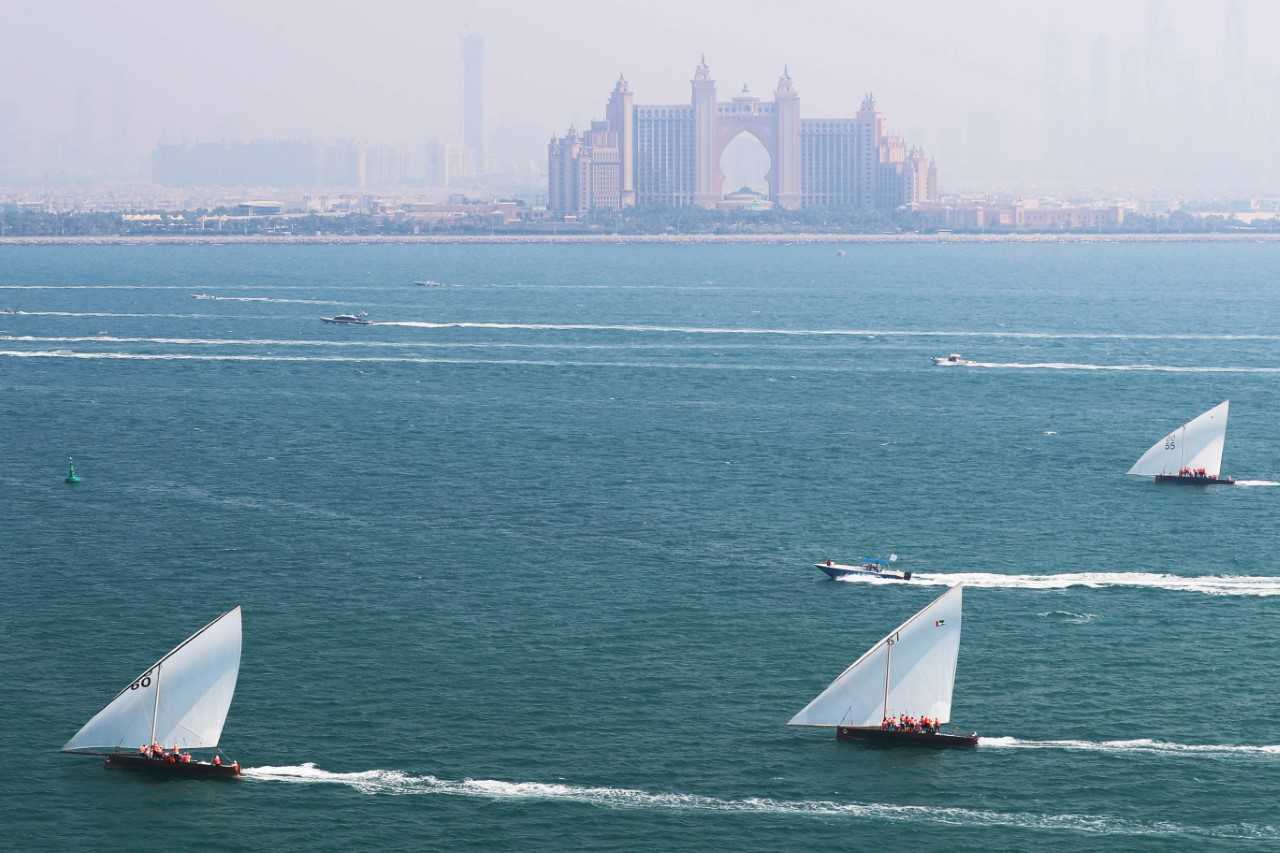 20 November 2019: In his capacity as Ruler of Dubai, Vice President and Prime Minister of the UAE His Highness Sheikh Mohammed bin Rashid Al Maktoum has issued Decree No. (34) of 2019, according to which the Victory Team Establishment will henceforth operate under Dubai International Marine Club. 16 May 2020: His Highness Sheikh Hamdan bin Rashid Al Maktoum, Deputy Ruler of Dubai and Minister of Finance, the sponsor of the annual Al Gaffal Long Distance Race approved that the race will be postponed to next year due to the precautionary measures taken by the state to confront the emerging of the Novel Coronavirus (COVID-19) pandemic.

12-14 December 2019: Under the patronage and attendance of His Highness Sheikh Mansour bin Mohammed bin Rashid Al Maktoum, Chairman of the Dubai Sports Council and DIMC President, the club organized the final round of the 2019 World Championship – XCAT Dubai Grand Prix - at Jumeirah Beach with the participation of 13 boats which catch the attention of the public in Jumeirah beach for 3 days. 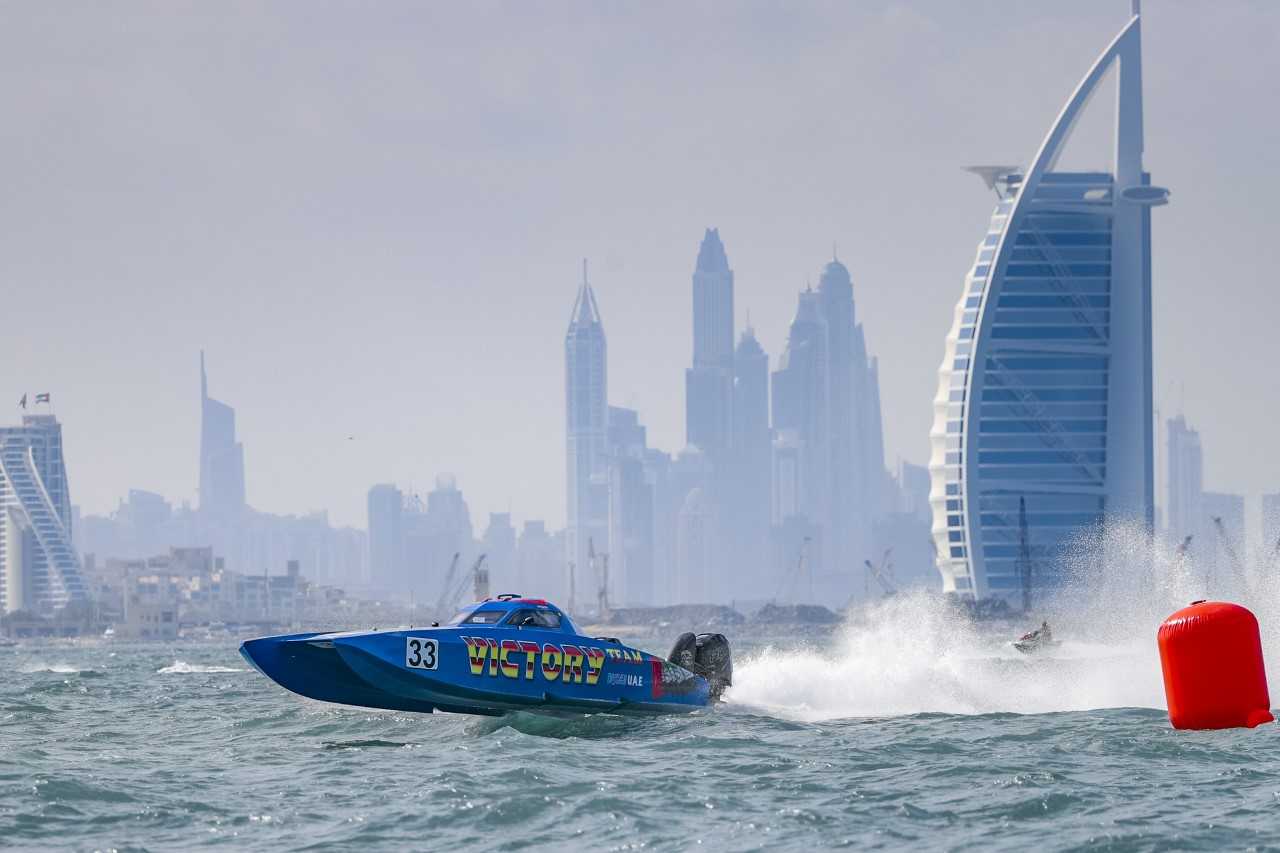 October-November 2019: Sheikh Abdulaziz bin Humaid Al-Nuaimi, Head of the Department of Tourism Development in the Emirate of Ajman, praised the positive role played by Dubai International Marine Club in the success of the activities of Ajman Marine Carnival 2019, held in the beaches of Ajman in Corniche and Al Zoorah Marina wherein the club contributed in organizing the Jetski Drag Race, Flyboard Competition and the Quattro Jetski Marathon.

8 October 2019: Jumeirah Beaches witnessed the Blue Caravan march organized by Dubai International Marine Club in cooperation with Dubai Future Foundation in conjunction with Dubai's hosting the First Global Robotics Challenge 2019 hosted by Dubai during the 24-27 October last year. The initiative is to raise awareness of the importance of cleaning the oceans and employing robotics and artificial intelligence technology to confront the threat facing the world, including marine environment issues.

25 January 2020:  La Mer Beach hosted for the first time the Dubai Int’l Aquabike Race – the first round of the UAE Championship 2020 organized by Dubai International Marine Club as the opening activities for the calendar of the UIM (Union Internationale Motonautique) with the participation of the stars from all over the world competing for the 12 category. 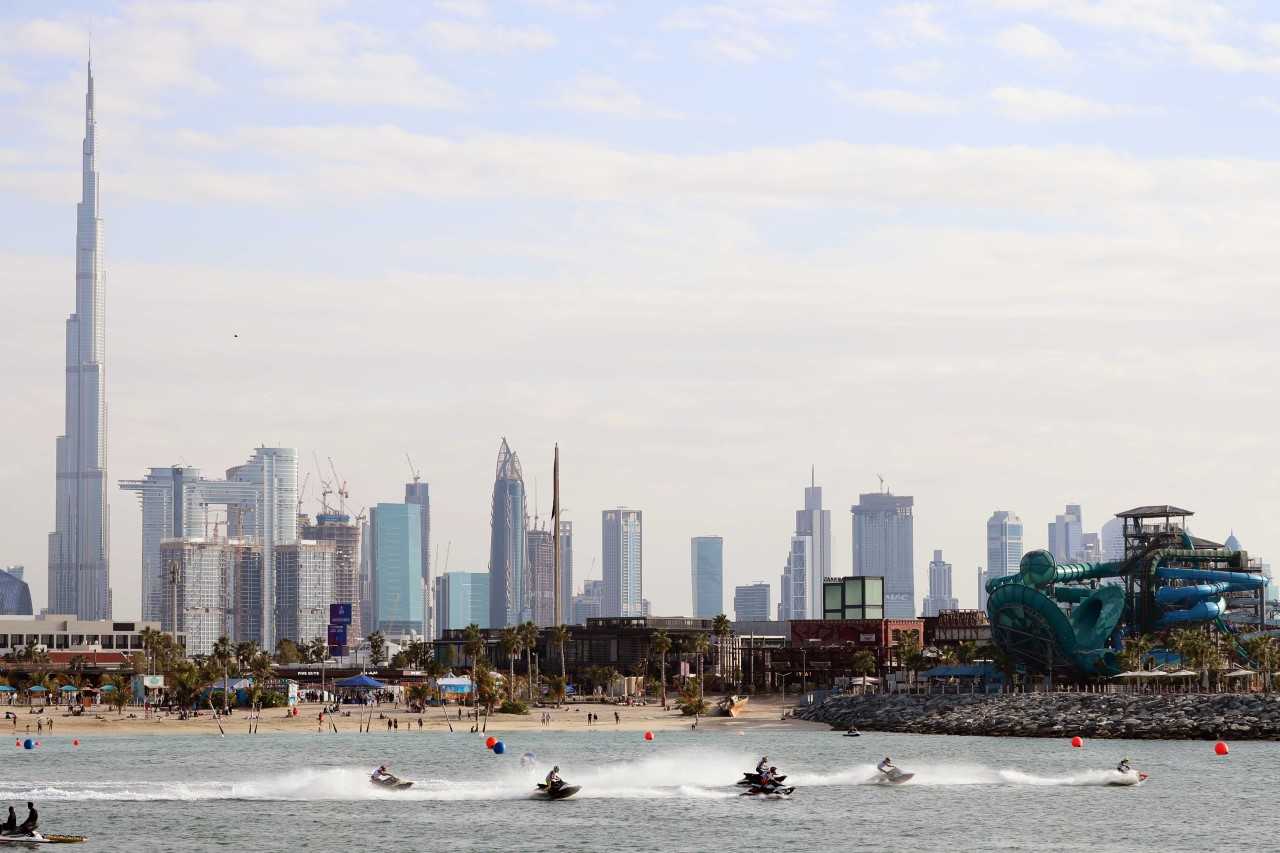 22 November 2019: The club organized in cooperation with the Ports Police Center in Dubai Police the first community event of its kind “Rowing with Heritage Boat for People of Determination” which achieved its success thru the participation of people of determination on board for 5 boats for the 30ft Rowing category. The said event was followed closely by the public held in one of the Dubai tourist spots at the lower part of Dubai Water Canal in Al Jaddaf region in Dubai Creek near the Wildlife Sanctuary. 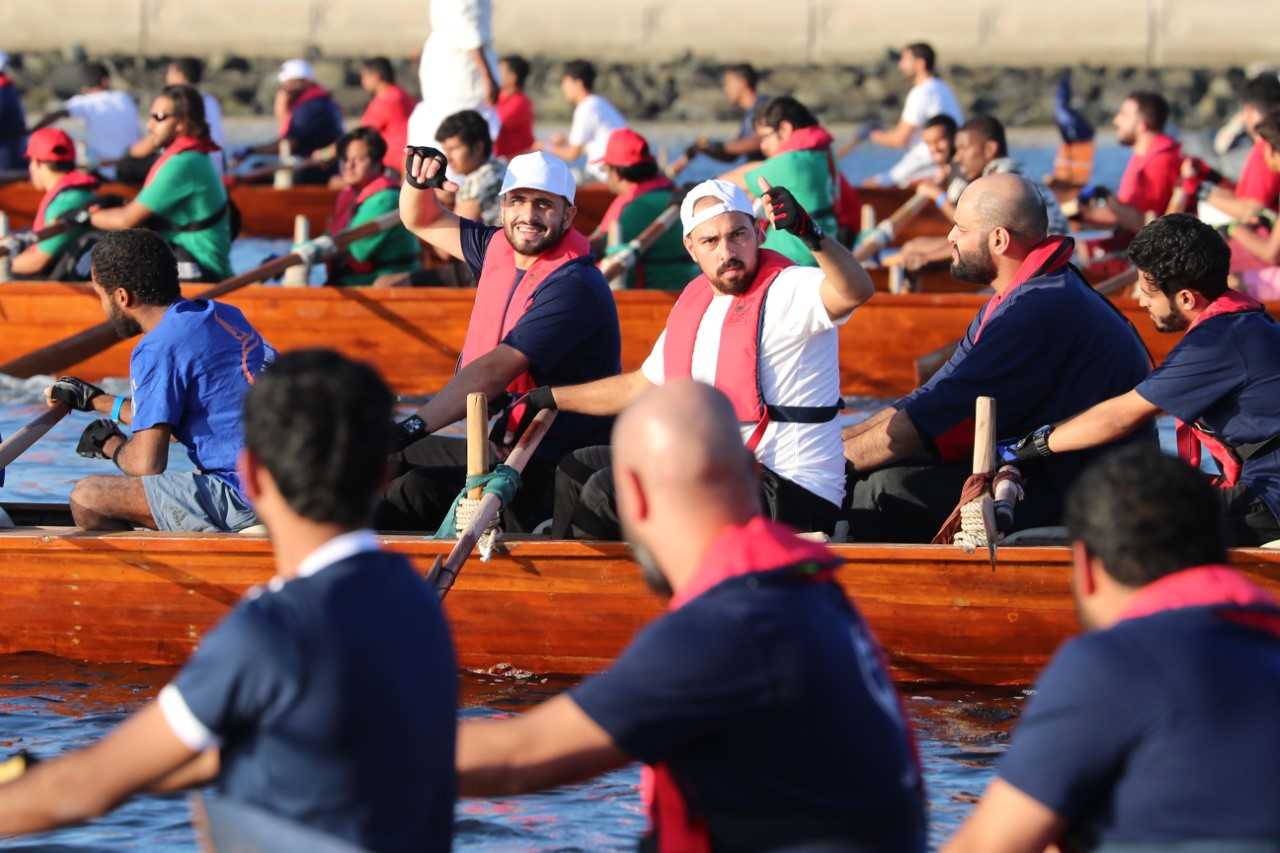 20 January 2020: Dubai International Marine Club has signed a memorandum of understanding and cooperation agreement with the University of Dubai to enhance joint efforts and achieve cooperation in common areas in a way that supports the public interest in the framework of developing and coordinating with the national institutions as well as to strengthened partnership with educational sector.

January-March 2020: In line with the community initiative, the Dubai International Marine Club for the third year in a row organized the Dubai Fishing Competition wherein the profits of the fish gathered are donated to the charitable works through specialized association and institution. The club were able to gather around 1.3 tons of Fish (Kingfish and Cobia) to be sold in the market in cooperation with Dubai Fishermen's Cooperative Society.

22 November 2019:  The Oman boat. No. 44 was crowned as champion of the 23rd Al Maktoum Cup the final heat of the 30ft Rowing Race which was held in the waters of Dubai Water Canal that gathers youth and citizen from the different state in the GCC (Gulf Cooperation Council) with the participation of 25 boats such as from the Kingdom of Bahrain and Sultanate of Oman. 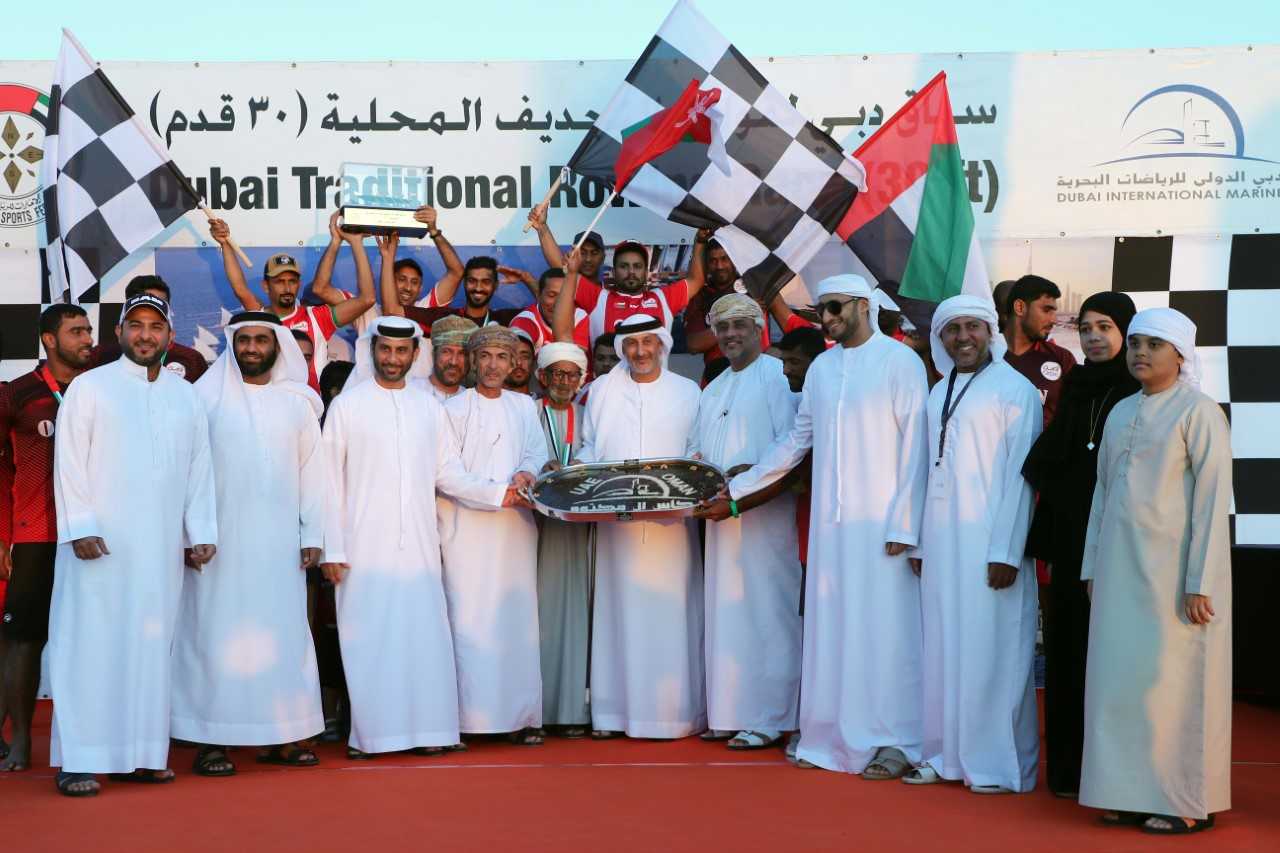 October-November 2019: In response to the official invitation of the International Marine Racing Federation - UIM (Union Internationale Motonautique) to Mohammed Hareb, CEO of Dubai International Marine Club to follow the activities of the second and pre-closing round of the 2019 World Championship - XCAT - which took place in Shanghai, China in the presence of His Excellency Rashid Matar Al-Seri Al-Qamzi, the Consul General of the Emirates in Shanghai.

November-December 2019: The International Marine Racing Federation (UIM) chose Hazeem Al Gemzi, the Director of Sports Department at DIMC, as a supervisor in the team of the world championships for 2019  XCAT Championship - which took place in Shanghai to represent the Emirates in helping with the success of the events.

14 December 2019: Dubai hosted the annual gala dinner for the XCAT  in the presence  the UIM representative and the teams of the XCAT racing wherein the ceremony honored and distributed annual awards for the stars of the season.

December 18, 2019: The Dubai International Marine Club receives a letter of thanks and appreciation from the UIM (Union Internationale Motonautique) which recognize the club effort that made the XCAT - Dubai Grand Prix into its remarkable success as the final round of the World Powerboat Championship 2019 which is organized by the club under the patronage and support of  His Highness Sheikh Mansour bin Mohammed bin Rashid Al Maktoum , President of DIMC.

January - February 2020 : Within the framework of its interest in developing the marine sports and attracting young and junior to participate, the club created two new categories within the race of the Dubai Kitesurf Open in Freestyle and Hydrofoil, in continuation of its plans to support emerging young talents the club held also the Dubai Junior Regatta, Aquabike Junior category and 22ft Dubai Traditional Dhow Sailing Race for (8-16 years old).

31 December 2019 : The Dubai International Marine Club (DIMC) received an appreciation message from Maritimo - Luxury Motor Yachts the owner of the  Australian Team, Maritimo 12 for the huge success witnessed in the XCAT - Dubai Grand Prix wherein the boat won the first place in the second race and the world title for the ninth edition of the World Powerboat Championship led in Dubai last 12-14 December 2019.

March 10, 2020: One of the images taken during the XCAT - Dubai Grand Prix the closing round of the 2019 World Championship won the third place at the UIM Photo Competition in Offshore Categories taken by the Italian photographer Maria Chiara Verga.

December 14, 2019: During the XCAT - Dubai Grand Prix the organizing committee give chance to the audience and social media followers an opportunity to experience the XCAT ride thru the social media contest which gain a great success.