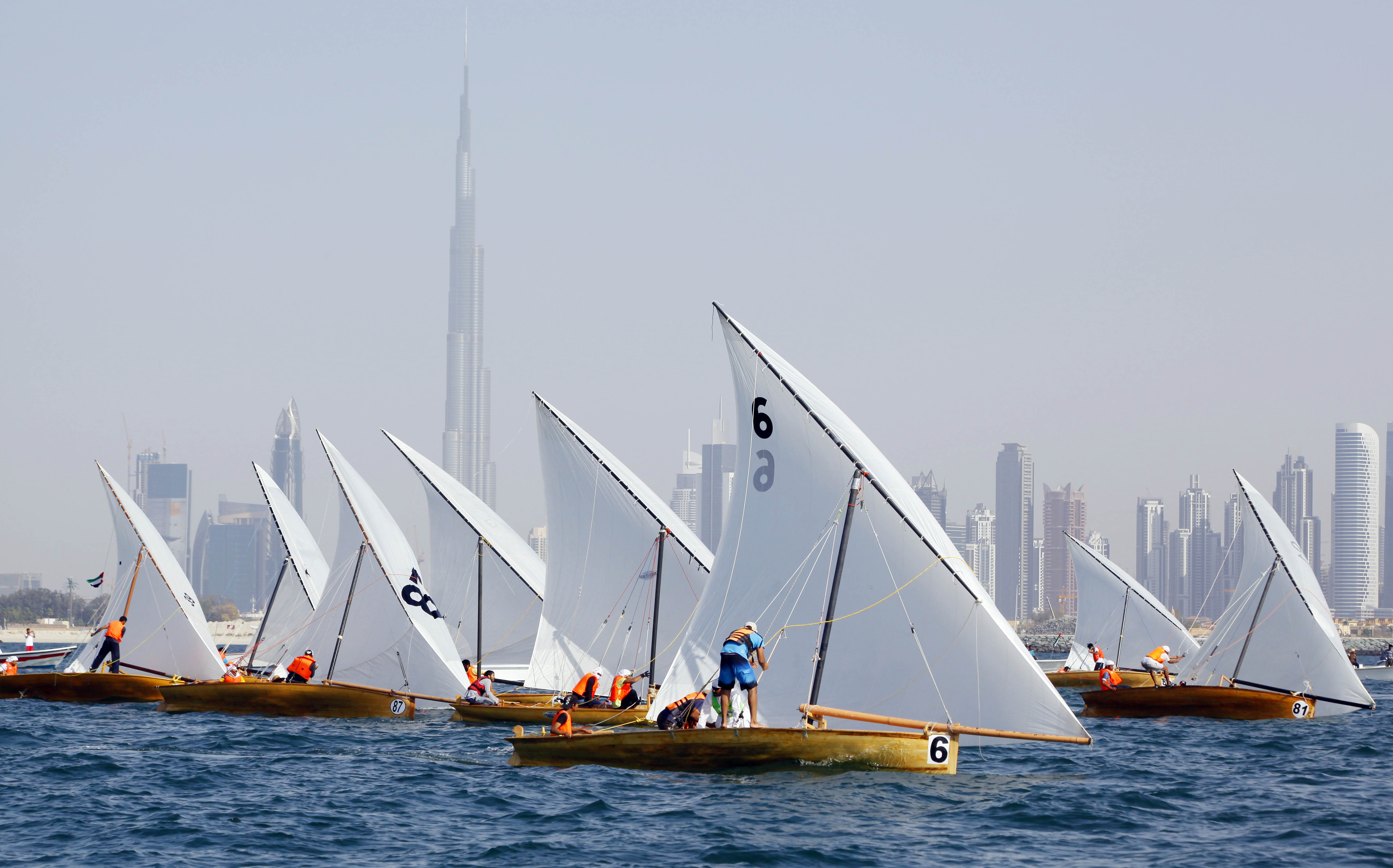 Jumeirah Beach will witness today -Saturday- this afternoon the launching of the new marine sports season 2020-2021 with the first round of the 22ft Dubai Traditional Dhow Sailing Race.

This race will be the first local heritage event since March due to the pandemic Coronavirus (Covid-19). Today, as the new season will start filled with activities and event by Dubai International Marine Club for the season 2020-2021.

During the summer the club continuously organize a set of activities  such as the Dubai Watersports Summer Week with 6 various events , after the end also of the national sterilization program the club held an community sports event , the We Paddle for Dubai for the first time in the Burj Khalif Water Lake and also ythe launching of the Virtual Race, Dubai Virtual Regatta Inshore available on smart application.

Ahmed Saeed bin Meshar, Chairman of the Dubai International Marine Club, welcomes all the participants in the first round race of the 22ft Dubai Traditional Dhow Sailing Race, which is considered the beginning of the activities and races for the marine sports season 2020-2021 with 30 variety of events that will start today and end until next May.

He wishes all the best for the participants , organizing committee, government and national institution that support the club, the owners, the sailors and for the success of representing a unique competition that will reflect the UAE connections to it cultural heritage and the attachment of its children to the past of their parents and grand parents.

The Chairman of the DIMC stated that the club, after the end of the national sterilization program imposed as the emergency response due to the pandemic Corana virus (COVID-19), the club was the first sporting entity to initiate the resumption of the sports activity in cooperation with the Dubai Sports Council after the approval of the health and safety protocol issued by the Supreme Committee for Crisis and Disaster Management In Dubai, where the club organized a successful event : Dubai Watersports Summer Week participated by around 400 athletes in 6 various sporting activities.

He said that today's race embodies a strong return to the club on the map of events inline with that the implementation of all precautionary measures according to the health protocol issued by the Dubai Sports Council, which was recently announced, wherein the organizing committee at the club held a meeting (online) prior to the race to informed all participants of the latest developments, especially to comply with the race instructions and safety measure procedure on and after the race.

The Chairman of the Club Board of Directors concluded in his speech by stressing that today's race, is traditional race which is an important and wonderful stop for the sailor of the new generation , the race will be in youth and junior category together.  It will be a long and busy season for the club with its 32nd year since its establishment at 1988.

The participants of today's race will compete in two categories the Junior and Youth , the 22ft is the sailing academy that enhance their abilities and gain their sailing experiences which aim to prepare the young generations to participate in the other categories of the traditional dhow sailing race.

15:30
The race begins today at exactly 3:30 in the afternoon, as for the participants needed to be at the milling area prior to the race where they will arrive at the P&O
Marina in Jumeirah 4 to adhere to all the precautionary measure of the race including the wearing of face mask except for the actual race , using of hand sanitizer, measuring the temperature, avoiding shake hands gesture and crowd, and observing the social distancing of 2m.

The organizing committee of the event, under the supervision of Hazeem Al Gemzi, Director of Sports Department at DIMC , he held a meeting online for all the participants (sailors and boat owner) to explain further the race instruction , race course, safety procedures and answers all the inquiries by the racers during the meeting.


1999
The first race for the 22ft Dubai Traditional Dhow Sailing Race was held with the participation of 16 boats.