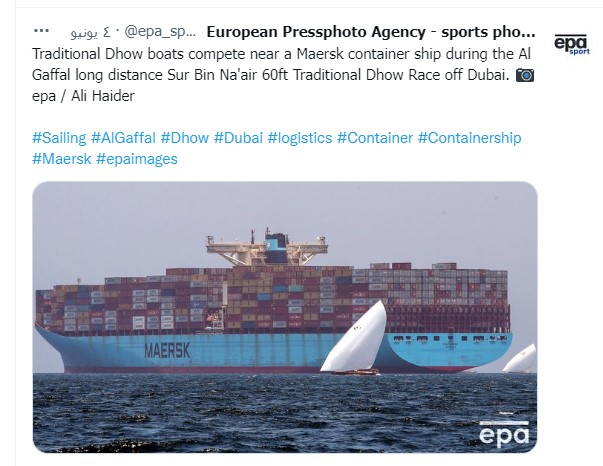 The annual 31st Al Gaffal Dhow Race Sailing Race which is organized by Dubai International Marine Club under the patronage and support of His Highness Sheikh Hamdan bin Mohammed bin Rashid Al Maktoum, Crown Prince of Dubai and Chairman of the Executive Council, was featured in local and international media.

The 31st edition of the Al Gaffal Race was featured in Agency France Press (AFP) which dispatched a professional team that includes: Aziz Al Massasi (Editor), Karim Sahib (Photographer), and Mumen Al-Khatib (Videographer) who prepares the reports, photo and interview for the participants and the Chairman of the Higher Organizing Committee Ahmad Saeed bin Meshar, which is broadcasted and distributed to all their networks around the world. The video was published also on Yahoo and MSN platforms and in various countries such as Britain, Canada, Korea, and Spain.

The international veteran photographer Karim Sahib, who won the international awards in 2006 and the Arab Press Award in 2008 attends the event annually and document his experience thru a stunning photo that captures the attention of people around the world, he published more than 20 images in AFP and Getty Images and was posted in numerous news website locally and international.

The event was also featured in European Press Photo Agency (EPA) through the Photographer Ali Haider Hassan who is also international photographer recognized in the field of Photography thru Italian Ischia Award and various recognition locally and international level.

Ali Haider published a set of stunning photographs during the practice session prior to the race starts on the next day capturing the winning moment of the boat 199 Hashim , the champion of the 31st Al Gaffal Race.

Among the video published all over the world the most prominent report was from the AFP delegation that reached various international channels and platforms such as from AL-Monitor , EFE , and the Dispatch website.

The Russia Today Channel in Middle East also features the said event thru news story thru their delegation that follow the race in Sir Bu Na’air Island. And in the awarding ceremony the presence of the Al Ghad TV crew which broadcasted the race in Cairo and prepares a video summary report thru interview at DIMC officials and the winners.

The event was published in the Arab News and various UAE newspapers that circulated as well the short video on social media for the 31st Al Gaffal Dhow Sailing Race 60ft.