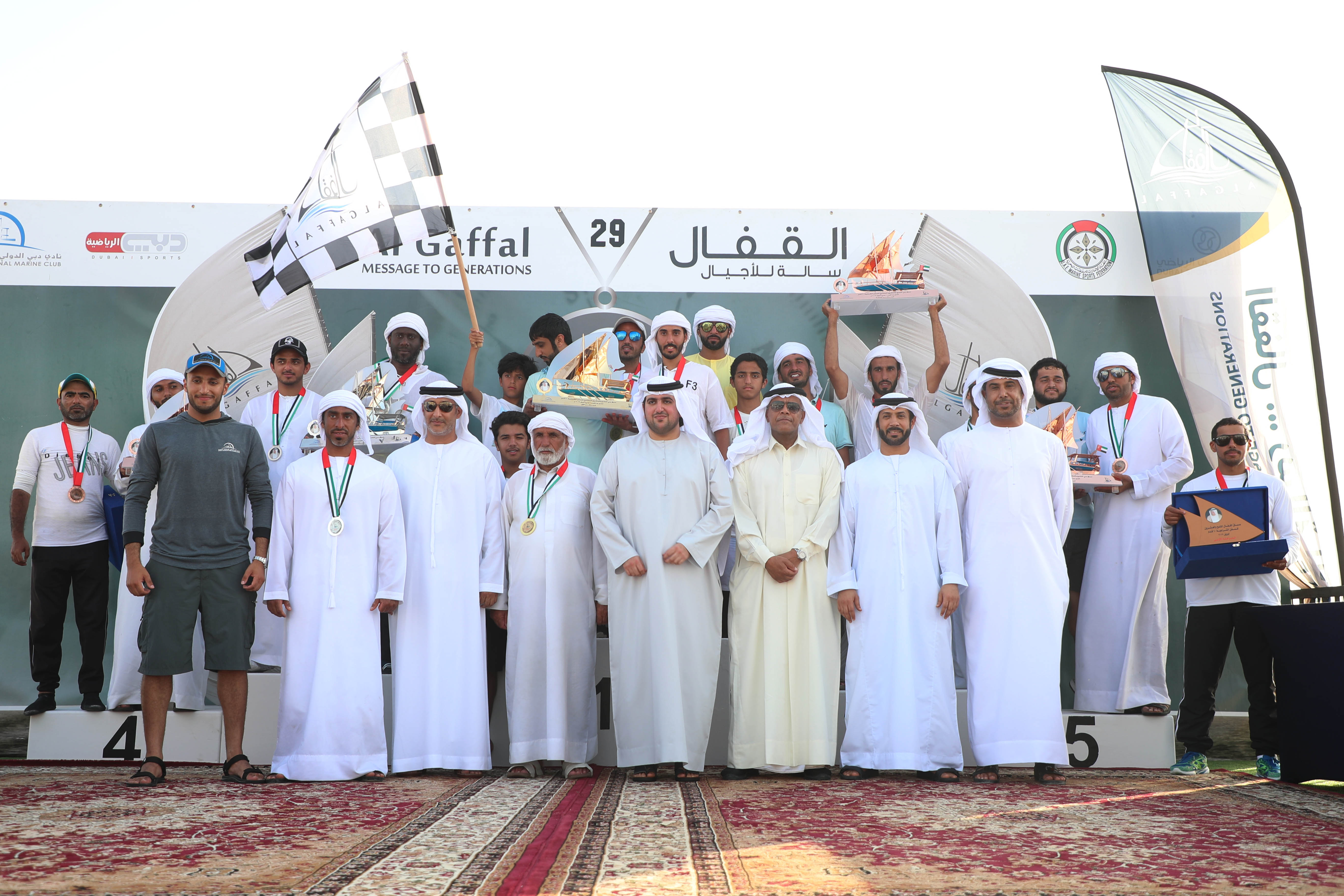 HH Sheikh Saeed bin Hamdan bin Rashid Al Maktoum , Chairman of Hatta Sports and Cultural Club crowned the owners of the top five positions in the race and handed over the trophy for the  first boat who arrived in the Moon Island from the start line in the Sir Bu Na’air Island and winners who winners of the 29th Al Gaffal  that excites the crowd as they await to  celebrate the arrival of the participants safely in the shores of Dubai. It’s one of the most exciting marine races in the recent years and with the presence of higher organizing committee led by Ali Nasser Belhabala Vice Chairman of the Dubai International Marine Club (DIMC) with the Board Members Mohammed Abdullah Hareb , CEO of DIMC and Jamal Zaal  Board Member and with Hezaim Al Gemzi Race Director of the Al Gaffal.

The winning boat, Al Shaqi took a total of 10 hours 9 minutes and 17 seconds (10:09:17) to successfully cross the finishing line located at the iconic Burj Al Arab. The crew’s give a big effort to reach and achieved their target of taking the first spot which is seen consistently all throughout the race. Taking advantage of the changing wind speed, the persistent team celebrated with joy as they came near the finish line.

Al Gaffal Long Distance Race kick off early morning from the Sir Bu Na’air Island towards the Moon Island for the first phase with a distance of 23.6 nautical miles which took them lot of hours to complete due to the dilemma in the wind wherein they mainly rely on.

As the race continues to the  second phase from Moon Island until the finish line at the iconic the Burj Al Arab Hotel place finish line, which extended to 27.7  nautical miles the wind improved allowing them to reach the finish line at lesser time wherein the boat 96, “Al Shaqi” took over the lead against the rival boat no. 120 “Zayurikh” led by Khalifa Muhair Saeed Al Mazrouei which is also owned HH Sheikh Hamdan bin Mohammed bin Rashid Al Maktoum, on the second spot. Taking over the third spot is the boat no. 199 Hasheem owned by Sheikh Zayed Bin Hamdan Bin Zayed Al Nahyan and skippered by Hassan Abdulla Mohammed Juma Al Marzouqi. Included also in the top 5 are the opther two boats owned by HH Sheikh Hamdan bin Mohammed bin Rashid Al Maktoum , the boat no. 103 “Ghazi” and boat no. 87 “Al Wasf”