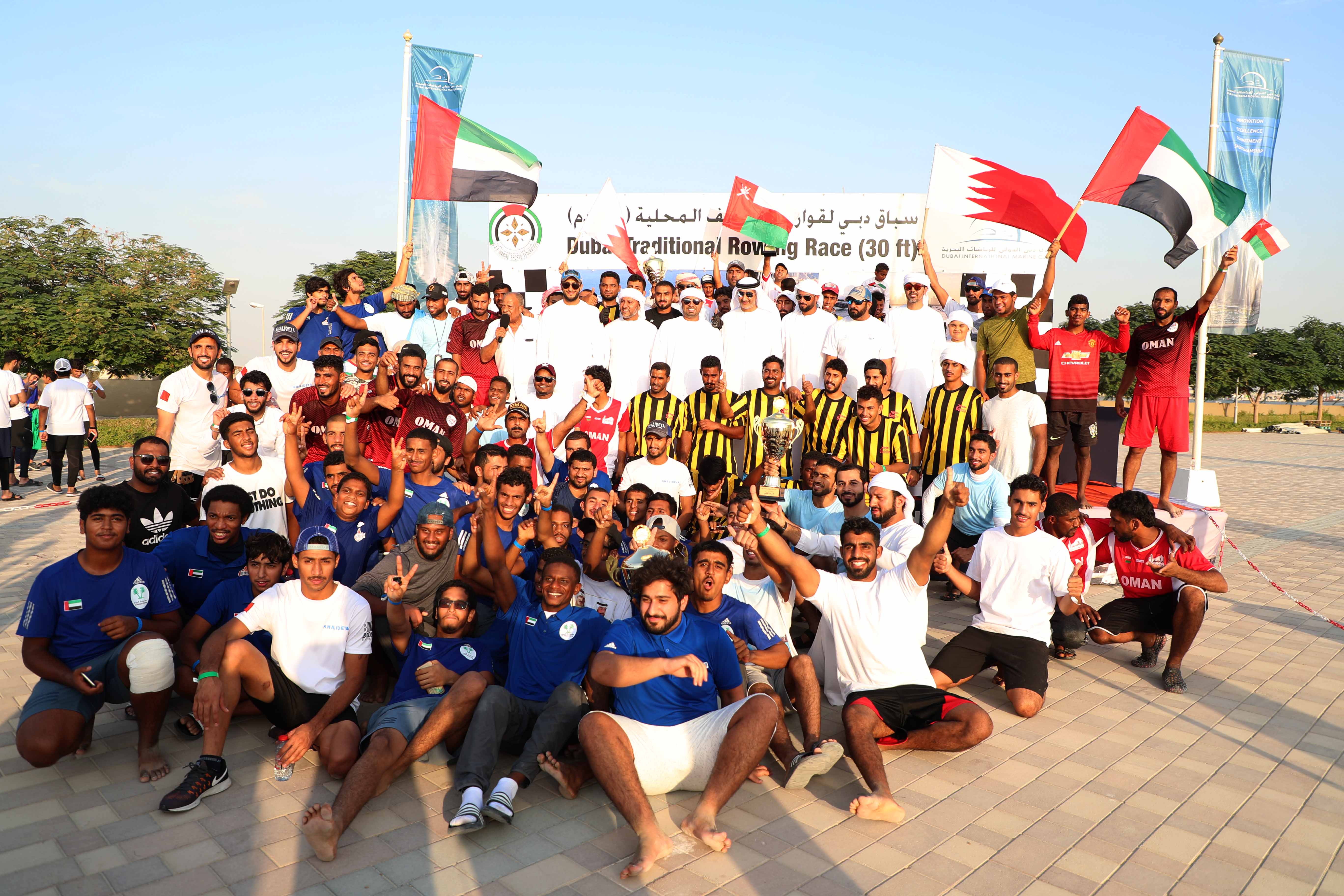 Al Tayar boat no. 60 and Oman boat no. 44 of the blue and yellow flag in the second round of the Dubai Traditional Rowing Race 30ft organized by Dubai International Marine Club last Friday under the marine sports season 2019-2020.

In the big race organized by the club in-conjunction with Dubai Fitness Challenge we saw up to 500 people in more than 40 boats which is divided into two halves classified as blue and yellow flag with a race distance of 2.7 KM in the water of the Dubai Canal near the Al Jaddaf in Dubai Creek near the Wildlife Sanctuary.

The successful boat no. 60 “Al Tayar” was owned by Hazza’a Mohamed Almuhairi led by skipper Ebrahim Sultan Al Marzouqi to grab the lead in the blue flag and continue his brilliance in the current season under the support of its owner who was keen to attend the race to cheer up and give strength to the boat crews.

Going up for the second place in blue flag is the boat no. 39 “Asas” which is owned by Khalifa Rashid bin Shaheen and skippered by Khadim Obaid Khadim while on the third spot is the boat no. 70 “Muzahem” owned by Sheikh Saqer Bin Saoud Bin Saqer Al Qasimi and led by the skipper Ahmed Mohamed Abdulla Ahmedou.

In the second half marked by the yellow flag led by the reigning champion of the Dubai Traditional Rowing Race championship 2018-2019 is the boat no. 44 “Oman” owned by the Ministry of Sports in Sultanate of Oman led by the skipper Humaid Bin Salim Bin Humaid Al Bahri who top the the second half in its distinctive performance.

The Oman 44 lead over the rival boat no. 54 “Al Khalidiya” owned by Sheikh Khalid Bin Hamad Al Khalifa and skippered by Ahmed Bin Naser Bin Hassan who finished the second at the end of the race while on the third place went for the boat no. 12 “ADNOC” owned by Abid Mohamed Hassan Al Hamadi and led by his son Mohammed.

Right after the race is the awarding ceremony for the winners of the Dubai Traditional Rowing Race – 30ft led by the presence of Mohammed Harib , CEO of DIMC and Hezaim Al Gemzi the Director of Sports Department at DIMC with Mohammed Al Shamsi the Director of Admin Corporate Support and Lt. Col. Ali Abdulla Al Naqbi  the Director of the Maritime Rescue Department of Dubai Police where in crowned in the first half (blue): Al Tayar (60), Asas (39) and Muzahem (70 ) and for the other half (yellow) : Oman(44), Al Khalidiya(54) and ADNOC (12)