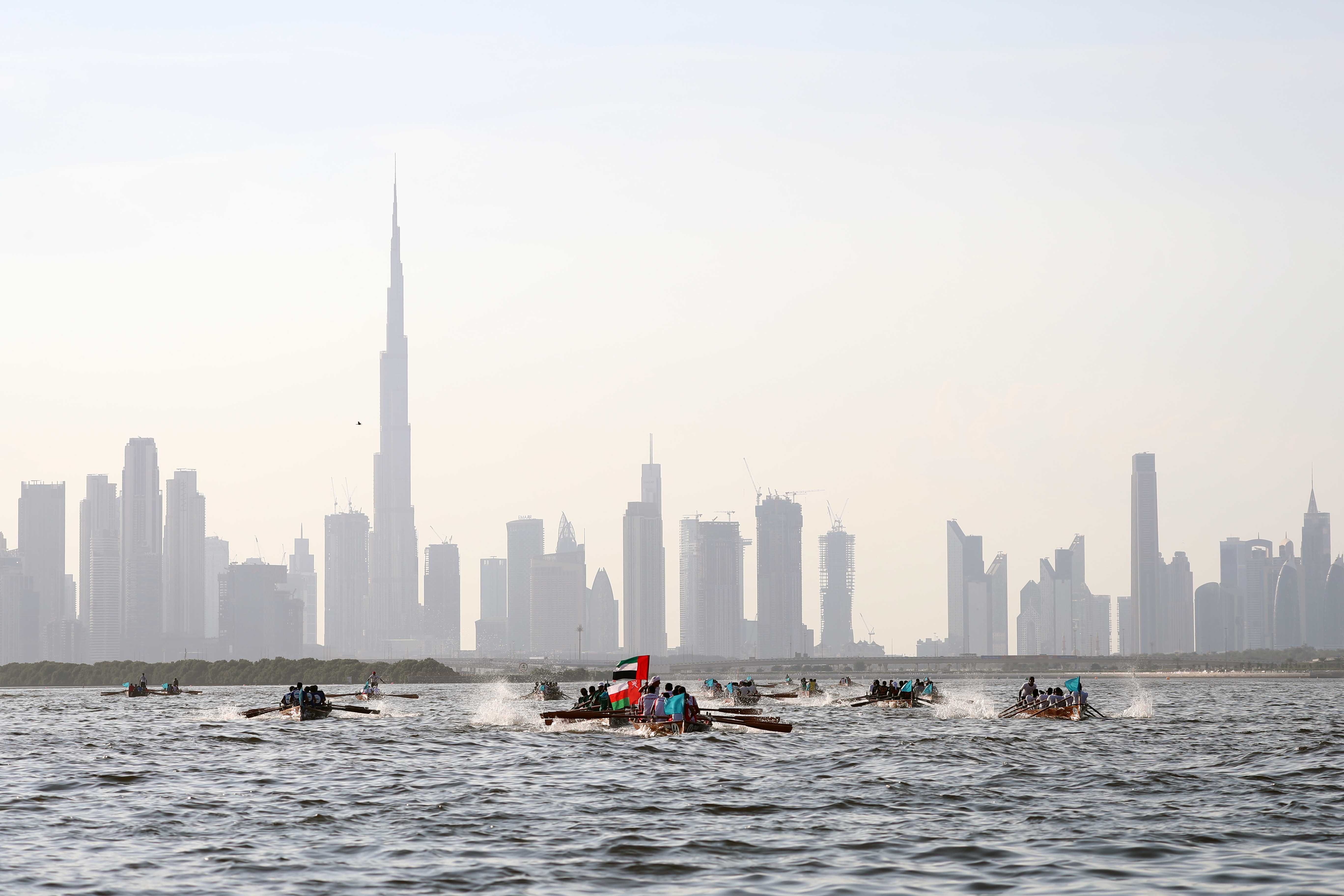 The sibling boat from Kingdom of Bahrain and Sultanate of Oman continues their remarkable win in the Dubai Traditional Rowing Race  - 30ft (Heat 2) organized by Dubai International Marine Club last Friday under the marine sports season 2020-2021.

The Oman 44  owned by Ministry of Culture , Sports & Youth led by Humaid Bin Salim Bin Humaid Al Bahri took the first place in the first half of the rowing race while the boat KHK 54 owned by Sheikh Khalid bin Hamad Al Khalifa and led by Ahmed Nasser Al Busmit won the top spot in the second half of the race.

The big race that took place on the Dubai Water Canal which achieved a great success with the participation of 40 boats with more than 350 people on board, who all competed to grab the first place in the first and second halves represented by blue and orange flag among them are the GCC participants such from Kingdom of Bahrain and Sultanate of Oman in addition to the UAE residence and fan of this sports.

The spirit of excitement and challenge has dominated in the race's atmosphere since the beginning, as the second round is the last stage to qualify their participation in the most expensive race in this category the Al Maktoum Cup on in its twenty-fourth edition, which represents the end of the racing season of this category that will happen on the 25th this month.

First Half of Competition

The first half of the competition was tough between the Oman 44  owned by Ministry of Culture , Sports & Youth led by Humaid Bin Salim Bin Humaid Al Bahri that snatched the first place against the Dubai Police GHQ 3 led by Mohamed Isa Al Mansoori and the third spot goes to Victorious 53 owned by Sheikh Nasser bin Hamad Al Khalifa and led by  Abdulla Khalid Al Haddi.

Second Half of Competition

As the excitement continues in the second half of the race among the 19 boat the KHK 54 was able to take over the lead which owned by Sheikh Khalid bin Hamad Al Khalifa and led by Ahmed Nasser Al Busmit againts the rival boat no. 39 Asas owned by Khalifa Rashid bin Shaheen and led by Badar Abdulhakim Moahmed Thani Bin Thani  . And on the third position Dubai/1 no. 51 owned and led by Ahmed Mohd. Ebrahim Al Mar'ei.

After the end of the race (first and second half) is the warding ceremony for the top three winners led by the presence of Mohammed Hareb , CEO of DIMC with Lt. Col. Ali Al Naqbi, Head of the Marine Rescue Department in Dubai Police and Hazeem Al Gemzi , the race director.

The crew of the Oman boat 44 in the first half of the race in the second round of the Dubai Traditional Rowing Race  - 30ft race a banner in the end (finish line) embodying the brotherhood among the GCC countries and to congratulate the UAE on its 49th National Day.

With the conclusion of the rounds of the Dubai Traditional Rowing Race Championship (30ft), which qualify the elite boats for the most expensive tournament (Al Maktoum Cup), the Organizing Committee announced the date of the twenty-fourth edition to be held on the 25th of this month.