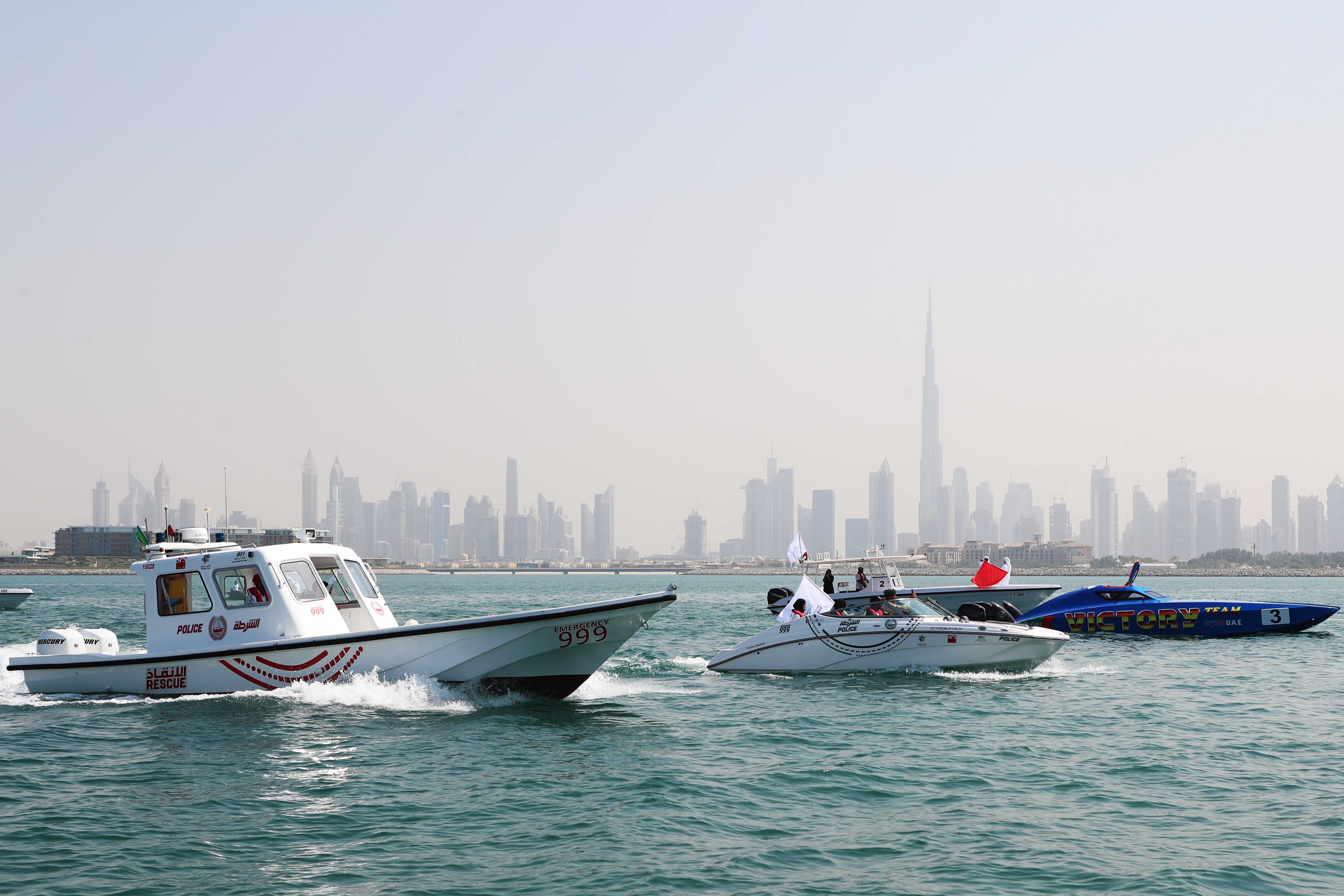 Jumeirah beaches witnessed the launching of the Blue Caravan organized by @dimcuae in cooperation with @dubaifuturefoundation with the participation of Dubai Police , Victory Team and the management of Royal Yacht in conjunction with upcoming First Global Challenge hosted by the Emirate of Dubai on 24-27 October.

The Blue Caravan initiative is a part of the promotional campaign for the first major international event "First Global Challenge" to be held in the UAE and the whole Middle East for the first time with the participation of 190 Countries to raise awareness on the importance of Ocean Cleanliness thru the use of robotics and artificial intelligence to face the threat of global challenges including marine environment issues.

The Blue Caravan, accompanied by the Eco Coast robot embodying the efforts to employ artificial intelligence to clean up the oceans that set sail on Jumeirah Beaches on Wednesday morning from Daria Island, which includes the Bulgari Resort, off the shores of Jumeirah, towards Palm Jumeirah, through the beaches of Nessnas, Umm Suqeim, Kite Beach and Al Sufouh in front of the iconic landmarks in the emirate the Burj Al Arab and Atlantis where it stopped

The caravan convoy's led by the Dubai Police boats wherein they participated led by Lt Col. Ali Abdullah Al Naqbi, Director of the Sea Rescue Department in Dubai Police with the team  and the Dubai Future Foundation team.

The Dubai Traditional Rowing Race - 30ft  the pre-season champion and runner-up to the Dubai International Marine Club race season, a glimpse into the past, which led to raising awareness of the issue of ocean clean-up as the cranks rolled up for participation led by the team's sniffers Mashmoom Mahboob Al Falasi.

The blue march was dominated by the great presence of the Victory Team Foundation which contributed to the success of the event through the team boat XCAT World Champion 2017  which toured in the well-known Dubai beaches such as  Nessnass, Kite Beach and Umm Suqeim Beach led by Ahmed Al-Suwaidi and the Foundation's blue team for the Victory Team Academy team led by Hassan Kassem.

The foiler was featured in the blue caravan with their unique luxury flying boat that does not reach its edges due to flying over water, which was shown at the last edition of the Dubai International Boat Show.

Hezaim Al Gemzi , the Director of Racing Department at Dubai International Marine Club, thanked the Dubai Future Foundation, which allowed the club to participate and supervised the Blue Caravan, which comes as an expression of marine sports and a sense of responsibility towards an important issue related to the marine environment, which is cleaning the oceans using the artificial intelligence.

He also praised the role of the Dubai Police Headquarters represented by the Dubai Police Ports Station for its contribution to the success of the along with the convoy of the rowing boats, Victory Team which provided a great support in terms of technical and administrative side of the #BlueCaravan