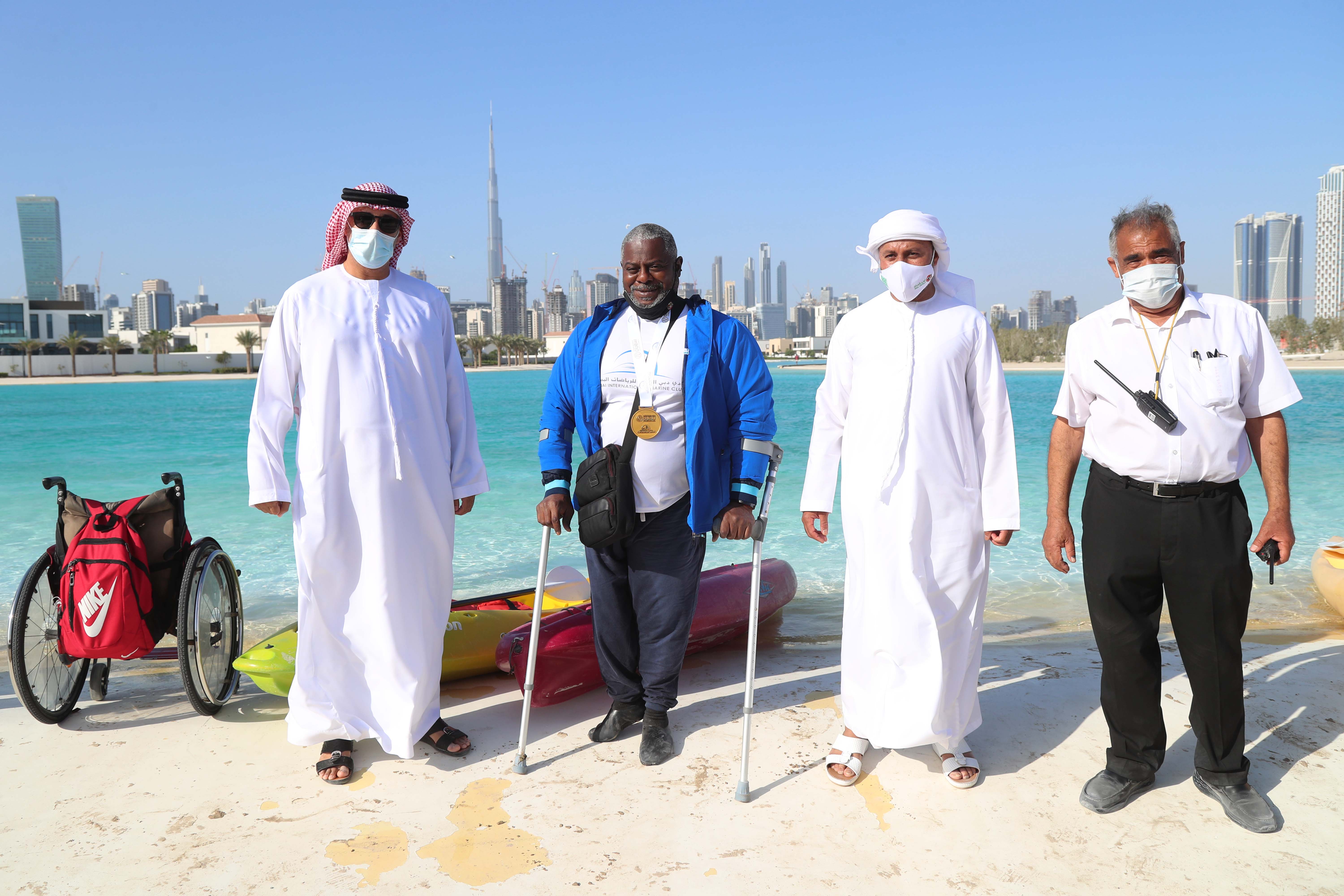 Happiness for the Festival for People of Determination

A unique sports day decorated with happiness and joy in the festival for "We Kayak for People of Determination" and traditional rowing boats in the event organized by Dubai International Marine Club in the current season in order to involve members of the community and increase various sports activities and events.

The festival was held in the Crystal Lake in Mohammed Bin Rashid City District One under the Meydan Group which achieved great success with participation of more than 50 athletes for the Dubai Club for People of Determination and affiliated clubs and institutions.

The joyful festival was attended by Mohammed Hareb , the CEO of DIMC and UNICEF Ambassador in UAE Majid Al-Usaimi , the Chief Executive Officer of Dubai Club For People Of Determination, with Lt. Colonel Ali Abdullah Al Naqbi, Director of the Water Rescue Department at Dubai Police and Hazeem Al Gemzi the Director of Sports Department at DIMC who also supervised the said event.

The great effort of the organizing committee of Dubai International Marine Club in cooperation with the Dubai Club for People of Determination, the General Command of the Dubai Police, the Water Adventure Foundation, which provided kayaks and logistical support, and the Meydan Group, which hosted the festival in the heart of Dubai with a wonderful scenery of the largest man made lake.

The Dubai Police provide safety and security for all the participants and they also provided a Traditional Rowing Boats  -30ft to inspire all the attendees and to give them an opportunity to try it under the supervision of the Dubai Police sailor led by Mohammed Mashmoom Al Falasi.

The festival showed a great enthusiasm, capabilities and great desire of people of determination to take a new experience and discover this sport, especially since kayaks/rowing are one of the well-known Paralympic sports for local and international competitions held for People of determination.

It was attended by the most prominent athletes of people of determination in various sports and games wherein we witnessed the participation of its well-known heroes and stars of the national team for the People of Determination.

At the end it brings smile to everyone’s face as the participants received the commemorative medals honoring the first line of defense the “Front Liner” who had given their loyalty and humanity to the homeland to help fight the pandemic Corona Virus .

Mohammed Hare , CEO of DIMC said the event was held for the second week of the Dubai Watersports Festival which achieved a great success and had given an opportunity for the important segment of the society the People of Determination to take  up new challenges in the field of watersports for the first time.

He added that the club prepares for a series of Dubai Watersports Festival wherein for the first time in club’s calendar. In the first week the club organizes to provide opportunity to learn the basic of Aquabike and Hydrofly to the juniors to encourage them to practice new sports /hobby in an appropriate atmosphere and supervision of the club’s technical and professional staffs.

He also want to thanked all the cooperative partners of the club who contributed a lot to the success of the event, the Meydan Group for hosting it an amazing place in the heart of the Mohammed bin Rashid Al Maktoum City, the Dubai Club for People of Determination and the General Command of Dubai Police represented by the Port Police, the People of Determination Council and the Water Adventures that provided logistic support and all the media that were keen to cover the event.

Majid Al-Usaimi , the Chairman of the Asian Paralympic Committee  and the Chief Executive Officer of Dubai Club For People Of Determination praised the pioneering initiative of the Dubai International Marine Club in organizing a wonderful festival that provided new experience for the People of Determination in taking up challenge in watersports in an ideal atmosphere that makes the difference from other.

A group from Dubai Police represented by the Port Police Department and the council for People of Determination and Water Adventure that provided a great support in terms of logistic and all the media that was present to cover the event.

He stressed that the festival represent the starts of the great cooperation and partnership with the various institutions in the Emirate of Dubai under the patronage and support of His Highness Sheikh Mansoor bin Mohammed bin Rashid Al Maktoum, Chairman of the Dubai Sports Council, with the support of the Dubai Sports Council and the fast response from the DIMC from the idea proposed in a radio program into an actual stunning event.

The Chairman of the Asian Paralympic Committee and Chief Executive Officer of Dubai Club For People Of Determination added that the kayak competition is one of the activities recognized in the championships in the Paralympic Sports Tournament, which provides an opportunity to discover the capabilities of our people in this sport in cooperation with the club (DIMC) to make this event a successful one.