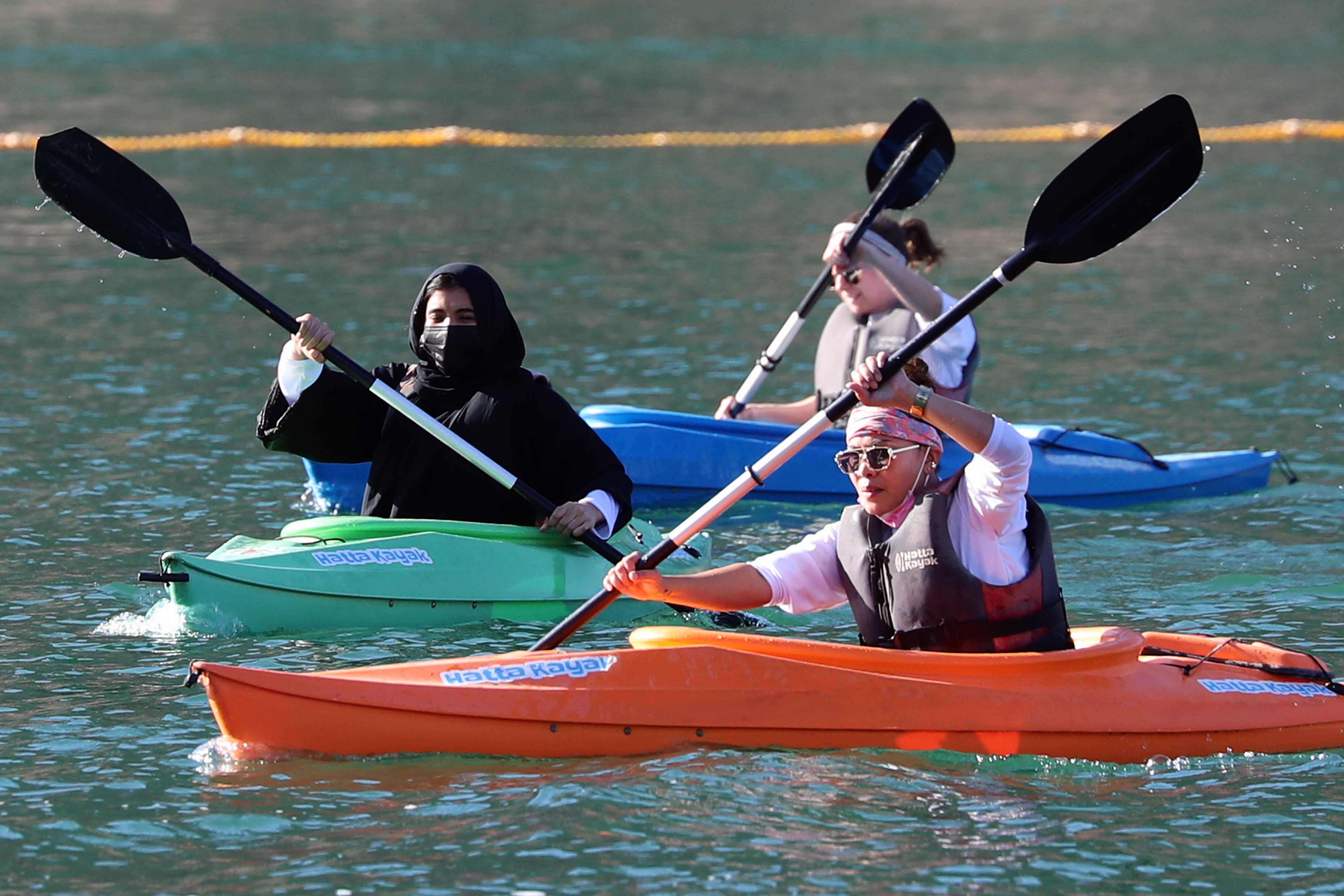 Hatta Witnessed the Rhythm of Paddling and Kayak Race

The big event is organized by the Dubai International Club and was held for the first time in this place in conjunction with the launching of the Dubai Fitness Challenge 2020.  And with the cooperation between the club and the Dubai Sports Council and in coordination with the Dubai Police General Headquarters, Dubai Municipality (Hatta Center), Hatta Adventure Company, Hatta Kayak, Emirates SUP and Surf Committee.

The festival was one of its kind in Hatta and have witnessed a great interest among the officials, with the remarkable attendance and participation of  Sheikh Ahmed bin Hamdan bin Mohammed Al Nahyan, , Chairman of the Emirates Kiteboarding Association (EKA) and the presence of His Excellency Sultan Muhammad bin Sheikh Mejren, President of the Federation Emirates Weightlifting.

The event was followed up and supervised by Mohammed Hareb, the CEO of the Dubai International Marine Club, Lieutenant Colonel Ali Al Naqbi, Head of the Marine Rescue Department at Dubai Police, and Khalfan Majid Al Badwawi, the owner and founder of Hatta Adventure Company, and Ali Al Badwawi from Dubai Municipality, Hatta City Center.

The competition in the Hatta witnessed 6 different races both for men, women and junior, four of them for Stand up Paddling Race and the two is for Kayak Race.

The most prominent participation of Sheikh Ahmed bin Hamdan bin Mohammed Al Nahyan, Chairman of the Emirates Kiteboarding Association (EKA) who took the third place in the Men Short Distance Category for Stand Up Paddling along with Mohammed Obaid Al Mansoori who won the first place and the second place for Sebastian Skoros.

While in the women in the same category the winner is Ismail Soha for the first place and next to her is Rochelle Buyugawan. For the junior category the first place was taken by Mikolaj Franciszek, second place is Fryderyk Szczesny and on the third spot is Abdullah Hassan Al Ali. For the men in long distance the winner is Shane Potaka against the second placer Al Mukhtar Murad and the third place goes to Mohamed Zied Berriri.

For the Kayak Race the winner in Men's Category is Frederico Radici and for the second place Daniel Harrisson and on the third spot is Mohamed Omar Karim. In the women category taking over the first place is Ann Schwandt, second place Tan Weichi and third place Natalie Conarty.