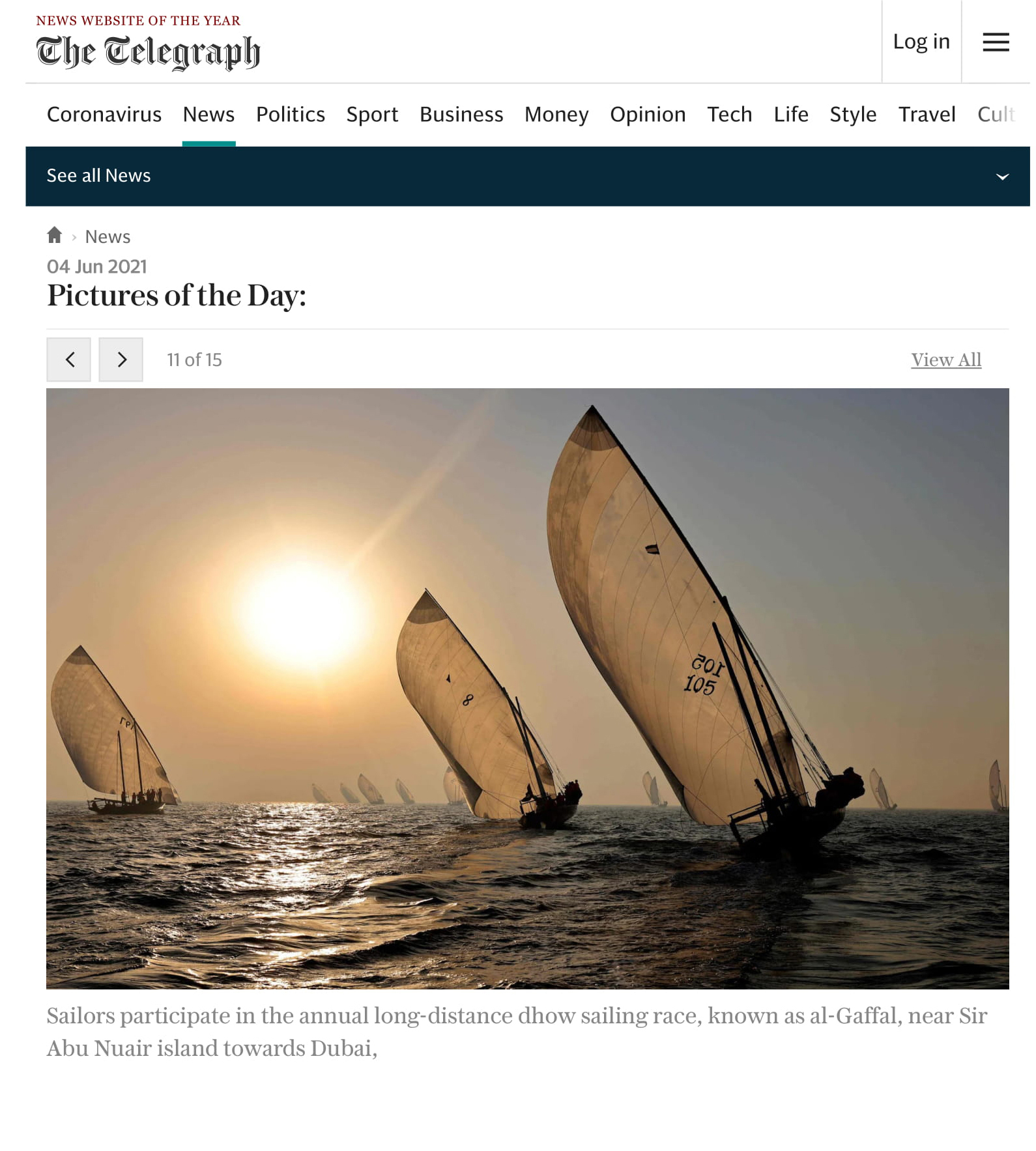 The 30th edition of the Al Gaffal Long Distance Race which was held last Friday, 4th of June, under the directives and support of His Highness Sheikh Hamdan bin Mohammed bin Rashid Al Maktoum, Crown Prince of Dubai and Chairman of the Executive Council in Dubai received an international media coverage thru video clips and photos that shows a great heritage celebration of the Emirati's past culture.

The organization of this great event comes as continuation of the message and path of the heritage sports founded by the late Sheikh Hamdan bin Rashid Al Maktoum, who is behind the insightful idea and the development of the Al Gaffal race since in 1991, which is held annually for more than three decades now.

The race was organized by Dubai International Marine Club  for the 60ft Dhow Sailing Category in which successfully gathered around 106 participation that safely sail last Friday morning from Sir Bu Na'air Island to the depth of the Arabian Gulf crossing thru the Moon  Island then towards the finish line at the new cultural landmark the (Dubai Eye) for a race distance of 53 nautical miles.

The Dhow boats sails early morning last Friday which was accompanied by the lenses and cameras of international press and media agency which is always keen to cover the great race including the AFP (Agence France-Presse), EPA (European Pressphoto Agency) and the Reuters International where they broadcasted videos and photos that were transmitted by the media thru various content all throughout the world which reflected the global value of the race. The picturesque beauty of Dubai was shown in the creative shot alongside with the race as it reach the shore of Dubai in one of its famous landmarks and tourist destination near the island of Palm Jumeirah and Blue Waters in front of (Dubai Eye) - The world's tallest height wheel)

Various international newspapers have published the race on their official website and paper copies including the Telegraph, Strait Times which covers the photo taken by Karim Sahib from AFP. Also in the Spanish sports news paper in AS and El Pais in Madrid. The Italian website Affari Ittaliani , the Argentina newspaper Clarin Fotogalerias and the South African Website Citizen.

Another photos from EPA taken by Ali Haider have been published also world wide in their official EPA instagram account , The Washington Post, the Daily Maverick that chooses two best photo from his picture that week.

The Organizing Committete of the 30th Al Gaffal Race would like to express its appreciation and thanks to all the media organization that was keen to be part of the race and broadcasted the event worldwide that adds up in the exceptional success of the 30th version of the race.

The committee  also would like to praised the follow up and great support provided by the Dubai Media Incorporation as the distinguished media partners in the great event accompanied by the various TV Channels and Radio station such as SAMA Dubai, Dubai Sports TV, Noor Dubai TV.

The event's organizing committee would like to thanked all the media institutions in the country for their great interest in the event and following up on the news, which reflects the race in the hearts of the people of the Emirates.