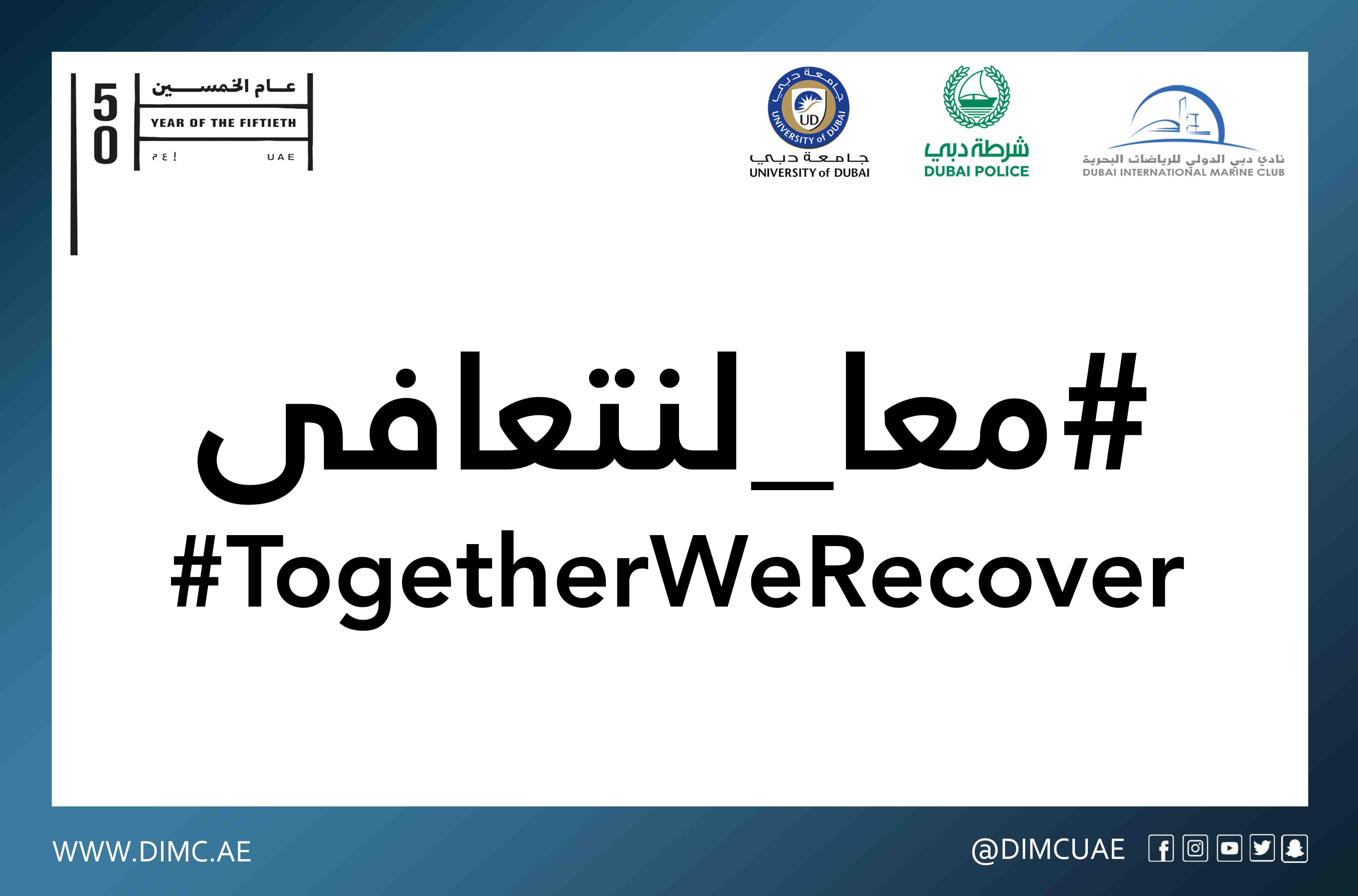 Dubai International Marine Club creates a promotional media campaign in support of the initiative to raise awareness on the importance of taking the (Coronavirus / Covid-19) vaccine, inline with efforts of the General Command of Dubai Police, where we launched the campaign (Together We Recover), inspired by its pioneering role in society and within the existing efforts to ensure the health and safety of the community.

The community initiatives come from the club’s response to the directive of the wise leadership and instruction from the responsible authorities in the emirates (Dubai). In order to urge the public interest and various segment of the society to do prevent the spread of the Covid-19, within the framework of the existing coordination between the government departments and national institution.

The filming took place at the club headquarters in participation of the Dubai Police, University of Dubai, Victory Team and the team from DIMC that prepares and produce the film. 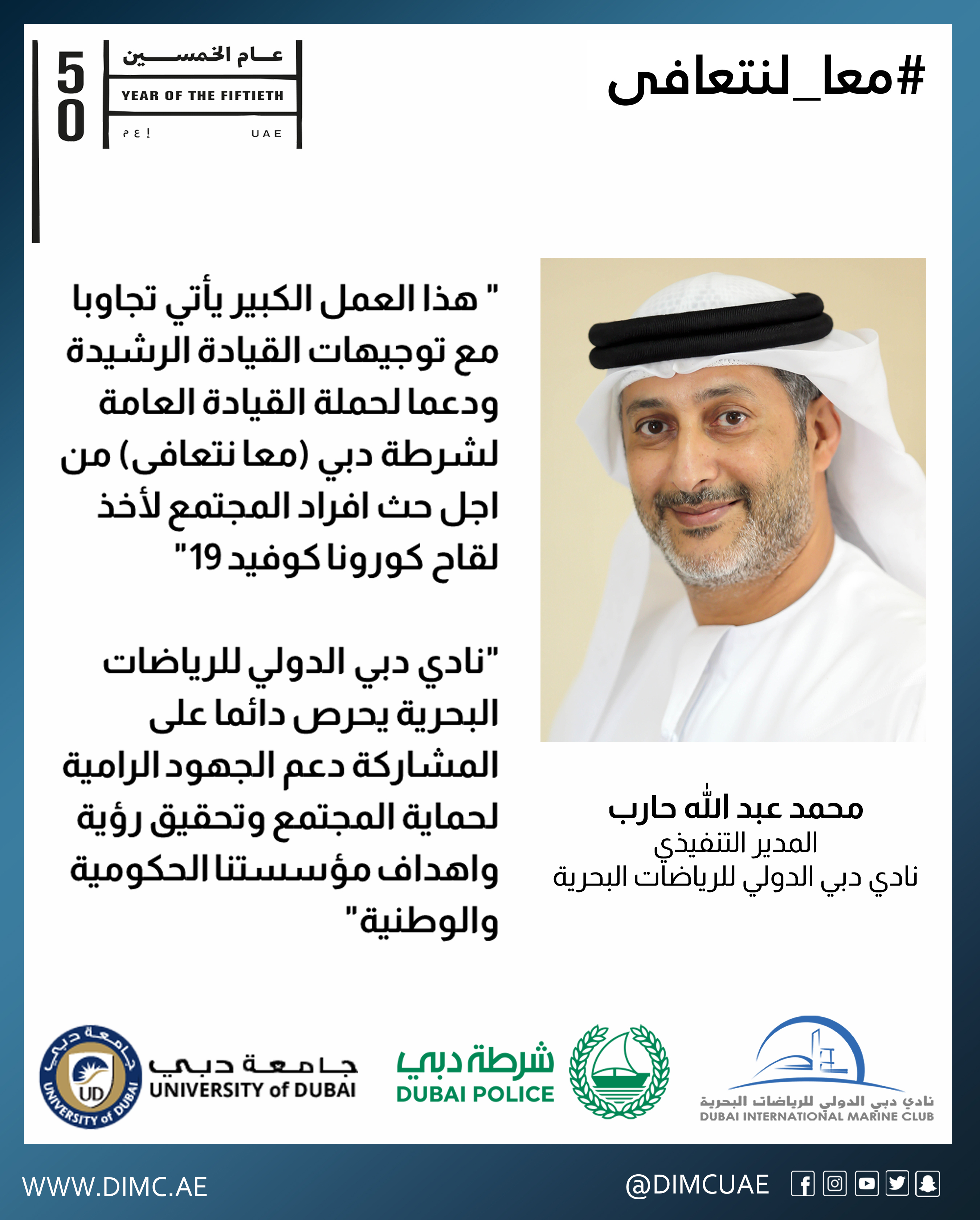 Mohammed Abdullah Hareb, CEO of the Dubai International Marine Club revealed that the participation of the Dubai International Marine Club in the campaign “Together We Recover” comes in response to the directives of the wise leadership and in support of the campaign of the General Command of the Dubai Police (Together We Recover) in order to urge members of the community to take the Coronavirus/Covid 19 vaccine, indicating that the club is keen to participate in supporting and achieving the goals of the governmental and national institution to protect the society.

He thanked His Excellency Lieutenant General Abdullah Khalifa Al Marri, Commander-in-Chief of Dubai Police, Major General Abdullah Ali Al Ghaithi, Director of the General Administration of Bodies, Facilities and Emergency Security in Dubai Police  and Major Ahmed Khalifa Al Mazina for the great efforts , cooperation and the trust given to the club to complete this initiative. In which the club aims to contribute to the relentless national efforts to stop this pandemic and to complete the recovery phase.

The CEO of DIMC would like to thanked also the University of Dubai , which is one of the giant educational institution in the Pearl of Gulf, which participated actively in production of the promotional campaign of the Dubai Police “Together We Recover” through the follow up and support of His Excellency Dr. Eesa Bastaki is President of the University of Dubai

He confirmed that the campaign was done in a short period of time to support the General Command of the Dubai Police to complete the recovery phase with a theme of “Together We Recover”. It was agreed to make a promotional videos that shows the importance of receiving the vaccination.  It was accomplished thanks to the efforts and cooperation of the team as it is launched in various social media platform and circulated. Hoping to achieve its common goal and continues to reach everyone to receive the vaccine. 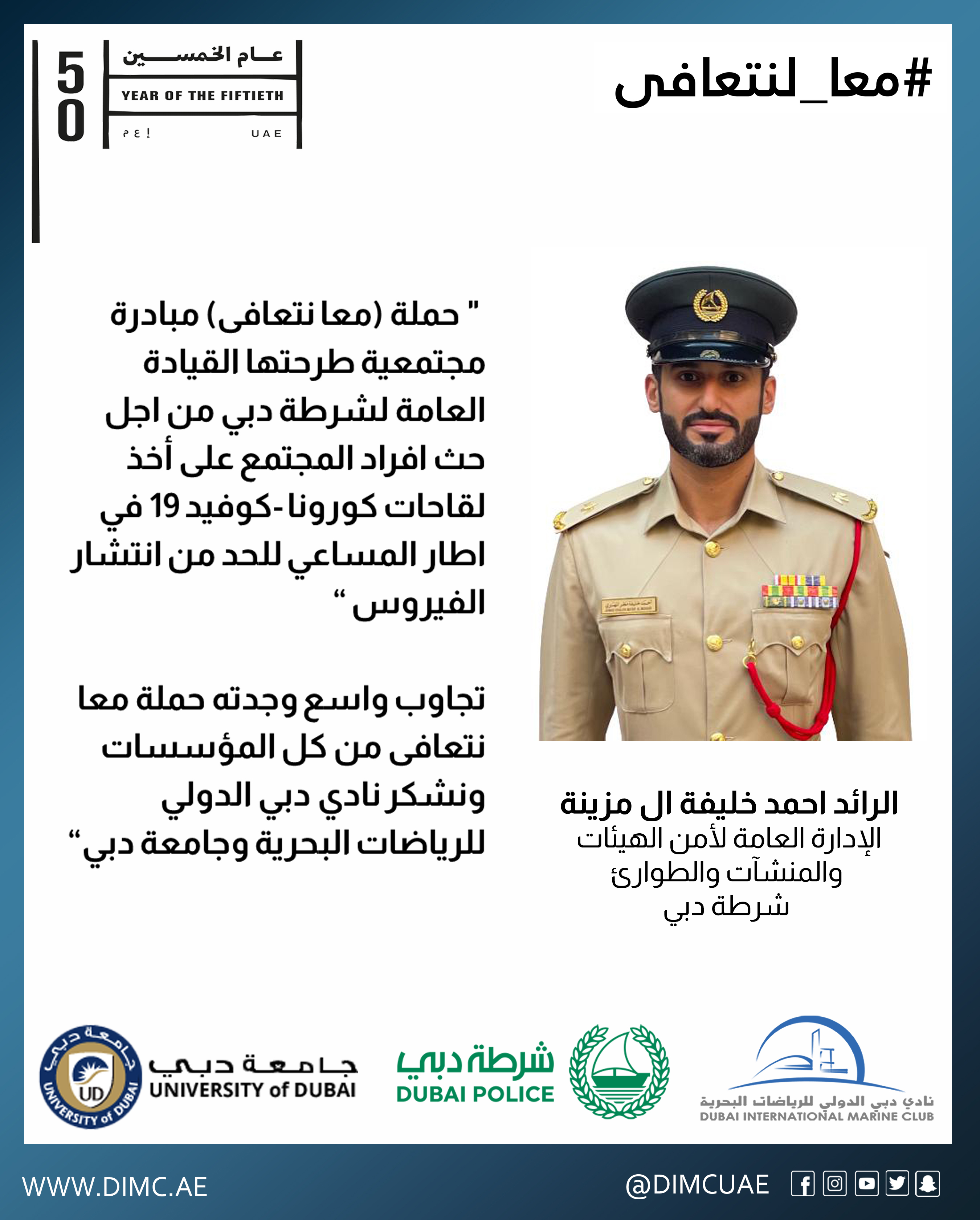 Major Ahmed Khalifa Al Mazina from General Administration of Bodies, Facilities and Emergency Security in Dubai Police said that the campaign “Together We Recover” is a community initiative to encourage everyone to take the Corona-Covid-19 vaccines as part of efforts to limit the spread of the disease, indicating that our country is thru its wise leadership provided the vaccine for all residence and its free of charge.

He added that the General Command of the Dubai Police and within the framework of its enthusiasm to participate in encouraging the various group of the community to take his part. And to implement the directives of His Excellency Lieutenant General Abdullah Khalifa Al Marri, Commander-in-Chief of Dubai Police, Major General Abdullah Ali Al Ghaithi, Director of the General Administration of Bodies, Facilities and Emergency Security, launched its campaign that found the response from all institutions during the past month and to continuously reach out to everyone. He also praised the role of the Dubai International Marine Club, which contributed to the production of the promotional campaign and also the participation of students from the University of Dubai. Dr. Nasser Al-Marqab, Vice President of the University of Dubai for Administrative Affairs, stressed the importance of the societal role of universities that the University of Dubai is keen to impart on the importance of taking the "Covid-19" vaccine , pertaining to its role in the family, school and university in spreading awareness and health education among children by following the correct health behaviors and practices and to contribute to immunizing society in all its categories from the disease and limiting the spread of the virus.

He stressed the importance of intensifying the awareness and to adhere to all the preventive measures against the seasonal and contagious diseases, indicating that this can only be done through the solidarity of the concerned of the community and institutions to create a generation and a society that is aware and educated of the nature of these diseases.

He pointed out that the indolence in real adherence to these instructions by any individual can endanger or expose his family members and close associates to infection with the virus, and this requires sensing the extent of the national responsibility and awareness of the consequences of not adhering to all precautionary measures in addition to taking the appropriate vaccine.

He said that the health culture of young people and students is a great importance, as they represent an important proportion and segment in the society, and therefore it is necessary to focus on raising the awareness and counseling to set the concepts of healthy behaviors and keeping them away from wrong ones.