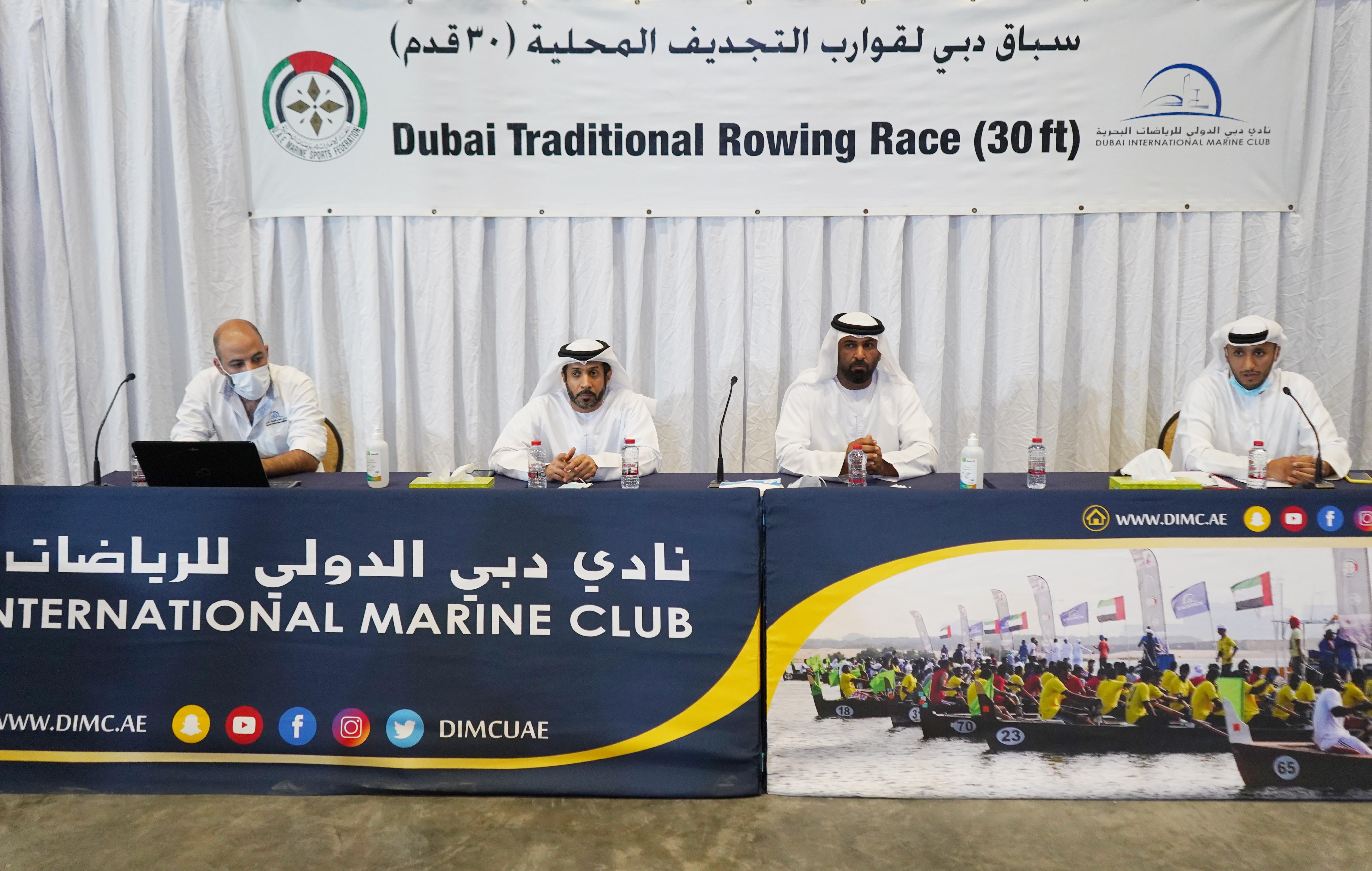 The Dubai Traditional Rowing Race (30ft) is organized by Dubai International Marine Club since 1997, this time the renewed boat style is anticipated in the start of the new series under the season 2020-2021 which is set to launched in Friday, 27th of this month.

The club sports committee held a meeting between the owners and skippers participating in the said event which is a an ancient/traditional sports. The committee is headed by Rashid Thani Al Aail, board member of the club with presence of its committee members Jamal Zaal bin Kreshan , boar member of the club and Hezaim Al Gemzi , the Director of the Sports Department at DIMC.

The meeting began with a speech by the head of Sports Committtee,  Rashid Thani Al Aail,  welcoming all the attendees and participants, conveying to them the greetings of the Chairman and Board Member of Dubai International Marine Club stressing that world is living in an exceptional phase due to the repercussion of the pandemic Corana Virus (COVID19) which required a more precautionary measure for safety of all the participants in the sports event including the marine races.

He said that the committee come up with a plan to make this season a successful one including the series of the Dubai Traditional Rowing Race which include 3 stages and the final round which is the Al Maktoum Cup , the most expensive race in the championship. He wishes also the best to all the participants and encourage them to adhere to the new rules and regulations.

Jamal Zaal bin Kreshan, a board member of the Dubai International Marine Club, confirmed during the meeting that the 30ft Dubai Traditional Rowing sport and races is a gateway to qualify in Olympic championship and a way to discover talents to represent the national tea in the International Rowing races.

Hezaim Al Gemzi , the Director of the Sports Department at the club give a glimpse of the new modification in the boats which ensure a social distancing that provide a safe distance for each boat crew. The weight should be open to facilitate the task of the participants, according to which the skippers and owners have been informed prior in order to prepare the bearings of the boat.

During the meeting, the Sports Committee listened to the views and suggestions of a number of owners and co-owners participating in the championship, who unanimously praised the historical role of the Dubai International Marine Club, which launched this category with the support and blessing of His Highness Sheikh Hamdan bin Rashid Al Maktoum, Deputy Ruler of Dubai and Minister of Finance in 1997 wherein he first race was held in March with the participation of 16 boats.

The views and exchange of opinion with the Sports committee and owners/skipper pertains to implementing the new mechanism of the race and some proposed amendments. As well as the condition of the participant including the crew and the view of circumstances due to the pandemic. They also discuss of providing a chances/opportunity of participation for 2 to become a member of the crew which to be selected among the residents/communities provided that they present their Emirates ID.