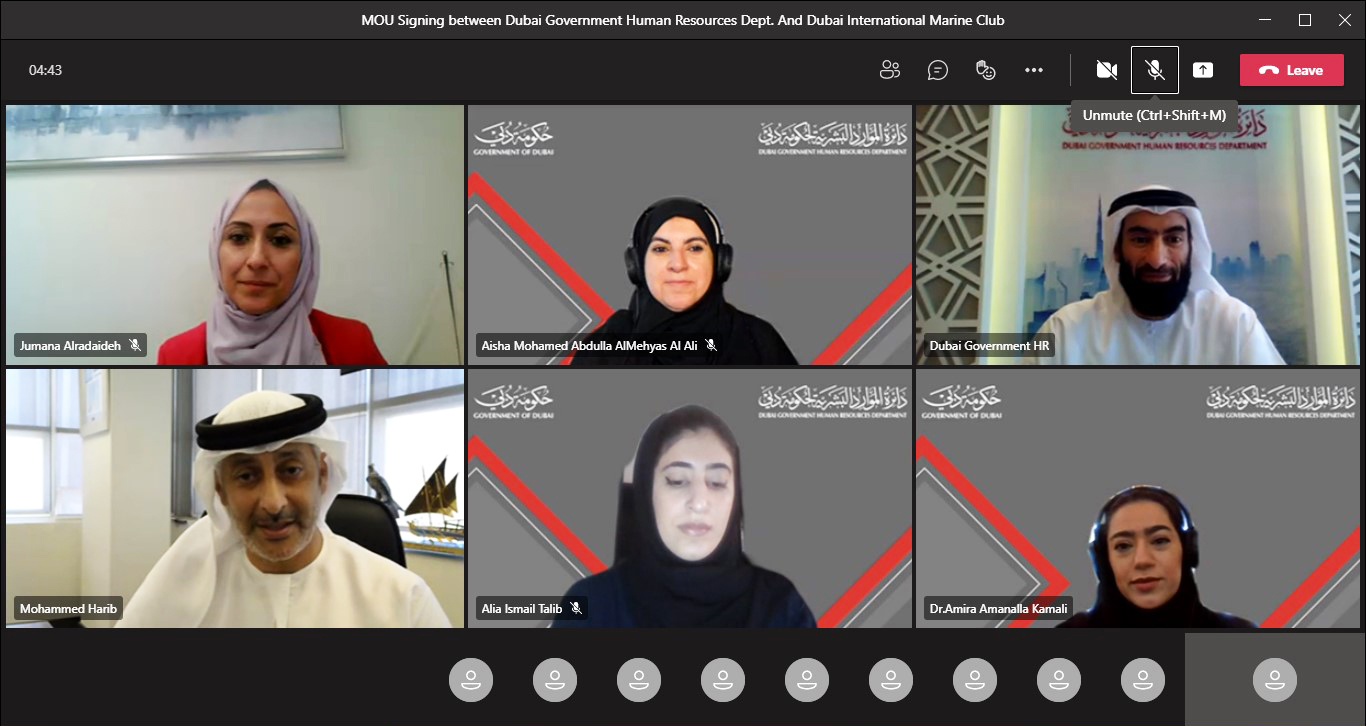 The Dubai International Marine Club (DIMC) and the Dubai Government Human Resource Department (DGHRD) signed a Memorandum of Understanding (MoU) on setting a general framework for cooperation and knowledge exchange in the field of human resources and enhancing cooperation in the fields of training and education and programs for preparing and qualifying competencies of various job groups.

The Memorandum was signed thru a virtual ceremony participated by His Excellency Abdullah Ali bin Zayed Al-Falasi, the Director General of DGHR Department and Mohammed Hareb, CEO of Dubai International Marine Club (DIMC). 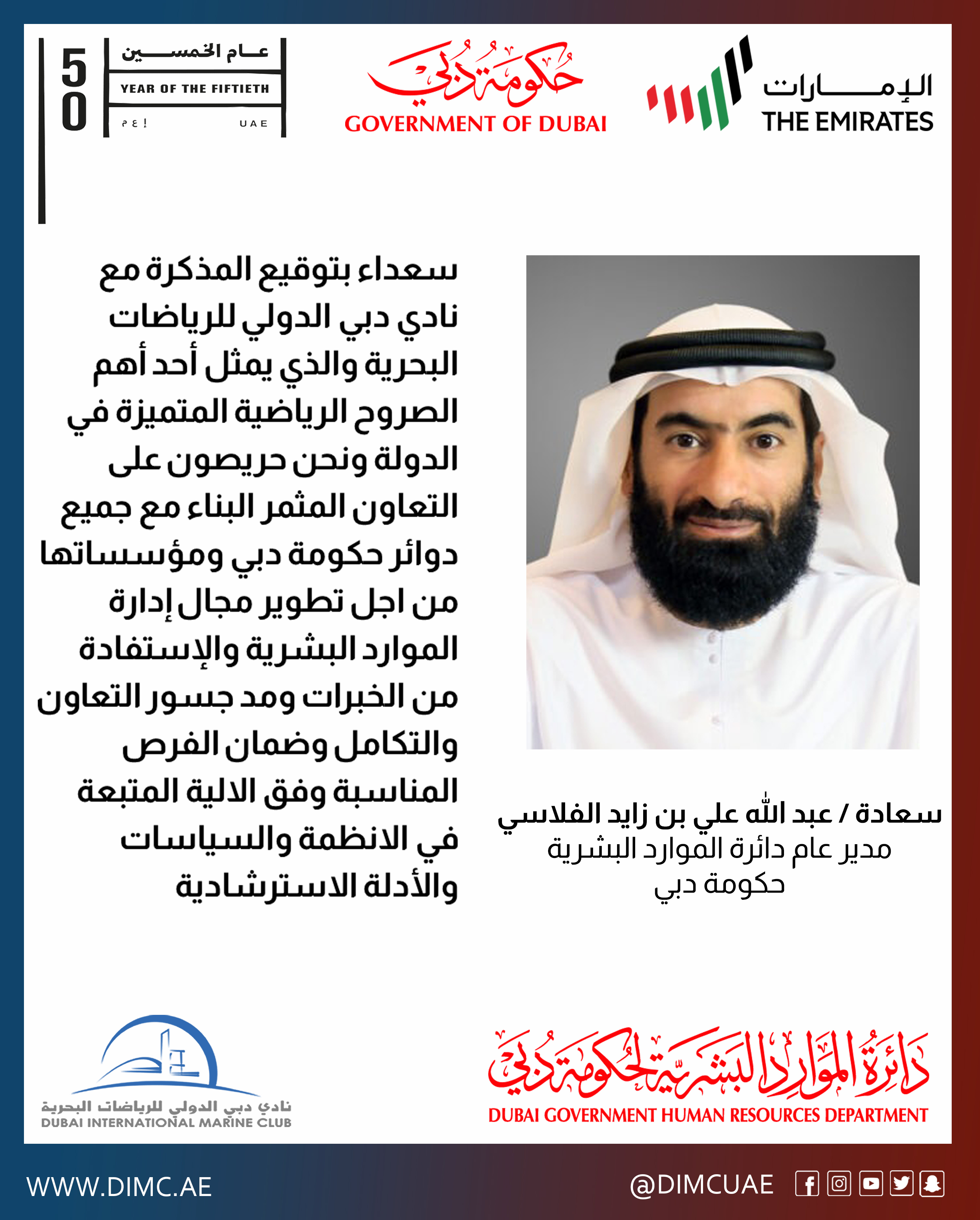 Abdullah Ali bin Zayed Al-Falasi, the Director General of DGHR Department, expressed his great happiness with the signing of the memorandum that opens up future prospect cooperation between DGHR and Dubai International Marine Club, which represents one of the most distinguished sports club in the country through its pioneering career and existing efforts since its establishment in 1988, as it clearly contributed to developing and refining youth skills by providing them a safe environment to practice their sport as well as its pivotal role in the development of the sports and heritage racing that represent their past culture.

Al Falasi said that the DGHR is keen to build cooperation with all Dubai Government Departments and institution including the Dubai International Marine Club, which is responsible for the watersports in the emirates. This agreement aims to develop the system in the field of Human Resource management by making use of their expertise and building bridges of cooperation in ensuring opportunities. The appropriate way to provide employees and workers with the appropriate qualification and design the various administrative programs according to the mechanism used in the regulations and policies. 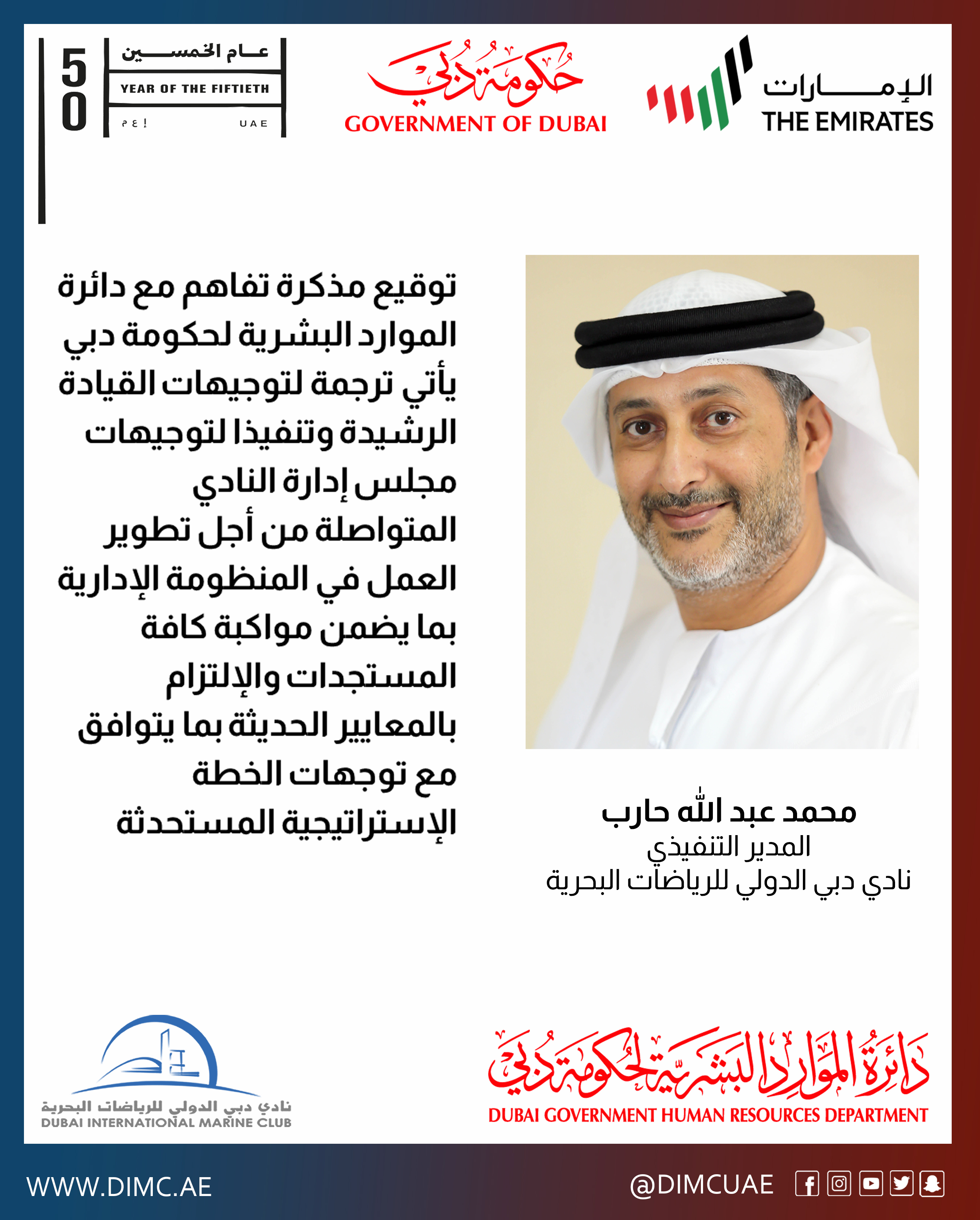 Mohammed Hareb, CEO of DIMC said : " The signing of this memorandum come under the directives and wise leadership of the club’s board members in relation to the development of work in administrative system in a way that will ensure the up-to-date development and adherence to the modern standards in line with the strategic plan of the club. He thanked His Excellency Abdullah Ali bin Zayed Al-Falasi, the Director General of DGHR Department and the department's team for the efforts and great cooperation that resulted in the signing of this memorandum, which undoubtedly will have a return on the club in the future, especially in the field of qualifying and refining human cadres and organizing work in the club to continue its pioneering role as one of the prominent sports club in the Emirates and in the Arab region, with its huge impact in the field of marine sports and considerably one of the earliest founded club.