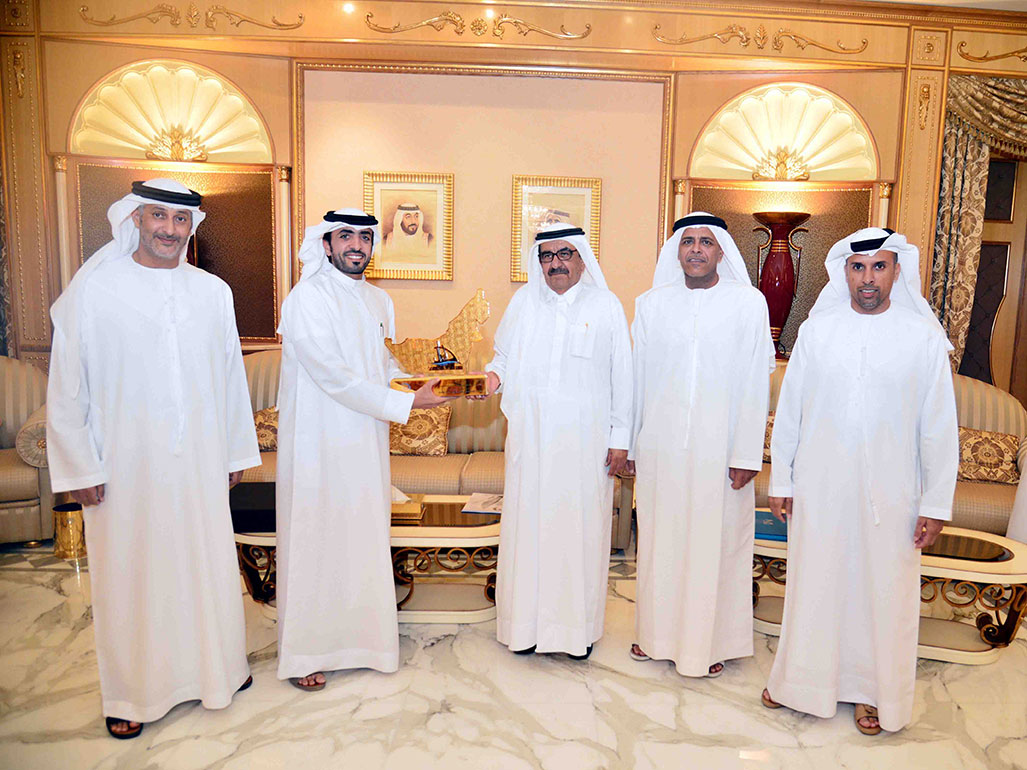 H.H. Sheikh Hamdan bin Rashid Al Maktoum, Deputy Ruler of Dubai and UAE Minister of Finance, yesterday received a delegation from the Dubai International Marine Club and the Supreme Organising Committee of the 28th Al Gaffal Race for traditional 60-foot racing dhows, which began at Seer BuNaeer Island and ended at the tourism port in Dubai, and was organised by the club and held on 14th May. The race’s organizing committee and participants thanked Sheikh Hamdan for his support. During the meeting, which was attended by Abdulrahman bin Mohamed Al Owais, Minister of Health and Prevention, and Humaid Mohammed Al Qatami, Chairman of the Board of Directors and Director-General of the Health Authority in Dubai, Sheikh Hamdan was briefed about a report presented by Ahmed Saeed bin Mishar Al Muhairi on the media coverage of the race. He was also briefed by the committee, as well as by participating mariners and sailors, about the events they witnessed during the race. Sheikh Hamdan praised the success of the race’s 28th edition in terms of its number of participants, as well as the interaction between the entire community, and the coverage of local and international media outlets. He also congratulated the race’s participants and winners and praised the efforts of government departments, national institutions and the race’s organising committee, especially for its decision to postpone the launch of the race from Saturday, 12th May to Monday, 14th May, which contributed to the race’s success. Al Muhairi said that the directives of Sheikh Hamdan, who is the race’s sponsor, contributed to its successful planning. Sheikh Hamdan received a special shield from Al Qatami, on behalf of the Dubai International Marine Club, its members and the race’s participants. Mohammad Abdulla Harib, Member of the Board of Directors and CEO of the Club, said that the shield presented to Sheikh Hamdan is painted in gold and contains the UAE map and Al Gaffal logo. The race saw the victory of the ship "Ghazi 103," which is owned by H.H. Sheikh Hamdan bin Mohammed bin Rashid Al Maktoum, Crown Prince of Dubai, Chairman of Dubai Executive Council and Chairman of the Dubai Sports Council, and was led by Shipmaster Ahmed Saeed Al Rumaithi, while second place went to "Buraq 33," which is owned by Ahmed Mohammed Rashid Al Rumaithi and led by his son, Shipmaster Rashid. The ship, "Altaf 9," which is owned by Mohammed Rashid Al Rumaithi and led by Shipmaster Khalifa Thani Abed Al Marri, came in third place.