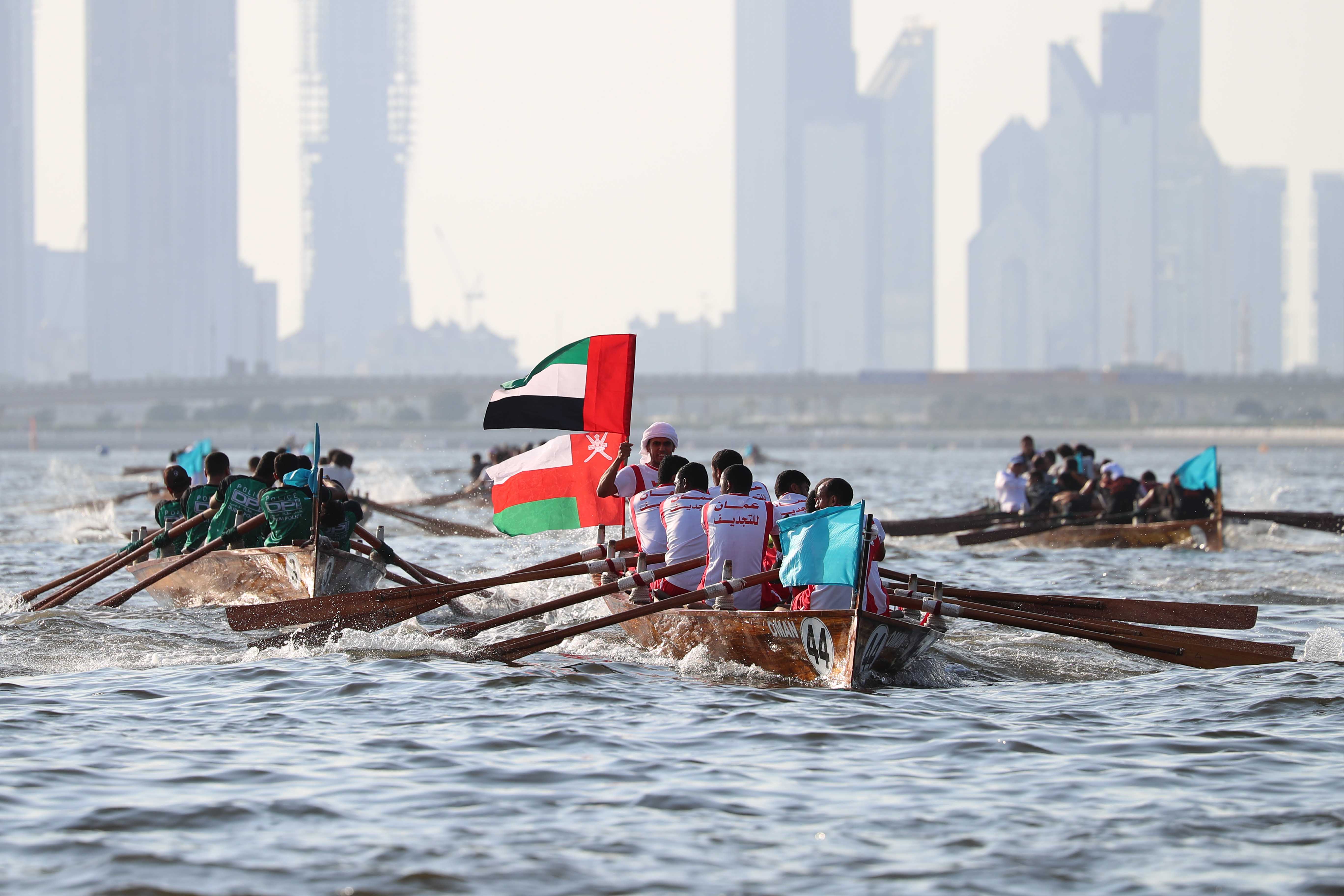 The DIMC launching of open class for Dubai Traditional Rowing Race  - 30ft was anticipated well by the sports enthusiast, participating government team, national institution and the people from GCC countries.

The second round of the Dubai Traditional Rowing Race - 30ft tomorrow will witness participation from the Kingdom of Bahrain and Sultanate of Oman which will raise the excitement among participants. For the first time, the club will organize the open class race based on the new rules in the race instruction that will increase awareness of Traditional Sports among the fans, institutions and companies.

The delegation of the Bahraini Committee for Traditional Sports arrived in Dubai last night which includes Khalid Abdulaziz Al Awadhi, the Vice Chairman of the Committee,  Ahmed Sabt Sanad, Chairman of the Committee for Popular Rowing Competitions, and Ahmed Abdulaziz Al-Shamlan, Director of Competitions, in addition to the boat crews of KHK54 owned by Sheikh Khalid. Bin Hamad Al Khalifa, led by Ahmed Al Busmait and the boat Victorius 53 owned by Sheikh Nasser bin Hamad Al Khalifa, and led by  Abdullah Khalifa Al Haddi, where the two boats will take on the challenge on Saturday.

The Dubai International Marine Club received a letter of thanks and appreciation from the Omani Marine Sports Committee at the Ministry of Culture, Sports and Youth for the great efforts and continuous cooperation in strengthening the bonds of the region by inviting them to participate in this event.

In a letter sent by Mohammed bin Ahmed bin Salem Al Ameri, Chairman of the Committee address to Mohammed Harib, CEO of DIMC states the participation of two boats for the first time in the name of the Sultanate of Oman in the race happening tomorrow, for the open class which will be held for the first time. The boat namely Oman 44 and Oman 96.

According to Humaid bin Salim bin Humaid Al Bahri, the captain of the boats Oman 44 and Oman 96 the race organized by DIMC is towards a renewable initiative including the launching of the open class for the Traditional Rowing Race Tomorrow.

"We are returning to this championship this season and we are eager to participate and achieve success especially in celebration of the Sultanate of Oman National Day which gives more encouragement to bring home the victory. Wayback in, Al Maktoum 2019 where the team topped the overall standings." Al Bahri added.

The sailors and owners participating in the second round of the Dubai Traditional Rowing Race welcome the initiative to launch the open race through the enlightenment meeting held last Monday which explained and introduced this initiative presented by the CEO of DIMC, Mohammed Harib.

2017-2018: The participation of the first national women's team in the UAE National Sports Day Race

2019-2020: Traditional Rowing Race organized for the People of Determination in cooperation with Dubai Police

2021-2022: The launching of the open class for the government, national institutions and GCC countries team