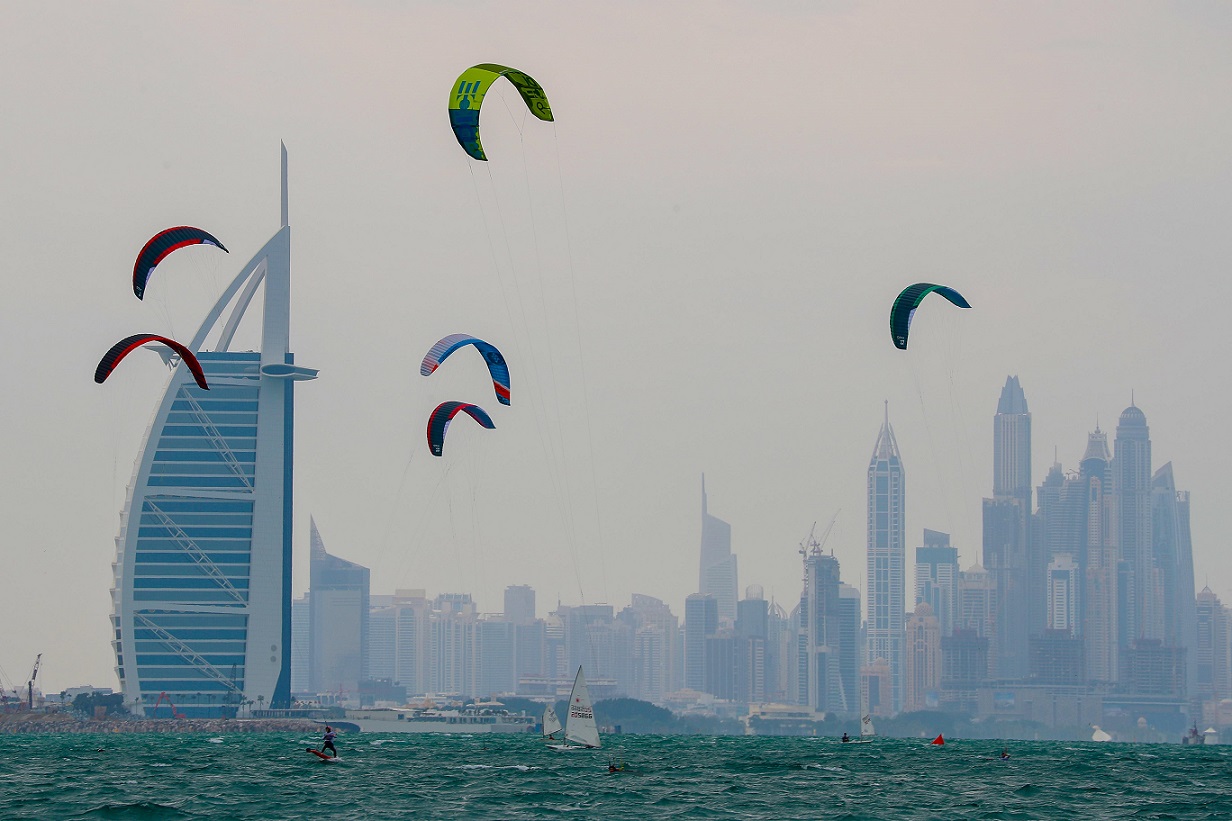 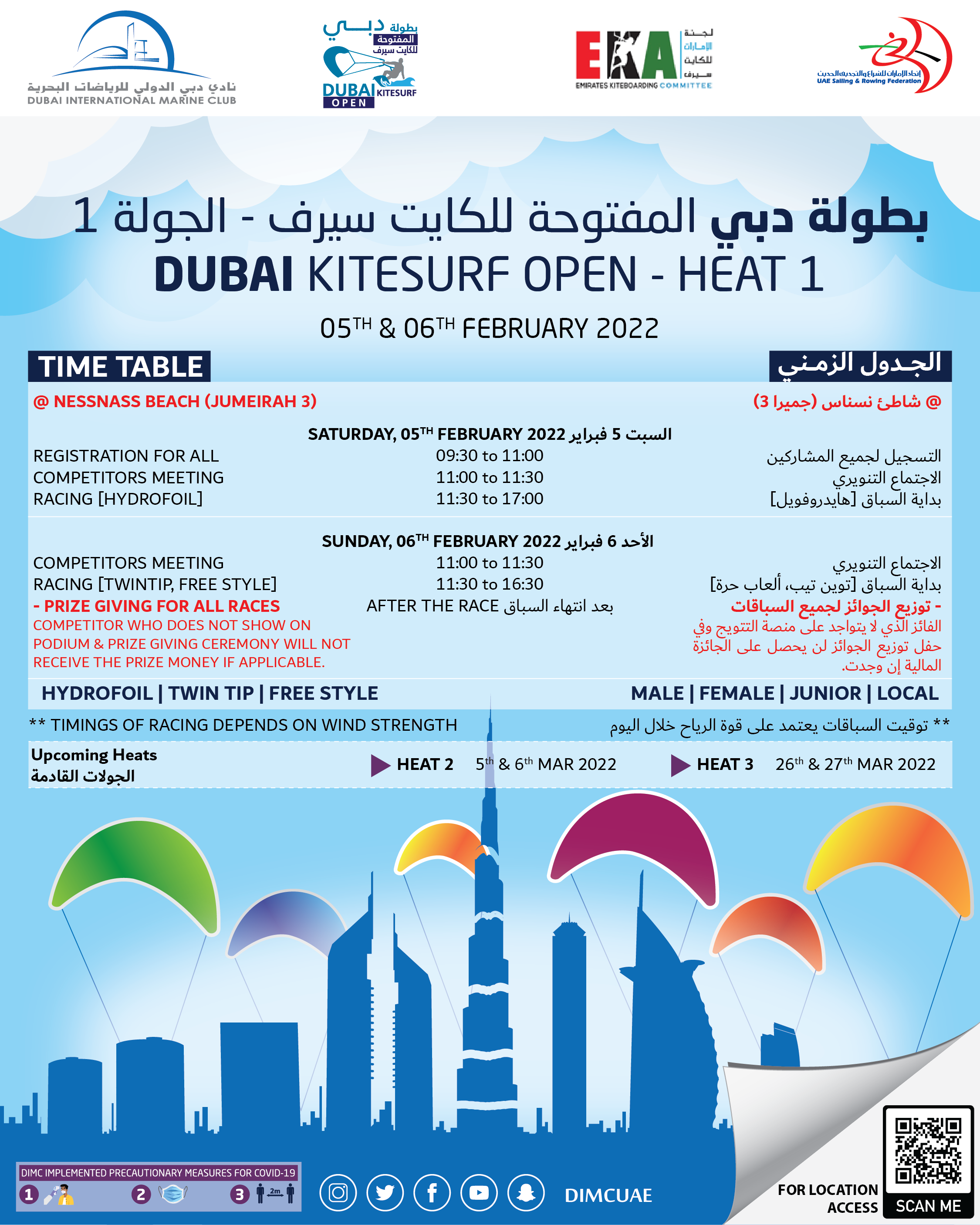 Witness the launching of the Dubai Kitesurf Open - Heat 1 on Saturday & Sunday  (5th & 6th of February 2022) at Jumeirah Beach organized by  Dubai International Marine Club in cooperation with the Emirates Kiteboarding Association (EKA) for the fifth consecutive season.

The first round of the competition is one of the three rounds scheduled for the sports season 2021-2022 and it also marks the beginning of the activities for the UAE Sailing & Rowing Federation (UAESARF) headed by Sheikh Ahmed Hamdan Al Nahyan.

The race is open to all the members of the society for men, women & juniors to compete in the following categories : Hydrofoil, Twin Tip & Freestyle which will be held for over the weekend . It is expected that the elite competitors and stars of our national team will participate in this event and will enjoy their time in the "most beautiful winter in the world" .

Sheikh Ahmed bin Hamdan Al Nahyan, President of the UAE Sailing and Rowing Federation would like to express his gratitude towards the Board of Director of the Dubai International Marine Club headed by Ahmad Saeed bin Meshar for the continuous efforts and contribution in promoting the Modern Sports in the country such as the Kitesurfing.

He said that he is looking forward to more activities & partnership with various marine sports club , that will provide opportunity in organizing such event and establish the national team in preparation for the Olympics. He believes that the Dubai Kitesurf Open is an important base/step to discover the future champions & talents of this sports that will lead the way to success in achieving the dream of an Olympic participation over the next years (Paris 2024).

He praises the achievement of the Dubai Kitesurf Open in the past four season where it attracted the elite racers in local and international level including the world champions upholding the goals of the Federation in motivating the community to participate and practice a healthy lifestyle.

Sheikh Ahmed said that the Federation will work closely for the improvement of the sports and to continuously coordinate with various marine club to include in the calendar of activities the moderns sports such as modern sailing, modern rowing and paddle boarding.

Dubai Kitesurf Open will return today in Nessnass Beach (Jumeirah 3) for the first round of the competition that will bring together the elite racers and enthusiast in the country.

Dubai International Marine Club organizes the said event in cooperation with the Emirates Kiteboarding Association for the fifth consecutive season now as part of the marine sports calendar 2021-2022 which include 3 rounds , the first one happening today and the rest of the rounds on March.

The club contributed even before to the popularity gained of this sports to the society nowadays, this exciting sports has received an international recognition by the Olympic Committee  as officially included in the Youth Olympic Games in Argentina 2018 and this one of the sports to look forward in the 33rd Summer Olympic in Paris 2024.

The first round of the 2022 Dubai Championship will be launching today with the Hydrofoil races as one of the three categories in addition to the Twin Tip & Freestyle which is scheduled tomorrow. As per the race timetable the activity will start with the registration of all the participants followed by the Competitors Meeting prior before the most awaited competition returns back to the waters of Jumeirah Beach , which is one of the location for the most beautiful winter in the world.

The organizing committee has confirmed thru National Center of Meteorology (NCM) that weather forecasted this weekend is suitable for such kind of Competition wherein today the waves is expected to be around 1 foot and the wind speed will be around 4-9 knots while tomorrow (Sunday) the wave ranges from 5-7ft which excites more the participants.

He would like to acknowledge the existing cooperation between the DIMC and the national department and institution such the General Command of Dubai Police thru Ports Police Station, Dubai Municipality and the Emirates Kiteboarding Association for the partnership in the last 5 season.

The CEO of DIMC expresses his excitement over this weekend as the great weather in Jumeirah Beach particularly in the Kitesurfing area in Nessnass Beach is what would make the best area for the competition, that will add color to sky as the people enjoy their time in one of the most beautiful winter in the world.

36 Trophy will be distributed to the top 3 winners of each categories in Hydrofoil, Twintip & Freestyle which is divided into Male, Female, Junior & Local for the first round of the Dubai Kitesurf Open happening today(Saturday) and tomorrow(Sunday) at Nessnass Beach, Jumeirah 3.

The event was organized by Dubai International Marine Club under the current sports season 2021-2022 which achieved a success with more than 100 male & female participants from 28 countries all over the world that competed in within the 12 sub categories from Hydrofoil , Twintip & Freestyle.

A remarkable brialliance for our national team star Mohammed Obaid AL Mansoori who achieved first place in two categories such as the TwinTip and Freestyle in Dubai Kitesurf Open  -Heat 1.

For the men categories the first place went to the Columbian World Champion, John Perez Torres against the Lebanon’s Nour El Dandachli and the third place went to the Sri Lankan Mohammad Ajmal Khan. On the ladies categories, the Mauritians Charlene Michel took the first place against the South Korean Seohyun Hyun and the third place goes to Mariani Amanda of France.

It was a tough competition among the men in Freestyle as they all show up their amazing stunt in the air and taking over the first place again is the Columbian John Perez Torrez, who joined the Dubai Kitesurf for the first time. On the women freestyle categories Sara Douglas from Britain took the first place.

Abdulaziz Al Marzooqi succeded in taking the first place in the Hydrofoil Local categories against Abdullah Mohammed Harib (Second) and Mohammad Obaid Al Mansoori  (third) while in the Junior division Abdullah Al Muhairbi took the third place behind the champion Gabriel Kassas of Lebanon and Frederic Szczesny from Poland took the second spot.

In the Hydrofoil, the French men were in control after the World Champion Theo de Ramecourt took the first place against Lhez Arthur (second) and Christopher Fernhet (third). While in the Women the Czech Paola Mihalova took home the title against the South Korean Seohyun Hyun and the French Mariani Amanda (third).

The awarding ceremony was held right after the race in the second day with the presence of Sheikh Ahmed bin Hamdan bin Mohamed Al Nahyan, President of the UAE Sailing and Rowing Federation (UAESARF) and Colonel Dr. Hassan Suhail Al Suwaidi, Director of the Ports Police Station accompanied by Mohammed Harib, CEO of Dubai International Marine Club (DIMC) to handover the trophy & medal to all the top three winners in each categories.

The event was participated by the world’s top ranked racer, the 24-year old European champion, Theo de Ramecourt from France, who won the first place in Hydrofoil Men’s Category.  Few months ago, he won also one of his World Title last 27th of November.

Ramecourt’s participation in the Dubai Kitesurf Open came as part of his training plan in preparation for the 33rd Olympic scheduled on 24 July – 9 August, 2024 in France. Looking back at the history of Kitesurfing Competition it made its first appearance in the Summer Olympics at the Youth Games in Argentina 2018.

The French, Theo de Ramecourt, 24, participated in Men’s Category in Hydrofoil Competition on the first round of the Dubai Kitesurf Open 2021-2022 wearing the vest no. 20.