Final Round of XCAT World Championship on Friday & Saturday

Dubai International Marine Club will organize on Thursday until Saturday, the second & final round of the 2021 UIM XCAT World Powerboat Championship - Dubai Grand Prix, bringing together the elite boats all over the world for another exciting challenge.

The event will be the conclusion of the global competition under the UIM, in which the club has been associated since 1992. The return of the long-awaited event in the calendar of Dubai International Marine Club after missing the season 2020-2021 due to the restriction imposed during the pandemic COVID-19. Way back in December 2019, the final round of the championship was held in Dubai wherein the Australian boat no. 12 Maritimo took the title.

Ahmed Saeed Meshar, DIMC Chairman praised the efforts of the club in pursuing the organization of the international headed by Rashid Thani Al Aail, the Chairman of the Sports Committee and Vice Chairman of the organizing committee at DIMC with the members: Jamal Zaal, Essa Nasser, Mohammed Harib, and Mohammed Al Marri.

The Chairman also expressed his gratitude to His Highness Sheikh Mansoor bin Mohammed bin Rashid Al Maktoum, the President of Dubai Sports Council for wise leadership and support in all the events.

He said that the club began the organization of the international event particularly this one way back in 2010 and continuously developed to innovate and commit to its role in making marine sports globally known. The launching of this event was held in the Emirates of Dubai and became popular during the era of success by the Victory Team.

He confirmed the club has started its preparation and will do the best to make the event a successful one, Dubai has always been the XCAT home and were the it was born.

XCAT roars loud as they return in Jumeirah Today

The roars of the XCAT engine rises today as they returned to Jumeirah beach for the Dubai Grand Prix, the second & final round of the 2021 UIM XCAT World Powerboat Championship organized by Dubai International Marine Club starting today, Wednesday until Saturday with the participation of 12 boats that will compete for the season title.

The registration and technical scrutineering will take place today as well as the free practice for the team to get to know the racecourse and track wherein the lap reaches 3.5 nautical miles and the long lap will be 4 nautical miles.

Rashid Thani Al Aail , Board Member of DIMC, Chairman of the Sports Committee, and Vice Chairman of the Organizing Committee welcomed all the participants in this global event as they returned after a year of hiatus brought by the pandemic. This event marks the continuos role of the club in organizing and hosting an international race.

He said that all preparations have been completed by the club prior to the start of the RACE 1 tomorrow, Thursday in which will attract the public to watch and tune in for the upcoming stages of the race.

He pointed out that the venue of the race came across the selection of showcasing the stunning skyline of the Emirates that is near to the Dubai Water Canal and next to the Sunrise Beach in Jumeirah. The racecourse will be around the World Island next to Sunset & Kite Beach.

Invitation to the public

The Chairman of Sports Committee humbly invites everyone to come and witness the race that is set to conclude this weekend from Thursday - Saturday with the thrilling race to the finals. He also pointed out the UAE to support the countries representative in the race such as the Victory 7, Dubai Police 3 , Abu Dhabi 4 and Abu Dhabi 5

Dubai International Marine Club honors the champion and participants of the Dubai Grand Prix, the second and final round of the 2021 UIM XCAT World Powerboat Championship which was hosted by the club in Sunrise Beach, Jumeirah over the last three days with the participation of 12 boats carrying 24 racers all over the world.

The grand ceremony was held at Westin Mina Seyahi wherein the coronation for the season champion was made after the successful first round in Fujairah then to Dubai the closing round. It's also the celebration of the 10th season of racing wherein the Emirati talents dominated the race.

The Dubai Police boat no. 3 crew, led by the duo Arif Saif Al Zaffain and Nadir Bin Hendi, received the gold medal for the champion of the tenth world of the race presented by the UIM President Raffaele Chiulli and Mohammed Harib, CEO of DIMC.

The Abu Dhabi boat no. 5 led by Rashed Al Tayer and Majid Al Mansoori were awarded second place in the overall standing while the Abu Dhabi no. 4 led by Faleh Al Mansoori and Shaun Torrente took third place.

For the Overall in Pole Position, the first place was taken by Abu Dhabi 5 followed by the Italian duo Mateo Nicolini and Tommaso Poli in the second place and the Abu Dhabi 4 for the third place.

DIMC receives thanks and appreciation from the XCAT organization

DIMC received thanks and appreciation from the XCAT organization who spent a couple of days on the stunning beach of Dubai during the Dubai Grand Prix - the second and final round of the 2021 UIM XCAT World Championship which concluded last Saturday.

The great international event was hosted in the Jumeirah beach and was participated by 12 international boats carrying 24 drivers from all over the world such as from UAE, Australia, Italy, Monaco, Russia, and Kuwait in addition to the local stars in the UAE.

Dubai International Marine Club received a letter of appreciation from the UIM (Union Internationale Motonautique ) for the organization success achieved by the final round of the XCAT World Powerboat Championship 2021- Dubai Grand Prix that concluded on 9-11th of December on Sunrise Beach with the participation of 12 boats with 24 drivers from all over the world.

Thomas Kurth, the Secretary-General of the UIM sent a message of thanks to the Board of Directors of Dubai International Marine Club, local organizer of the event for hosting it in 3 consecutive days in Al Shorooq Beach also known as "Sunrise Beach" that showcase the stunning cityscape of Dubai featuring the Dubai Water Canal and the Burj Khalifa.

In Gala Dinner held after the race attended by Dr. Raffaele Chiulli, President of UIM wherein he praises the club's effort in organizing such an amusing event.

It is worth noting that the final round of the XCAT World Powerboat Championship was dominated by Dubai Police 3 led by the duo Arif Al Zaffain and Nadir Bin Hendi who has been crowned as the 2021 World Champion. And remarkably, the club was able to make the boat parade in Dubai Water Canal for the first time showcasing the Jumeirah side towards the Business Bay area. 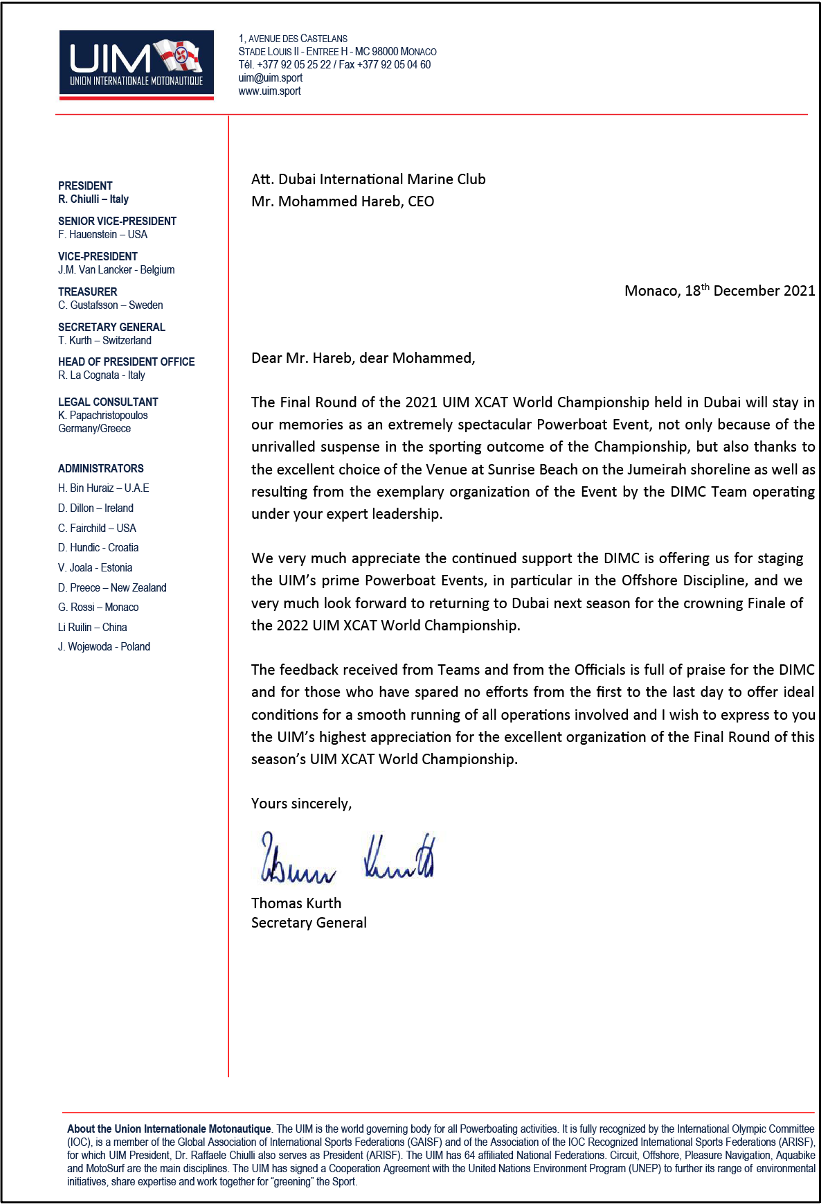