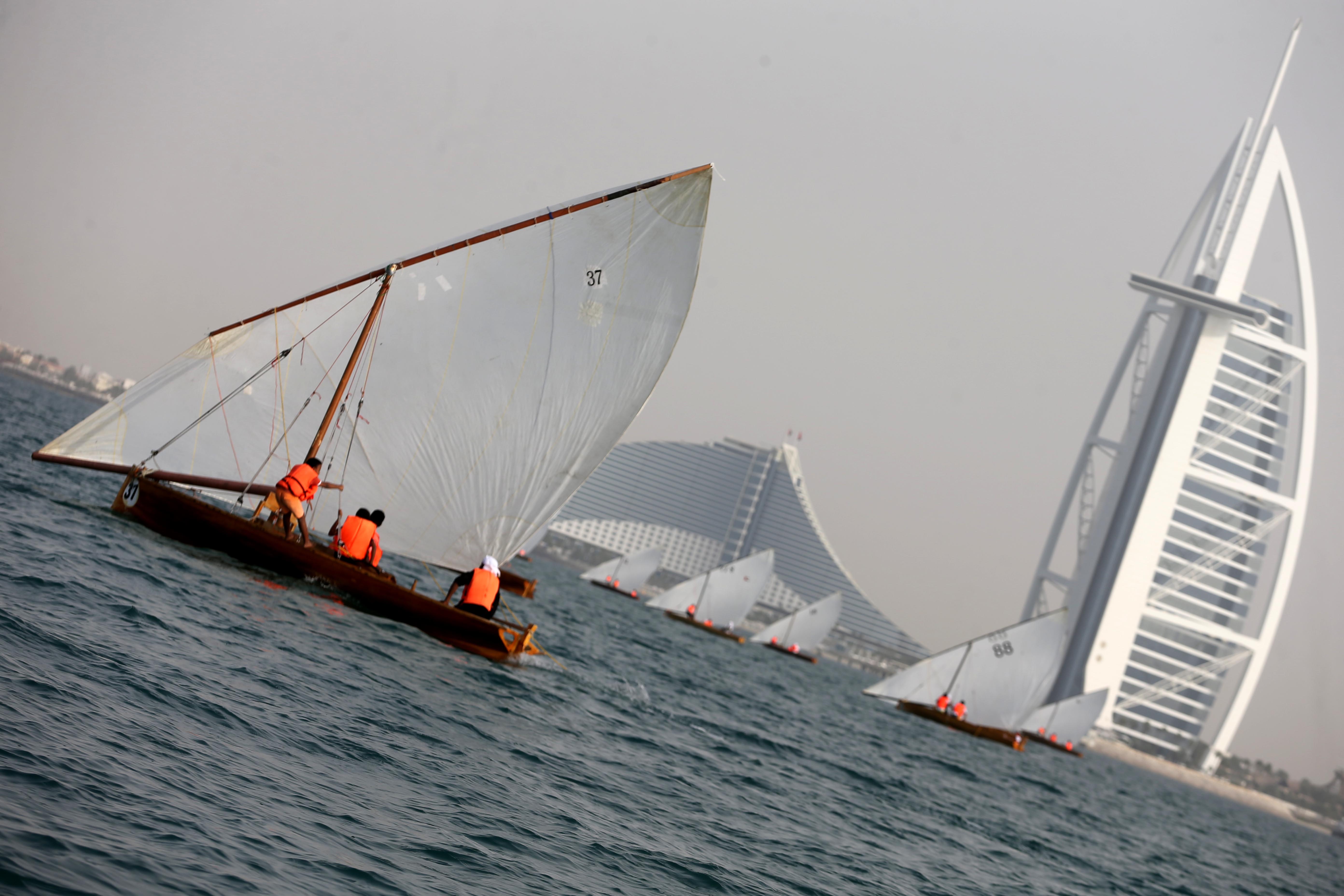 Jumeirah beach will witness today the first round of the 22ft Dubai Traditional Dhow Sailing Race which is organized by Dubai International Marine Club at 15:30 HRS under the new marine sports season 2019-2020.

Hezaim Al Gemzi , the Director of the Sports Department at DIMC said that today's race is one of the most important race that brings together a group of young people divided into two categories such as  the youth which ages 8-21 years old and the juniors 8-16 years old.


He pointed out that 22ft Dhow Sailing Race is the foundation of the generations to carry their parents and grandparents  heritage and culture whose lives has been linked to the sea as their source of good and livelihood.

He confirmed that the organizing committee has announced earlier since the beginning of the week (Sunday) that the registration is open for all who are interested to participate in the club headquarter or via the link that was sent to them via SMS wherein the registration continues until yesterday and set to release the entry list of participants.  And to continue the remarkable success of the club for the past two event the 43ft Dhow Race which the held last 7th and 21st of this month.

As per today's race ,  the Director of the Sports Department at DIMC said that the race distance is more than 4 nautical miles and is expected to be in the shore of Jumeirah and invite the public to follow the stages of the race that will add thrill and excitement to the competition.

The 22ft Dhow Race was launched by Dubai International Marine Club with the blessing of His Highness Sheikh Hamdan bin Rashid Al Maktoum, Deputy Ruler of Dubai and Minister of Finance, which officially takes place on October 1, 1999 with the participation of 16 boats competing for the first place that went to the crew of Hiaf led by Rashed Mohammed Rashed Al Rumaithi.

The Dubai International Marine Sports Club's schedule includes two rounds of the 22ft Dhow Race wherein the first one is today  (Friday), while the second round is scheduled for next year (2020) at the end of February.

The race was able to gathered more than 40 boats to lined up in the shore of Jumeirah and sailed for more than 4 nautical miles carrying the flag for the “Dubai First Global Challenge 2019 “hosted by the emirates (Dubai) from 24-27 of October.

This initiative comes within the framework of the promotional plan and the joint cooperation between the club (DIMC) and the Dubai Future Foundation to raise awareness of the importance of clean ocean and the use of robot technology and artificial intelligence to face the threat of challenges facing the world, including issues of the marine environment.

The overall race was exciting as it started by racing off the flag with the logo of the Dubai First Global Challenge as part of their promotional campaign with the presence of Mohammed Al Sharhan from Dubai Future Foundation whom watches the dhow as it sails toward the finish line.

Al Asifa 118 dominated the race in general and particularly in the youth category from the beginning wherein the crew was able to find the suitable strategy leading them with a strong pushed to the finished line getting off the top spot.

In the junior category, winning the first spot of the top 3 is the boat no. 79 Al Fahad which is owned by Jasim Mohd. Ahmed Ma'ayouf and led by his son Mohamed Jasim Mohamed Ma'ayouf surprising everyone with a great win and all thanks to his crew and leadership.

Right after the race is the awarding ceremony for all the winners, held in the vicinity of P&O Marina in Jumeirah 4 led by the presence of Mohammed Harib, the DIMC Board Member and CEO with Hezaim Al Gemzi , the Director of Sports Department at DIMC and Mohamed AlSharhan from Dubai Future Foundation to congratulate and handover the trophy to the winners of the 22ft Dubai Traditional Dhow Sailing Race – Heat 1