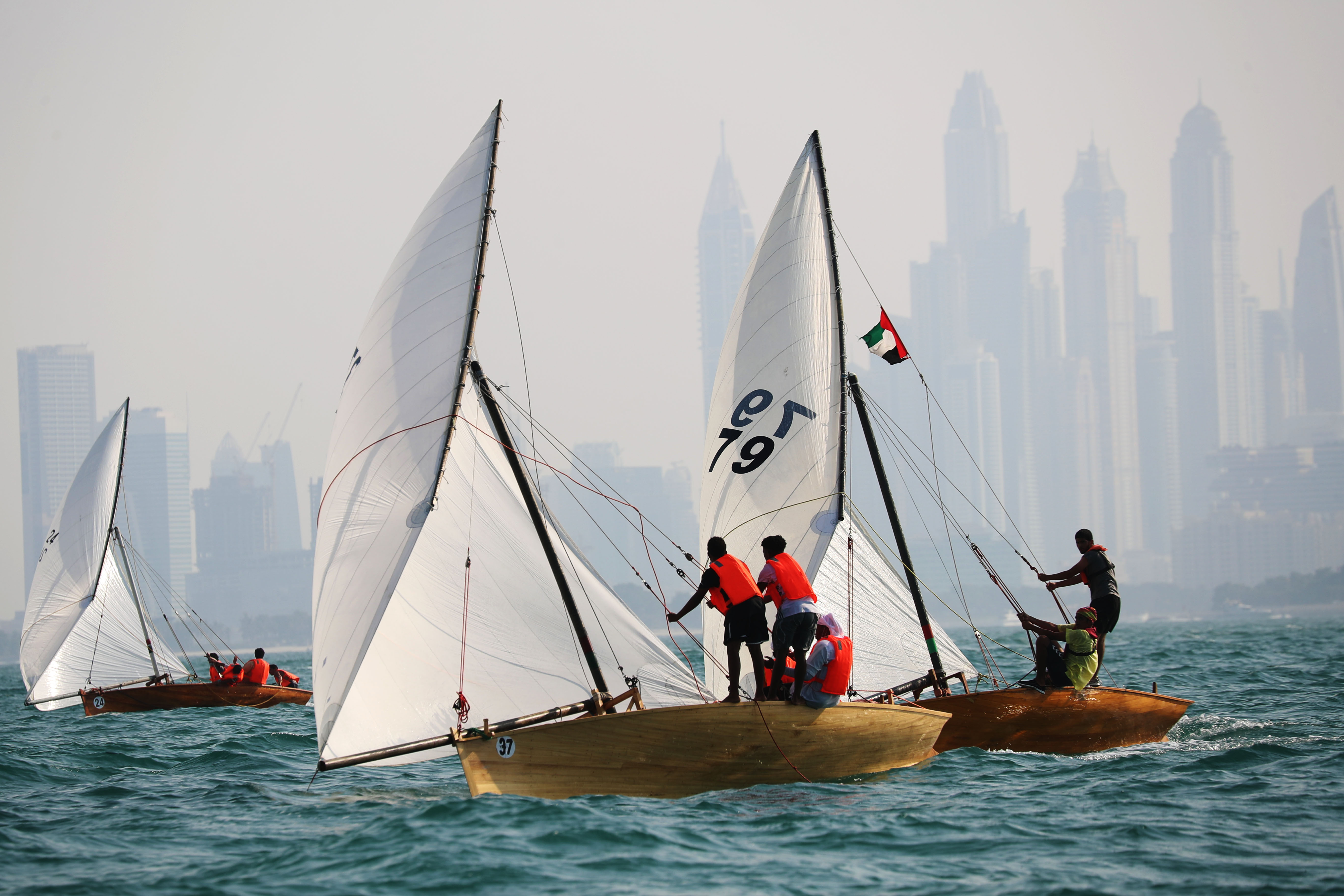 Jumeirah Beach will witness on Saturday another Traditional Sporting Event with the launching of the third & final round of the Dubai Dhow Sailing Race (22ft) which is organized by Dubai International Marine Club in conjunction with the 51st UAE National Day.

In line with that, the club has organized a series of activities and flag decorations at its headquarters near Dubai Harbour to celebrate the national occasion.

In preparation for the upcoming race, the club has notified yesterday all the racers regarding the opening of online registration until tomorrow (Friday) prior to the announcement of the entry list in the afternoon.

The organizing committee of the Dubai International Marine Club was keen to fully coordinate with the success partners from government departments and national institutions in order to succeed in organizing the race that will begin with the checking of boats & determining participant’s categories.

It is expected that this race will witness a huge participation since it’s the third and final round for this year Championship on the 22ft Category divided into Youth & Junior.

DIMC has successfully organized the first round last 18th of September  won by Al Zeeb 40 (Juniors & Sultan Al Khair 32 (Youth) while the second round took place on 26th of November won by Zilzal 125 (Youth) and Al Fahd 79 (Junior).

Jumeirah Beach will witness another Traditional Sporting Event today with the launching of the third & final round of the Dubai Dhow Sailing Race (22ft) which is organized by Dubai International Marine Club in conjunction with the 51st UAE National Day.

It is expected that the race will gather today more than 30 boat participants that will sail in the water of the Arabian Gulf between the beaches of Burj Al Arab Hotel and World Island for a distance of more than 5 nautical miles wherein today's sea conditions & wind will determine who will reach first the finish line.

Today's boat participants will carry the distinctive names from the legacy of their fathers and forefathers which they will continue such as the boat Shaiem, Al Reem, Rasas, Ghazi, Hujuom, Mureb, Shadeed, Eklaa, Al Dafrah, Al Saey, Rabdan, and Al Zeeb.

The 22ft Dhow Sailing Race was characterized by the spirit of excitement and challenges it serves as an academy for the future champions in the sport of traditional sailing.

The goal of winning first place will not only be the goal of the participating sailors as well as to be crowned winner in conjunction with the 51st UAE National Day celebration that will eventually lead them to the top position for the overall championship in this category for the season 2022-2023 that reaches the final round today.

The Race Director, Mohammed Al Marri who is also an acting Director of Sports Affair said that the committee’s preparation for the race has been completed successfully for today’s great race which is being held in conjunction with the celebration of the UAE National Day.

Al Marri explained that this category has gaining huge popularity among youth and junior so it’s expected to be a tough competition to achieve a success while he assures that the committee’s preparation includes coordination among strategic partners from government department and national institutions.

He reminded everyone that the race procedure will start at around 11 o clock in the morning to complete the boat checking and to determines boat category which is divided into two : Junior & Youth prior to race start between 1-2:00 o clock in the afternoon.

Toufan 21 owned by Ahmed Ismail Al Marzouki and skippered by Zayed Sultan Al Dhaheri was crowned as champion of the Dubai Traditional Dhow Sailing Race (22ft) - Junior Category,  the third and final round for the 2022-2023 championship which was held in conjunction with the 51st UAE National Day.

The race was successfully organized by Dubai International Marine Club last Saturday, with 150 sailors onboard on 36 boats divided into two categories: Junior and Youth.

The crew of Toufan 21 shows their sailing skill and strength that led them to the finish line first without doing any shift of sails beating all other juniors that arrived after them in which is boat no. 81 owned by Nahyan Ibrahim AL Hammadi led by Mohammad Marwan Al Marzouqi took the second position while boat no. 90 Al Reem owned by Abdullah Sultan Al Marzouqi and skippered by Sultan Mohammad Al Marzouqi.

The crew of boat no, 32 Sultan Al Khair won second place in overall and first in the youth category followed by boat no. 135 Rabdan owned by Mohammed Abdullah Saif Al Marrar, while in the third place went to Mefarej 131 owned by Ibrahim Saleh Al Hammadi,

Right after the race, the awarding ceremony for the top three winners of each category was held by Lt. Col. Ali Abdullah Al Naqbi, the Head of the Maritime Rescue Department at Dubai Police with him is Mohammed Al Marri , the acting Director of Sports Affair who congratulated & thanked all the participants for their support on the race.