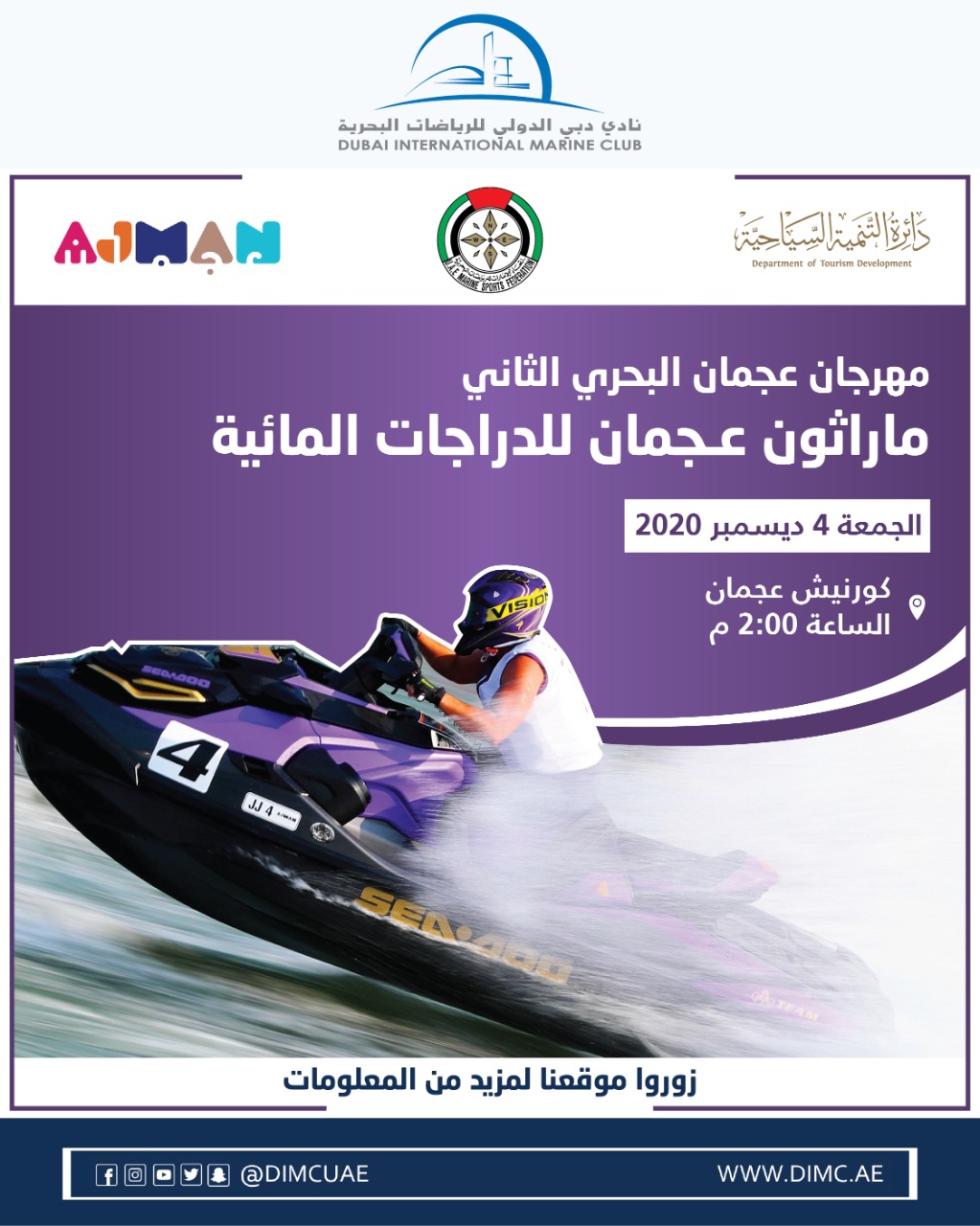 Registration now is open to participate in Ajman Second Aqua Bike Festival - Marathon Race that will held in Ajman Corniche on Friday 4th December 2020 via the link https://bit.ly/33qHGYA

DIMC receives thanks from the organizing committee of Ajman Aquabike Festival

The Dubai International Marine Club received thanks and appreciation from Sheikh Abdulaziz bin Humaid Al Nuaimi, Chairman of Ajman Tourism Development Department in appreciation for the great efforts made and provided by the club to develop the watersports in the country, he praises the great support made by the club in the success of the Ajman Aqua Bike Festival - Marathon Race on its second year held last Friday at Corniche Beach in Ajman. 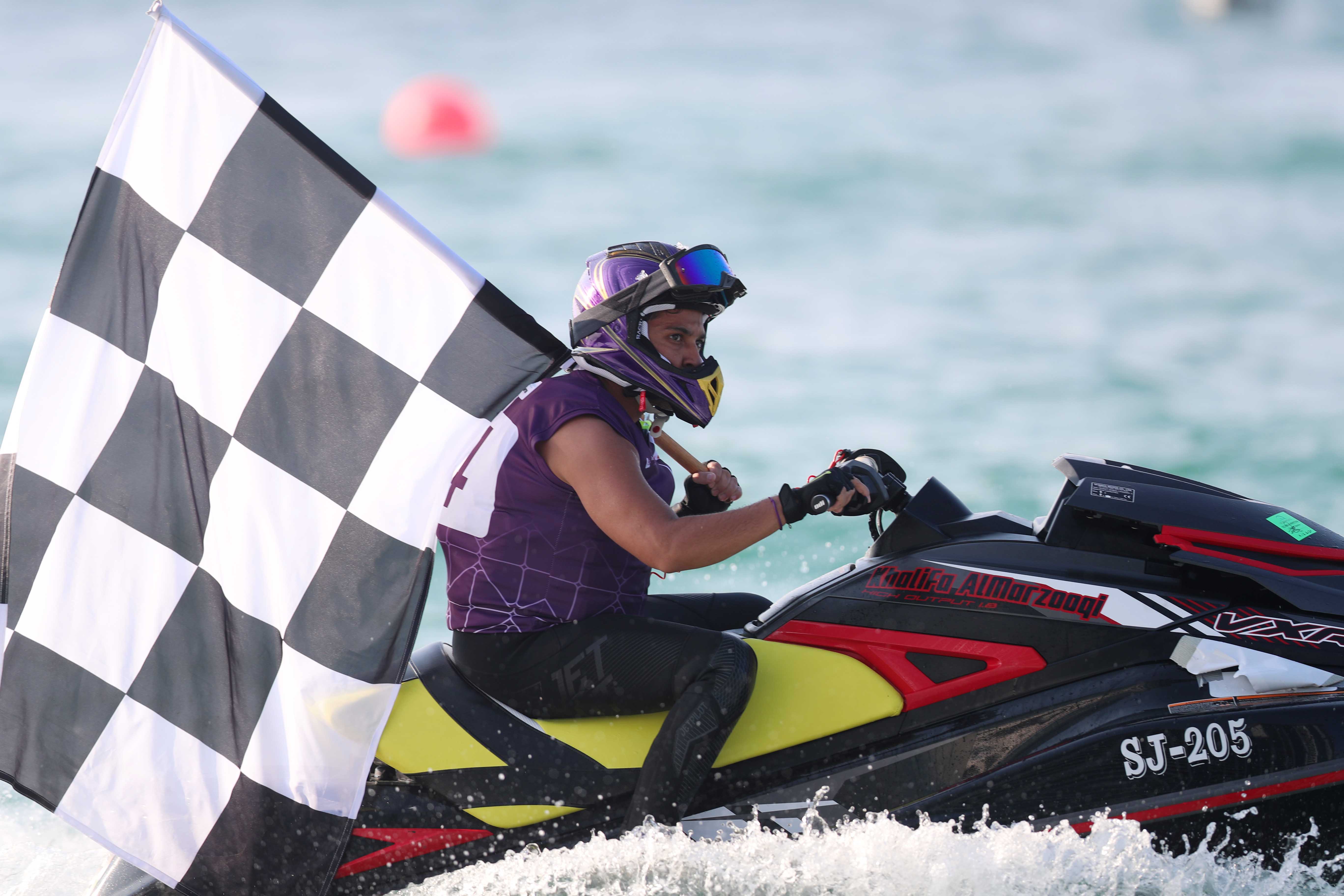 Sheikh Abdulaziz bin Humaid Al Nuaimi, presented a commemorative shield to the club, which was received by Mohammed Hareb,  CEO of DIMC during the closing ceremony of the festival, which included the Aquabike Marathon (Fifth & Final Round of the UAE Championship 2019-2020) organized by the Ajman Tourism Development Department in cooperation with DIMC and under the supervision of the UAE Marine Sports Federation (UAEMSF).

He praised the role of the Dubai International Marine Club in the success of the great festival that happen last Friday, indicating that the Technical Committee supervising the race make a distinguished effort and professional work all throughout the race which was seen as how the flow of the event happened. The Dubai International Marine Club has always been a pioneer in this field providing such initiatives.

The head of the Ajman Tourism Development Department expressed his happiness with this great and fruitful cooperation between the organizing committee of the Ajman Aquabike Festival and the Dubai International Marine Club, which continues successfully for the second year in a row and appeared in more than one activity, which greatly enhances the position of marine sports among various sports and attracts more than one talents, especially in the field of watersports.

The second edition of the Ajman Aquabike Festival (Marathon) witnessed a hug participation of stars and champion of the Aquabike in the country. As the result was announced Sheikh Abdulaziz bin Humaid Al Nuaimi no. 4 was champion of the 2019-2020 Aquabike Marathon for over 40 years of age (veteran) after achieving the third place in the final round adding 48 points in his score which top the standings with the total of 221 points which qualifies him to win the season title.

The participant Sultan Daoud Al Rumaithi win the first place for the Class Pro Categeory – Veteran up against his rival Mohamad Abdul Gaffar who took the second spot.On the other category for Class Pro – GP1, 2, 3, Salman Younis Abdulwahid Al Awadhi top the first position in ski no. 7 followed by Mani’ee Habib Al Marzouqi ski no. 13 and on the third spot is Salem Muhsen Saeed Al Yafeai on ski no. 14.

Mohammed Hareb , CEO of DIMC expressed his happiness in behalf of the club in the continuous and fruitful cooperation between the club and the Ajman Tourism Development Department in organizing the second edition of the Ajman Aquabike Festival stressing that the club under the directives of the Board of Directors headed by Ahmed Saeed bin Meshar is keen to have a cooperation to all, that includes providing or serving the public interest that reflects the club role in developing the marine sports and various water sports in the country.