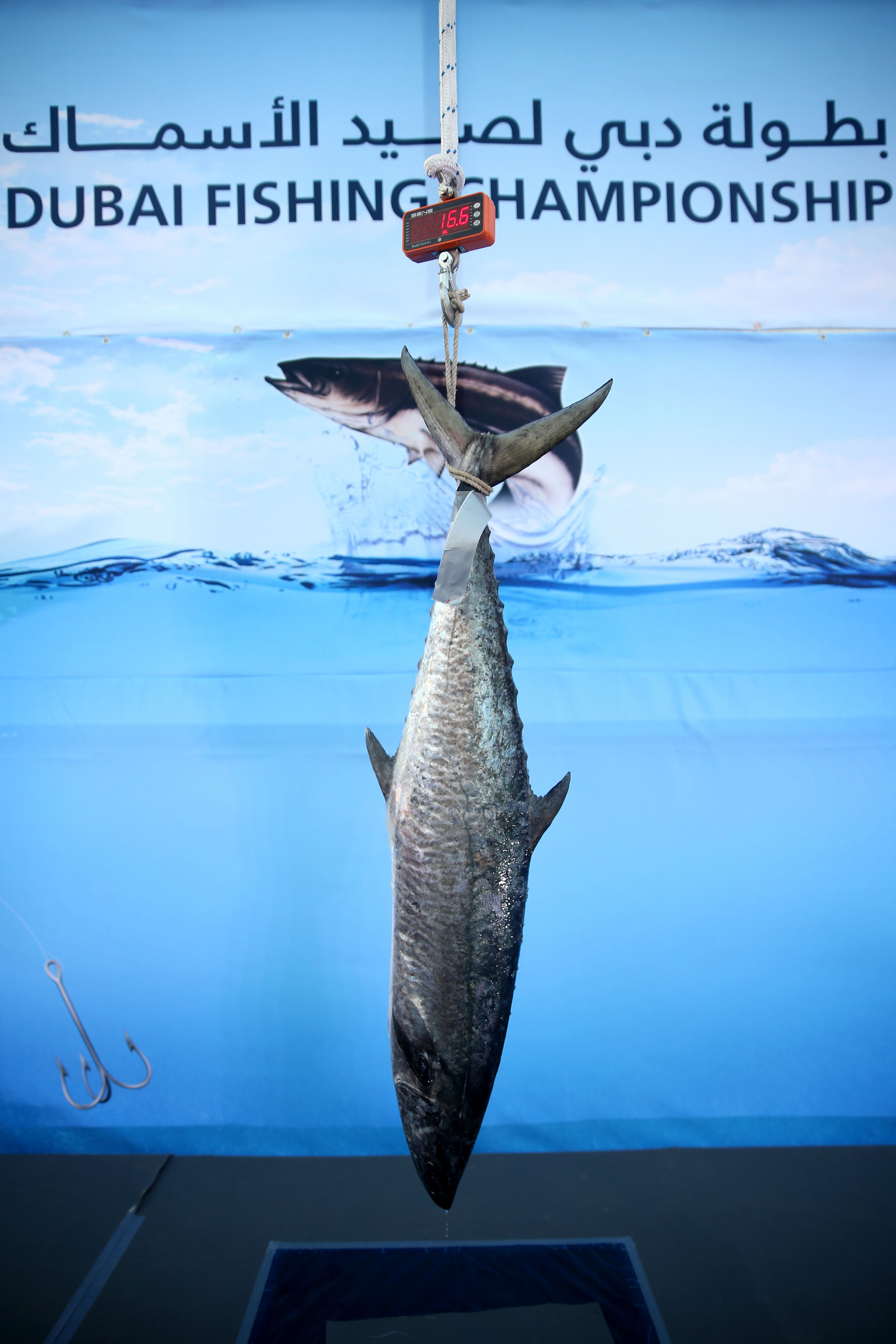 To watch the last race video : Dubai International Marine Club (DIMC) has announce the opening of the registration for those would like to participate in the second round of the Dubai Fishing Championship 2020 which is organized by the club under the marine sports season 2019-2020.

The competition includes two categories, the first one is the Kingfish and the second one is the Cobia fish category.  As per the SMS sent by the club which include link to register online and also state that the registration process and collection of stickers will start on Monday onward at the Club headquarter before the starts of the Competition on Tuesday to catch fish at allowed fishing timings and the handover process will start on Wednesday until Saturday from 16:00 HRS to 20:00 HRS at Jumeirah 5 (Fishermen Harbour 3) . The prize giving ceremony will be on Sunday on the same location at 18:00 HRS.

The second round of the Dubai Fishing Competition Kicks off today until Saturday which is organized by Dubai International Marine Club under the marine sports season 2019-2020.

The competition is divided into two categories the first one is the Kingfish and the second one is the Cobia Fish wherein yesterday (Monday) at the club held the registration process and collection of the stickers and race instruction prior to the start of the competition which is scheduled today.

The committee announced that the schedule for receiving / handover of catch fish will start on Wednesday in P&O Marina site in Jumeirah 5 (Fisherman Harbor 3 ) from 4:00 until 8:00 PM daily until Saturday the last day of the competition prior to the awarding ceremony to be held in the same site on Sunday at 6:00 PM

100 Participants for the Second Round of Dubai Fishing Competition

The organizing committee of the Dubai Fishing Competition - Heat 2 which was launched yesterday and held under the supervision of the Dubai International Marine Club under the marine sports season 2019 - 2020 announced that the club will award three additional trophy(shield) to the event.


During the registration process we witnessed a huge number of demands by the fishing enthusiasts wherein the committee decided to extend on the full day of Monday the registration and collection of Stickers.

The second round of the Dubai Fishing Competitions that started in Dubai from last Tuesday and will continue until Saturday. The blazing competition between more than 100 participants from the UAE citizens and resident.

The Dubai Fishing Championships competitions are held under the supervision and organization of the Dubai International Marine Club with the support of the national institutions, including Delma Marine ,P&O Marinas, Dubai Cooperative Society for Fishermen , DIBS and Sea and Sands.


On the first day of the handover of catch fish in the competition the contestant no. 24 Juma Khalifa Juma Alnabooda Alsuwaidi who catches a 36.15 KG of Cobia fish with a 143 CM length took off the spotlight for having the biggest fish of the day against  its competitor no. 48 Badar Siddiq Fatah Ali who was able to catch a 28.30 KG with 131 CM of Cobia Fish.

The second round of the Dubai Fishing Competition organized by Dubai International Marine Club within the marine sports season 2019-2020 that will run from 10-14 of March. And tomorrow at the headquarter of P&O Marina in Jumeirah 5 will be the awarding ceremony for the winner of the Dubai Fishing Competition after the committee approved and finally review all the video submitted by the fishermen that abides the rules and regulation establish by the club.

The competition started last Tuesday where it continues daily from the headquarter of P&O Marina in Jumeirah 5 wherein we witness a great turnout and all thanks to the effort of the organizing committee and the cooperation between the club partners and sponsored such as Delma Marine, P&O Marina , Dubai Cooperative Association for Fishermen, Sea and Sands Fishing and Motorcyle Trading

The attractive financial awards, gathered by the Organizing Committee and the supporting partners which in total of 280,000 dirhams that raised the enthusiasm of the participants, who strongly compete for the two categories : Kingfish and Cobia with a total of 112 participants among the UAE citizen and fishing enthusiast.


On the third day of the competition we witnessed a heated competition among the participants for the category of Kingfish wherein the contestant no. 51 Abdulwahab Salem Alhousni handover a 33.75 KG fish with 154cm height which is the biggest submitted fish on that day.

On the fourth place was participant no. 68 Ahmed Khalfan Obaid Almzrouei who succeed in catches a 30.55 KG Kingfish with 155 CM length up against the contestant no. 22 Eisa Darwish Eisa Almarri who catches 22.10 KG with a length is 139 CM.

43.85 KG Kingfish by Al Muhairbi took the Topspot for Kingfish

The competition was held under the supervision and organization of Dubai International Marine Club within the marine sports season 2019-2020 with the participation of 112 fishing enthusiast.

The last and final day of the second round of the Dubai Fishing Competition which was successfully organized by Dubai International Marine Club for 5 consecutive days with a huge number participation which exceeded 110 contestants among them are the UAE citizen and fishing enthusiast of the country competing in two category the Kingfish and Cobia.

The second round was sponsored and supported by  Delma Marine, P&O Marinas , Dubai Cooperative Society for Fishermen and Sea and Sands Fishing Motorcycle Trading in which they gathered around a quarter of Million Dirhams as a total prize money (cash and i-kinds).


On the last day of the Dubai Fishing Competition the distinguished Female Team "Al Namos" has submitted for the first time in the competition, the women team was supported by Delma Marine led by the contestant no. 87 Lamya Ali Mohamed Ali.

The Al Namos Team was successful in catching a 12.95 KG Kingfish with a length of 120 CM in their second consecutive participation in the competition.

Yesterday (Sunday),  held the Awarding Ceremony for the second round of the Dubai Fishing Competition organized by Dubai International Marine Club from 10-14 March 2020 under the marine sports season 2019-2020.

The competition achieved a huge number of the participation that reach up to 112 contestants that competed over the past days for the two category of Fishing : the Kingfish and Cobia abiding the rules and regulation implemented by the organizing committee. With a total prize of 280 Thousand Dirhams (cash and in-kinds prizes)

The competition was sponsored and supported by Delma Marine, P&O Marina, Dubai Cooperative Society for Fishermen, Sea and Sands Fishing and Motorcycle Trading that contributed in raising the competitors enthusiasm by providing financial and in-kind prizes.

The organizing committee collected a 736 KG of Fish (597.30 KG Kingfish and 138.7 KG Cobia) in which the profits will proceed to the charitable society in cooperation with the Dubai Cooperative Society for Fishermen who will take over the marketing (selling) of the fish and provide the club in return the area where it will be directed.

Salem Ahmed Salem Almuahirbi , participant no. 70 who catches the 43.85 KG and 165 cm Kingfish who topped the overall place for the Kingfish category. He took home a 25 Thousand Dirhams provided by the club in addition to that he received  50 thousand dirhams from Delma Marine, a one year free of charge wet-berth for a maximum 15m boat worth 45,000 AED and an electronic fishing rod by Sea and Sands worth 5,000 AED.

In addition to that the club provided a trophy for the following:

The awarding ceremony for the second round of Dubai Fishing Competition took place at the headquarter of P&O Marina in Jumeirah 5 attended by Hezaim Al Gemzi , the Director of Sports Department at DIMC , Khalifa Rashid Al Falasi the Director of Operations at P&O Marina, Ayoub Al Khaja, the President of Delma Marine  and Omair Bin Omair Al-Rumaithi , the Executive Director of Dubai Fisherman Cooperative Society and Ahmed Al Suwaidi the OOD.