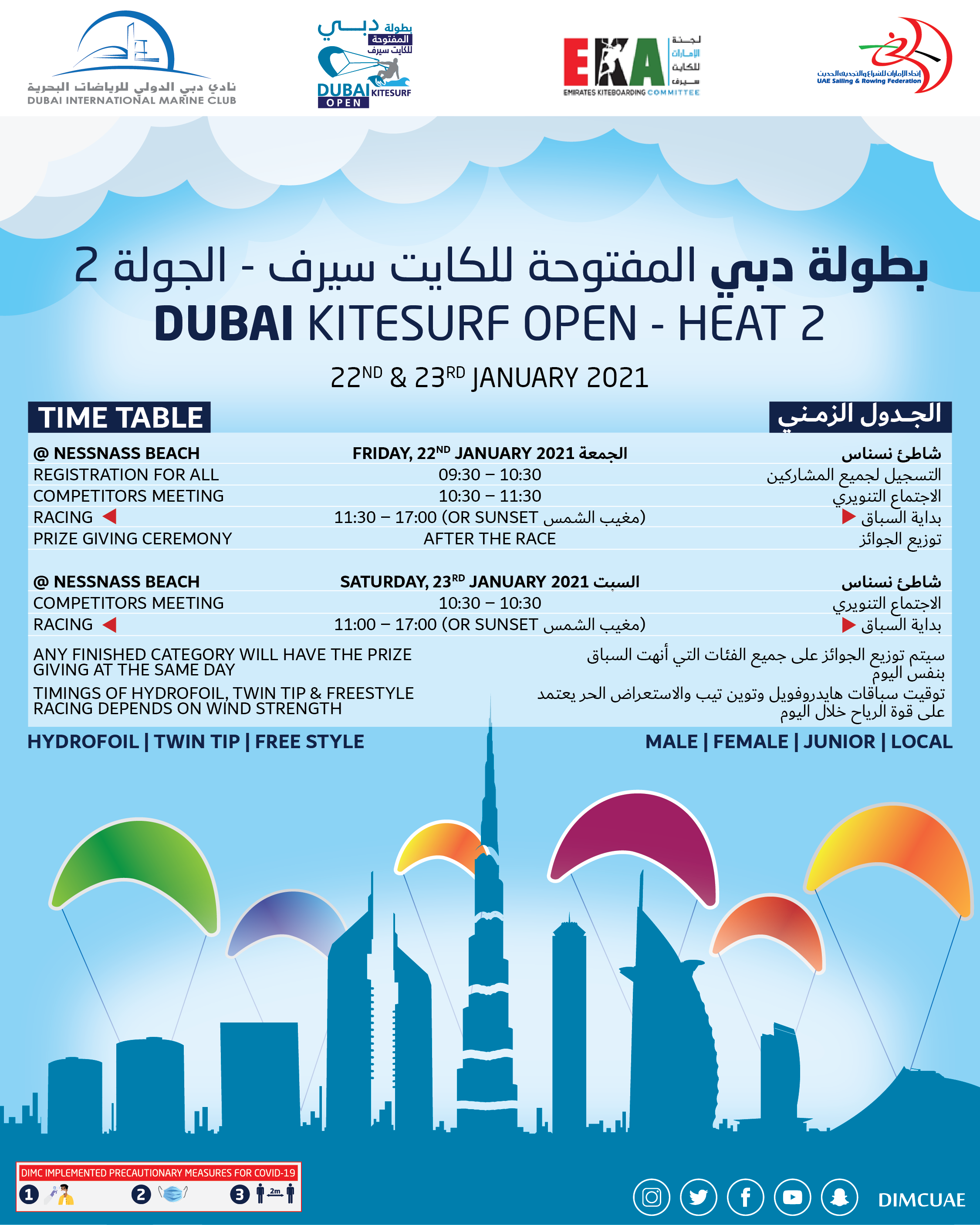 The Dubai Kitesurf Open attracted numbers of World Star in Kitesurfing led by the champion in Hydrofoil Category the Slovenian Toni Vodisek.

Vodisek participated for the first time in the competition during the first round of the Dubai Kitesurf Open which is organized by the Dubai International Marine Club in cooperation with the Emirates Kiteboarding Association with participation of more than 100 competitors representing 30 countries around the world in addition to the champions of the Emirates.

Slovenian Toni Vodisek considered as one of the most prominent rising stars globally in this sport in which he prepare to enter the Summer Olympics in 33rd edition (Paris 2024) after being approved last 2018 Summer Youth Olympic Games in Argentina where he won a Gold Medal.

He participated in the Dubai Championship wherein he took the lead in Hydrofoil category after recording the best in the seven round up against his top competitor Bulgarian Havdar Aleksawdrov who took the second spot and Clive Parson from Africa taking the third spot.

Vodisek expressed his happiness after participating in the Dubai Kitesurf Open noting that its important to stay fit after the suspension in the world championship due to the COVID-19 that include travelling from places and movement restriction.

"I did not hesitate for a moment to come to the Emirates (Dubai), accompanied by my mother, in order to participate and also enjoy the weather of the most coolest winter in the world," said by the Slovenian, Toni Vodisek. He also praise the effort of the organization and the great interest of the people in marine sport particularly in Kitesurfing that includes Hydrofoil Category.

Hazeem Al Gemzi, the Director of Sports Department at DIMC welcome the Slovenian World Champion Vodisek and all the champions participating in this sports indicating that the Dubai Kitesurf Open had gained its popularity which is the goal of the club wherein this season will have a 3 rounds for the elite champion to compete in its fourth edition held here in the world coolest winter in the world.

The organizing committee takes this opportunity to thank the associates and competitors for the success of the first heat. We hope to see you all soon competing in the second heat.

Second Round of Dubai Kitesurf Open on Friday & Saturday

The atmosphere of excitement and competition returns to the Dubai Kitesurf Open as the second round of the championship will be held on Friday & Saturday at Nessnass Beach in Dubai.

The highly anticipated event is being organized by the Dubai International Marine Club as part of the marine sports season 2020-2021 and in cooperation with the Emirates Kitesurfing Association for four consecutive year now.

The Dubai International Marine Club which was established in 1988 is  considered one of the clubs that first organize the tournament for this sports way back in 2005 with a large participation of the local and international racers.

The activity on Friday and Saturday will be the second stop in Kitesurfing Championship in the season as the club organized the first round in the first week of the month while the third and final round will be held on March.

In the current version of the Dubai Kitesurf Open for its fourth consecutive in the season , the club introduced monitoring of points system in order to get the position of the competitors after the end of the cha that aims to increase the public awareness of this sports and the interest of the racers with participation of the resident and international kitesurfer.

The second round of the Dubai Kitesurf Open was organized by Dubai International Marine Club that will start today at Nessnass Beach in Jumeirah that will conclude until tomorrow , the event is under the marine sports season 2020-2021.

The club completed all the necessary equipment needed for the race in coordination with the government department and national institution where in the said event was held in coordination with the Emirates Kiteboarding Association for fourth consecutive years now within the framework of the club to expand its activities to provide an atmosphere of competition for the fans and enthusiast of this sports among the local, resident and tourist of the country.

Nessnass Beach in Jumeirah has been a favorite spot for the lover of this sports and has put a wonderful scene in the world coolest winter in the world and in the first week of the month the club held the first round of the Dubai Kitesurf Open 2021 which include three rounds  this season as of the sports of its kind in the country.

The participants attracts people in the beaches of Jumeirah to witness and see as the colorful umbrellas of the kite as they rise up to the sky today within one of the world coolest winter . The event also attracted world stars that participated in the event last time stopping by to prepare for the upcoming 33rd Summer Olympic (Paris 2024).

It is expected that the wind speed for today and tomorrow will be good for the organizing committee and racers to maximize the competition to its fullest as it will starts from morning until evening of both days (Friday and Saturday).

The beaches of Dubai were known for the Kitesurfing sports even before the Dubai International Marine Club was the first to host the championship in the country wayback 2005 in Mina Seyahi.

Sheikh Ahmed bin Hamdan Al Nahyan, Chairman of the Emirates Kiteboarding Association praised the efforts made by the club Board of Director and their luminous imprints that draws history in the watersports through its various support in sports including the Kitesurfing.

Sheikh Ahmed bin Hamdan Al Nahyan praised the technical and organizational success achieved by the Dubai Kitesurf Open in its fourth edition through the clubs professional work and effort in organizing such event and the budget allocated for the sport.

The Chairman of the Emirates Kiteboarding Association indicated that the Dubai Kitesurf Championship, in its fourth edition, attracted great interest from fans of this sport, especially after the increase in rounds and the approval of general ranking points, which raises the excitement to all the participants.

He said that the EKA through its continuous cooperation with the DIMC is looking forward to develop various watersports event and race supervised by the committee including the Kitesurfing sports.

In the first day we witnessed the multiple race of Hydrofoil competition for the Local, Men , Women and Junior category in which the wind speed is suitable to establish and conduct the race in the morning and afternoon.

Today in the Dubai Kitesurf Open we will witness the competition for Twin Tip and Freestyle with the participation of the national stars and elite professional and amateurs in the Emirates.

Last Friday in Nessnass Beach in Jumeirah we witnessed the first day of the competition for the second round of the Dubai Kitesurf Open organized by Dubai International Marine Club for two days as part of the marine sports season 2020-201.

The event is organized by the club for the fourth consecutive season in cooperation with Emirates Kiteboarding Association (EKA) with a participation of more than 60 racers representing more than 20 countries all over the world who competed for the title in Hydrofoil , TwinTip and Freestyle category.

The event was held in accordance with the sports protocol issued by Dubai Sports Council wherein the organizing committee was keen to raise awareness among the participants and emphasize the importance of social distancing and as a precautionary measure the self-crowning ceremony have been applied for the first time.

The first day was dedicated for the Hydrofoil category wherein the racers (men, women, local and junior) competed for 7 rounds held in the morning and afternoon with the wind speed of 18 knots that helped the racers in achieving a tough and strong competition.

Ahmed Al Mehairbi snatched the spotlight in taking the leads in the Local Category ahead of Khaled Bel Jaflah who came second and on the third spot is Mohammed Obaid Al Mansoori.

Our rising star Abdulla Mohammed Harib Al Falahi shine in the Junior category of the Hydrofoil competition wherein he managed to get the second place after the the Labanese Gabriel Kassas who took the first spot while Frederick Szczisny on the third place.

Last Saturday , the second round of the Dubai Kitesurf Open concluded in Nessnass Beach organized by Dubai International Marine Club for over two days within the activities for the marine sports season 2020-2021.

Mohammed Obaid Al Mansoori and Rashed Ahmed Al Falasi took the lead in the closing day of the Dubai Kitesurf Championship with the participation of more than 80 competitors representing more than 20 countries from all over the world who competed for the title in Hydrofoil , Twin Tip and Freestyle category.

Al Mansoori perform at his best against his companions from the local team in the Free Style category in which he shows his great skill in surfing with the wind against Rashed Ahmed Al Falasi who took the second spot and the third spot by Ahmed Dhahi Al Mehairbi.

Our rising champion Abdulla Al Mehairbi continues his journey achieving the third place in Freestyle category behind Fryderyk Szczisny who took the first place and Gabriel Kassas the second place.

Rashed Ahmad Al Falasi succeed in taking off the first place in Twin Tip category for local while the Mohammad Obaid Al Mansoori took the second spot and Ahmed Al Mehairbi in the third place.

In the rest of the categories for the Junior Twin Tip Gabriel Cassas won the first place which witnessed the participation of 8 champions among them the future stars Saif Nasser Al Neyadi (fourth) , Abdulla Harib Al Falasi (sixth) and Abdulla Al Mehairbi (seventh).

In the men's category for Twin Tip the Lebanese Louia ElDandachly surpassed all his 21 competitors while in the women Charlene Michel took the lead.

The competition leave a positive remark last weekend for all the fans of these sports despite the weather conditions and the wind speed reaching up to 17 knots that bring excitement to the participants. The competition brought together more than 100 participants from 22 countries all over the world, enjoying in one of the world coolest winter.

The Dubai International Marine Club succeed in organizing this exceptional championship for four consecutive years now in cooperation with the Emirates Kiteboarding Association (EKA) that includes three rounds this year wherein the first two rounds happened in the month of January and the closing round is scheduled on March. The photo reflects the exquisiteness of this sport held in Nessnass Beach in Jumeirah