Dubai International Marine Club (DIMC) will organize on Friday, 23rd of December the 26th edition of the Al Maktoum Cup Traditional Rowing Race - 30ft as the last activity of the club in the year 2022.

Remarkably the race was held for the first time in 1997-1998 and held annually since then wherein the top 20 boats from the result of the first & second rounds will compete in first place for this season's championship.

The 20 boats will be divided into two categories the Local and the Open Class Run which is for the boat coming from the GCC countries, Government Departments, and National Institutions.

Al Maktoum Cup Traditional Rowing Race -30ft is one of the ancient heritage sports organized by the DIMC started off in 1998.

The great event will be held this Saturday in the water of Dubai Canal near Dubai Creek opposite Wildlife Sanctuary. The top 30 boats will compete in two categories: the local and open class run for the season 2022-2023 championship.

Surprises await fans of Traditional Rowing Race as the season comes to an end with the 26th Edition of the Al Maktoum Cup taking place on Saturday in conjunction with the Rowing Challenge to be held in the waters of Dubai Canal near the Wildlife Sanctuary along the famous Al Jaddaf Walk.

On the sideline of this race the club will be organizing a virtual rowing competition using the modern equipment in cooperation with Powerfit Gym under the supervision of its founder Ahmad Bin Dhaboi Al Flasi. The tournament is divided into 3 categories Men (Open), Women(Open) and Local Category wherein participants will compete for a total of 30,000 Dirhams prize money.

Dubai Water Canal will witness today the 26th Al Maktoum Cup Traditional Rowing Race - 30ft, the most expensive championship of the traditional rowing race which ends the championship this season 2022.

Dubai International Marine Club completed all preparations for holding the great event today in coordination with the success partners from Government Department and National Institution wherein the area of Al Jaddaf will be transformed into marine heritage festival village with mixed of modern and traditional activities.

The crew of boat no. 36 Al Asifa owned by Hamdan Saeed Jaber and led by the captain Bader Abdul Hakim Mohammed Thani was crowned champion for the second year in a row in the most expensive traditional rowing race in the local category of the 26th edition Al Maktoum Cup for the season 2022-2023 which took place last Saturday in Dubai Water Canal. 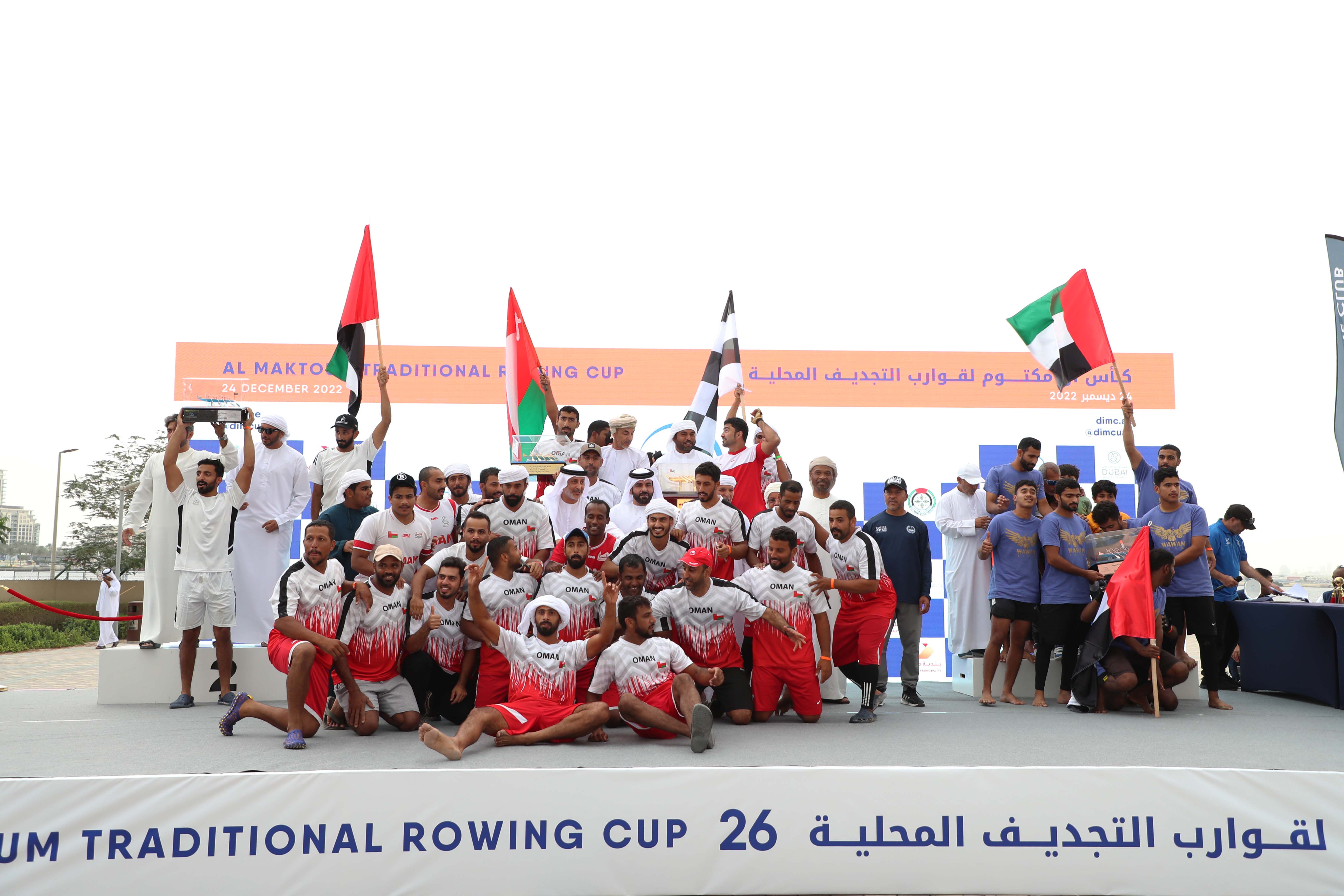 Ahed Oman 44 by Oman Marine Sports Committee led by Hamid bin Salem Al-Bahri won the title in the open category which is for boats participating from GCC countries, Government Departments and National Institutions.

The great event organized by Dubai International Marine Club achieved a huge success by turning the Al Jaddaf Area into a Marine Heritage Festival with various activities reflecting to UAE’s culture such as the workshop by Jailboat Marine, the manufacturer of boats & fishing equipment which attended by the children from Hamdan Bin Mohammed Heritage Center and in addition to that the side event for Modern Rowing Competition, the Rowing Challenge 2022.

The challenge witnessed a huge turnout as the participants' numbers reached around 100 consisting of male and female fitness enthusiasts representing 25 teams who competed for the 30,000 DHS prize money, distributed to the top 3 winners in each category such as the men, women, and local.

The Grove Guys Trio is Salem Al Ali, Sultan Al Shehi and Mohammed Al Tunaji winner of the first place in local category ahead of the two teams from Abu Dhabi Police, the team A trio is Ali Nassib, Ali Misfer, and Ibrahim Mohammad while the team B trio is Mohammed Issa, Salem Jamal and Saif Musabah who took the second and third place respectively.

In the professional Men’s Category, the Grove Guy Trio manage to achieve second place while the best performance recorded in the challenge was from Furious Men’s Team with the trio Killian, Brandon, and Tiwari, and in third place the Biz3 Team with Adam, Greg Herman, and Rowan Bray.

The event supervisor and founder of Powerfit Gym praised the remarkable efforts and cooperation of Dubai International Marine Club in its interest in holding such a competition that requires physical strength inspired by Kayaking.

He said that DIMC open its door for the first time to hold the said competition and with success it achieve we expects some future collaboration.

Ahmed Al Alai, the Director of Referee’s said that the competition attracts a group of virtual rowing and fitness enthusiast by recording times for more than 20 teams.