The organizing committee of the Dubai International Marine Club decided to postpone the first & inaugural round of the UAE Intl Aquabike Championship which supposed to take place on Saturday, 6th of February 2021 for a later date to be determined. 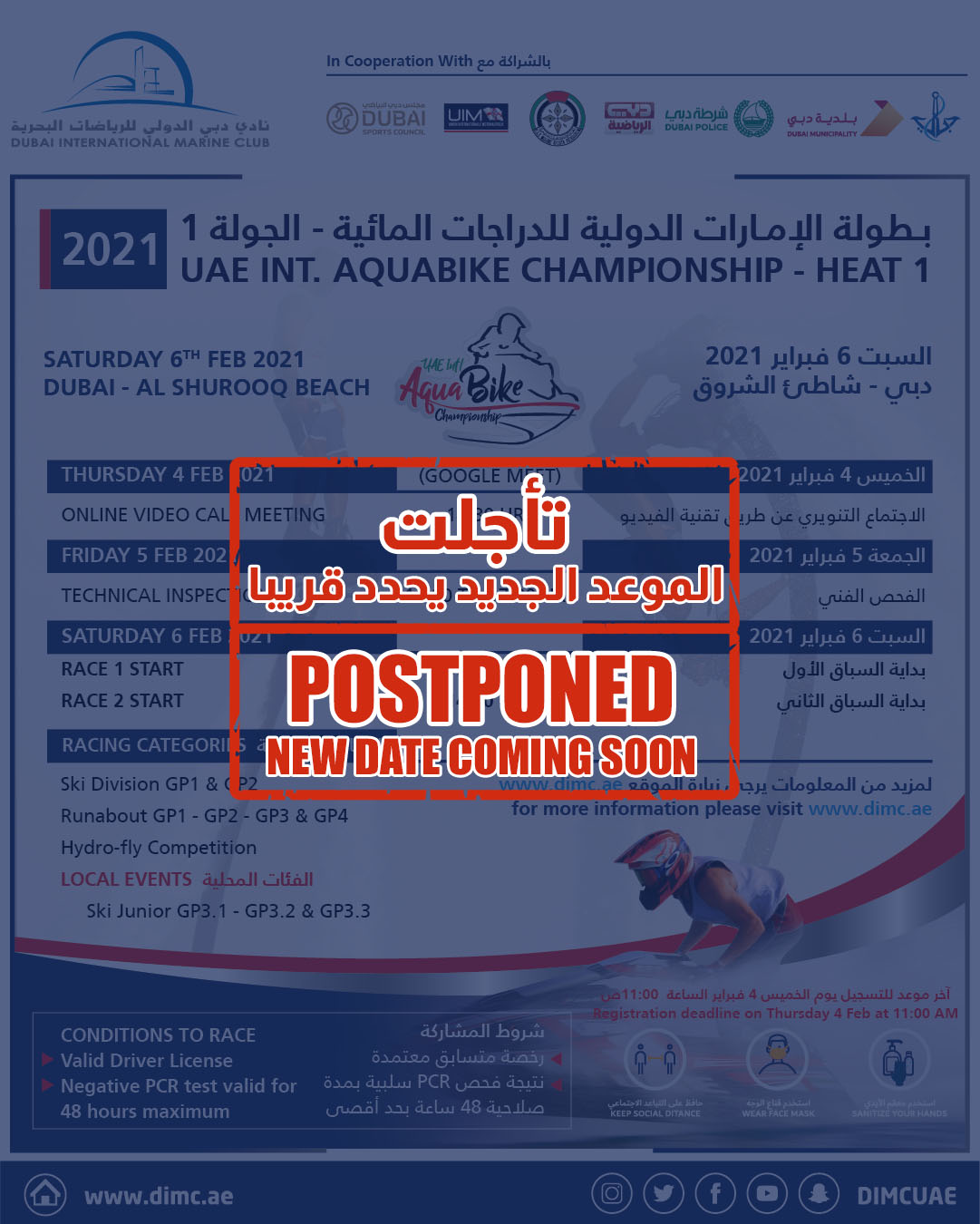 The Dubai International Marine Club will organizes on Saturday the first round of the UAE Aquabike Championship 2021 as the inaugural of the global activities and events under the UIM championship.

The big race comes within the activities of the marine sports season 2020-2021 in Dubai in which the club has a constant interest in this sports since the organization of the first race in 1990, since then the club host the World Championship for the first time in Middle East last 1995 and in 2003 for the second time and the third time last November 2017.

The organizing committee at DIMC announced the opening of registration for those who are interested to participate in the following categories  :  Ski Division GP1 & GP2, Runabout GP1, GP2, GP3 & GP4 , Hydrofly Competition and for the local event for  Ski Junior GP3.1 - GP3.2 & GP 3.3 .

Hazeem Al Gemzi , the Director of Sports Department at DIMC said that the event's organizing committee is ready to take off the Dubai Aquabike Championship which is the first round of the UAE International Championship and the first global event of the UIM.

He specify the great efforts made by the institutional and governmental partners of the club for the success of this event in which this year to be hosted in the one of Dubai's beautiful beach in Al Shurooq which previously hosted the Dubai Watersports Summer Week last June 2020.

He said that the club is working its best to make the big event a successful one wherein on Thursday the Online/Virtual Meeting for the participant will be held which aims to discuss all the  important points of the race instruction , race course and to answer queries from all the participants.

The online registration process continues until Thursday wherein the initial entry list will be announced. On how to register for the event the club send an SMS and electronic link that includes all the instruction.

And on Saturday the race day , the competition include two rounds for each categories the first will start at 10:00 AM while the second will be on the afternoon after that will be the announcement of the final results.

Hazeem Al Gemzi said that the organizing committee of the Dubai Aquabike Race will apply all the precautionary measures issued by the national authorities in the Emirate of Dubai and implement the Dubai Sports Council protocol in the procedures for sports competitions. He remind everyone to practice the social distancing and wear the mask to ensure the safety of everyone. The organizing committee cancelled the awarding ceremony but the first three winner will received their awards  individually.

The organizing committee of the Dubai International Marine Club decided to postponed the first & inaugural round of the UAE Intl Aquabike Championship 2021 that is supposed to take place this Saturday at Al Shurooq Beach.