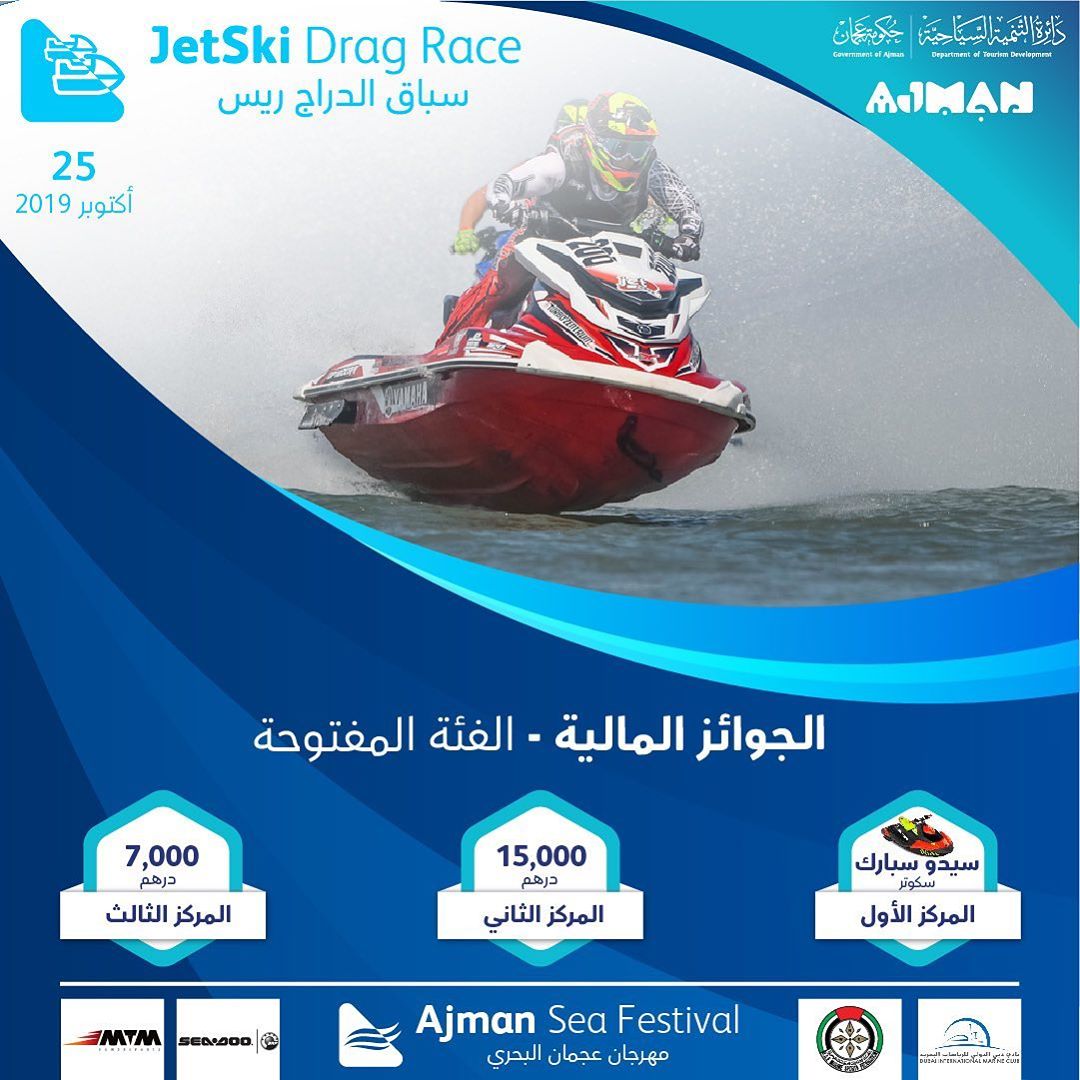 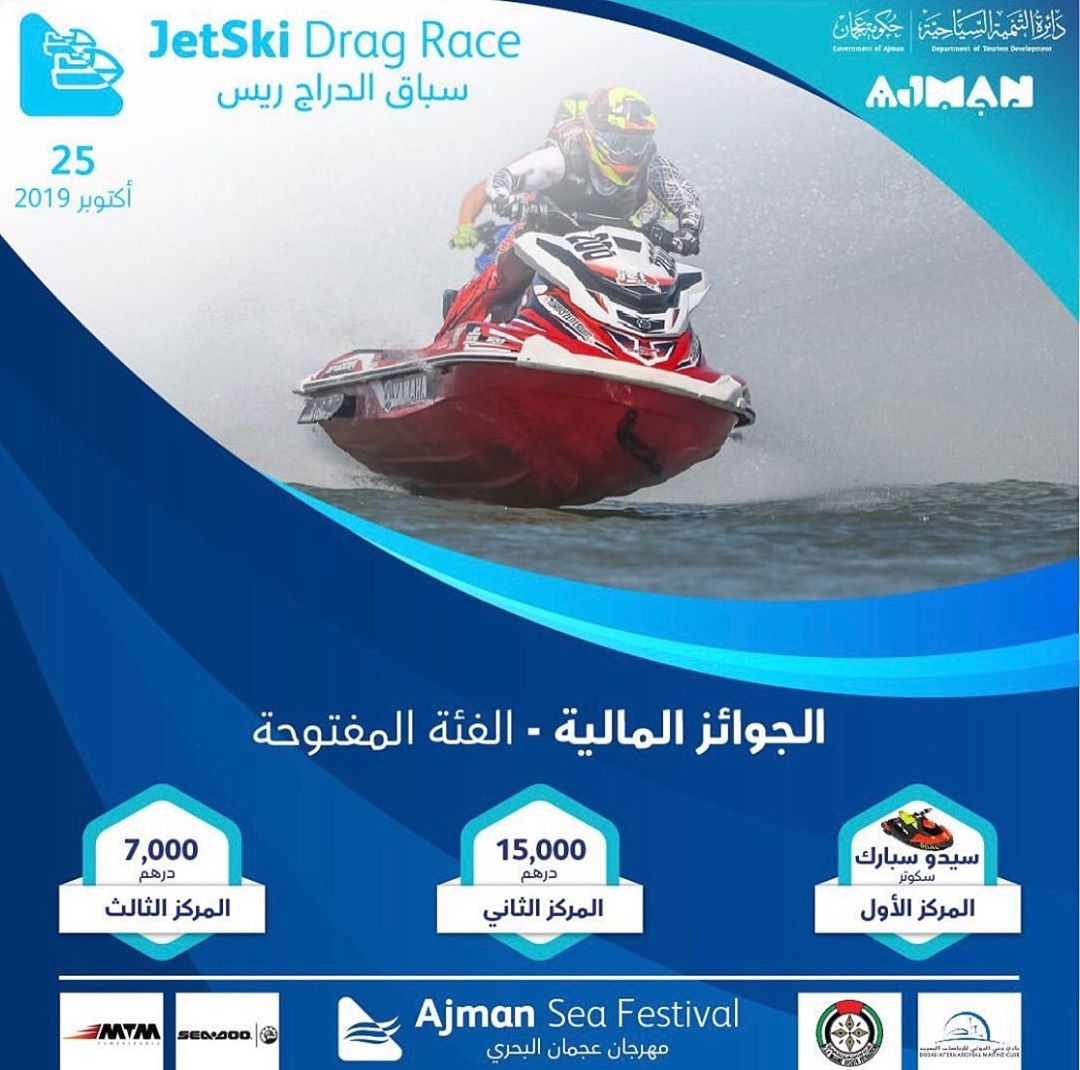 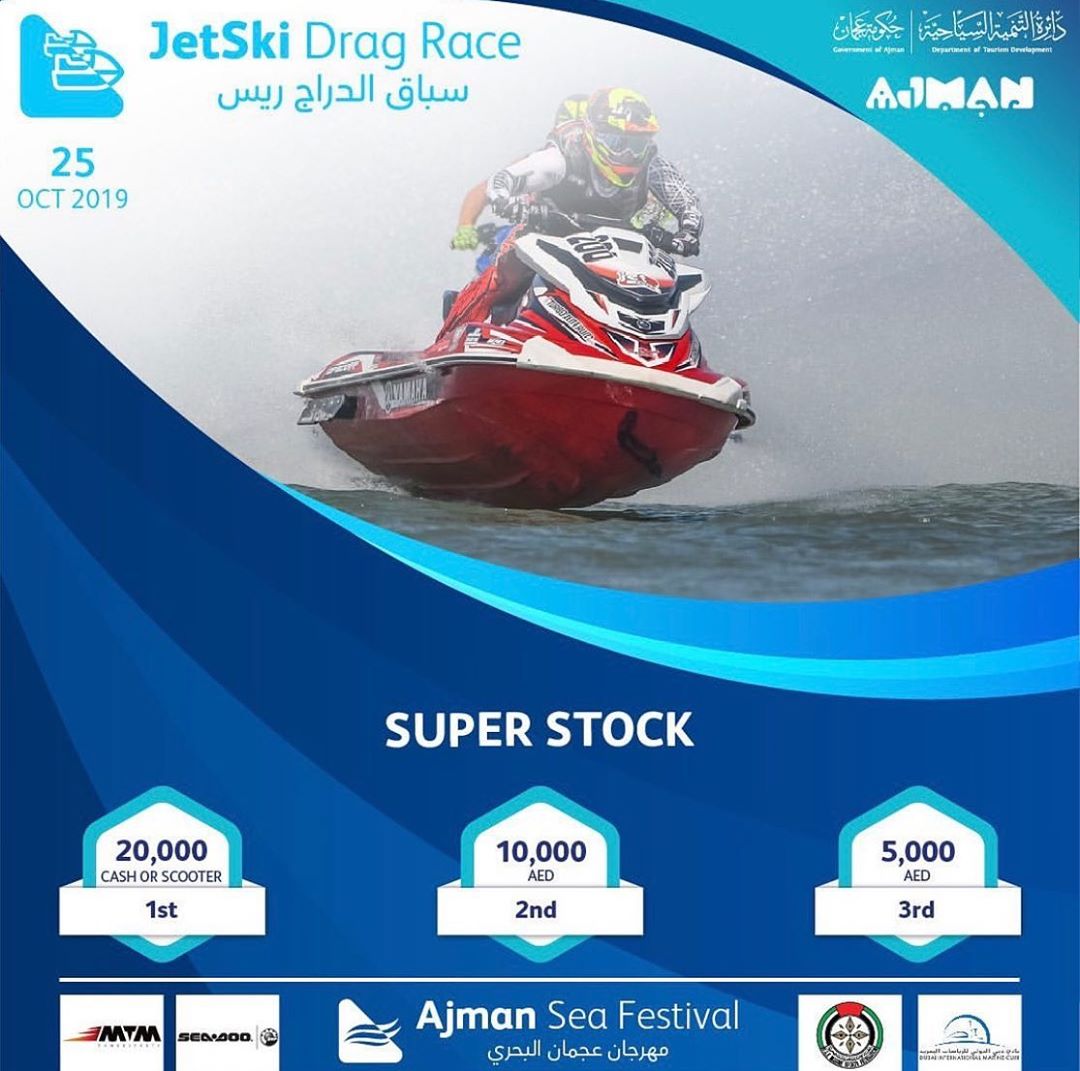 Dubai International Marine Sports Club, in cooperation with Ajman Tourism Development Department, has organized a series of marine sporting events to be held in the shores of Ajman in the coming week, which include three category Jetski Drag Race, Flyboard Championship and Quattro Jetski Marathon.

The Dubai International Marine Club, Racing Department is co-organizing the event this week which will start on Friday (25 October) , the Jetski Drag Race added to the calendar of the marine sports season 2019-2020 which will attracts the most prominent  jetski competitor to be held in the waterfront of the Al Zorah Marina 1

The team from DIMC also will organize the Flyboard Championship on the next day (Saturday, 26 October )which will be held in Ajman Marina , in the Waterfront of Khor Al Madina which brings together the best racers in this popular sport.

DIMC team is also preparing to organize the Quattro Jetski Marathon on the 1st of November in Ajman Corniche for the second year in a row which bring all the elite waterbike/jetski enthusiasts of the adventure of the challenge in a long course.

Mohammed Hareb, the CEO of Dubai International Marine Club, said that the club's participation in organizing the maritime sports events in cooperation with the tourism development in Ajman comes out of the club's keenness as a leading institution in the field of marine sports and to spread those sport in accordance with the directives of HH Sheikh Mansour bin Mohammed bin Rashid Al Maktoum Chairman of the Dubai International Marine Sports Club, who always calls for cooperation with all parties to spread the concept of marine sports through organizing an event.

He pointed out that the Dubai International Marine Club is happy to cooperate with Ajman Tourism Development Department in the coming period in the framework of reviving the community partnership. He thanked Sheikh Abdul Aziz Bin Humaid Al Nuaimi, Chairman of Ajman Tourism Development Department and Saleh Al Jaziri, General Manager and the department and team that organizes the Ajman Sea Festival

The Jetski Drag Race will be held at 14:30 until 15:30  in the afternoon as part of the Ajman Sea Festival organized by the Ajman Tourism Development Department in cooperation with Dubai International Marine Club(DIMC) at Al Zorah Marina 1

Hezaim Al Gemzi the Director of Sports Department at Dubai International Marine Club said that the schedule for the race will start as early as 8:00 AM for the Technical Inspection of the participants and with the race briefing at 11:00 AM .

As per the Jetski Drag Race include two categories the Super Stock and the Open Category wherein the participants will enter the competition thru various stages of knockout round of the track up to 200 meter.

Al Gemzi added that the organizing committee has adopted the rules governing the race, which include the conditions for this race as well as the appendix on competition, the method of starting and the start procedures which depend on a precise system up to 50 meters before entering the approved track.

He also pointed out that each participants  to abide by the instructions of the race supervisor at the moment of the start and stand in a straight line and waiting for the green flag to be raised to mark the beginning of the race. He stresses that the racer must attend the race briefing to understand the regulations and to answer their queries. 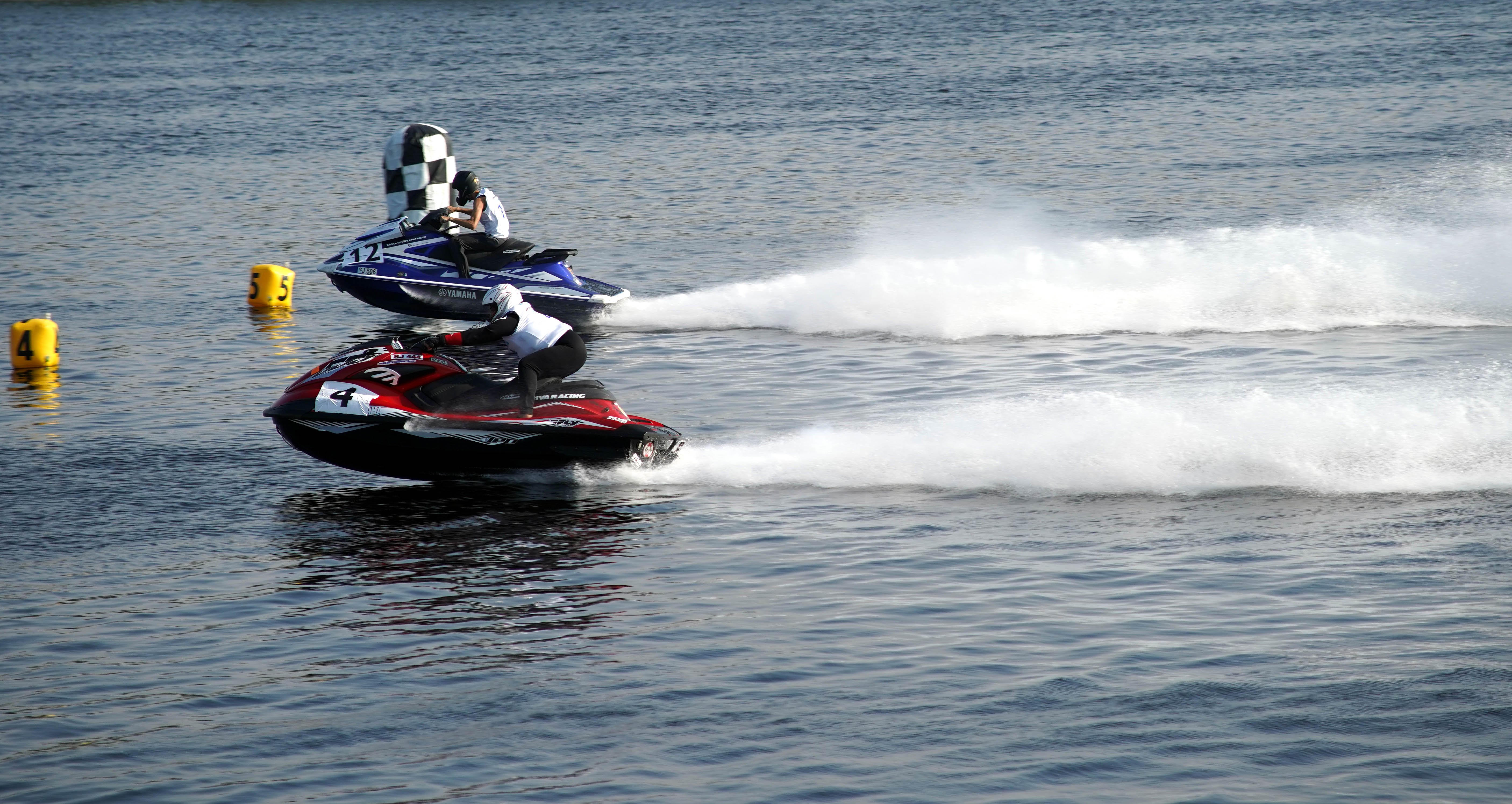 Sheikh Abdul Aziz bin Humaid Al Nuaimi valued the club’s contribution and effort in organizing the and making the first Ajman Jetski Drag Race held in Al Zorah , Marine 1 last Friday and the Ajman Flyboard Championship in Marsa Ajman last Saturday with the participation of around 30 contestant that are champion of this sport in the country and from the Kingdom of Bahrain and Jordan.

The Chairman of Ajman Tourism Development Department (ATDD) thanked the family of Dubai International Marine Club (DIMC) during a meeting with Mohammed Hareb, CEO of the club in with the presence of Saleh Mohamed Al Geziry, Director General of ATDD during the event last Friday , the Jetski Drag Race.

DIMC supervised the organization under the supervision of Hezaim Al Gemzi , the Director of Sports Department at DIMC  for all the Jetski races as part of the Ajman Sea Festival which include various activities and events including the Jetski Drag Race which is held for the first time in the country and the Flyboard Championship along side with the Dragon Boat Races

He said that the event was a success for having more than 30 competitors from the UAE Champions and Gulf Stars.

He said that the attendance of Sheikh Abdulaziz bin Humaid Al Nuaimi, Chairman of Ajman Tourism Development Department during the Jetski Drag Race increase the excitement of the competition in which he congratulated the champion , Salman Younus Al Awadhi for both category the Super Stock and Open Class on the next day, Manea Al Marzoqui won the Flyboard professional and Salem Moshin for the Flyboard beginner.

Through the supervision of the club Director of Sports Department with the distinguished team who led the event to success and received acknowledgement from the officials of ATDD.

In cooperation with the ATDD the DIMC is organizing the Quattro Jetski Marathon on Friday as part of the Ajman Sea Festival which will be the second round of the UAE Championship that brings together the champion and stars of the state.

It is worth mentioning that in the Jetski Drag Race that took place last Friday we witnessed a remarkable performance by our world champion Salman Younus Al Awadhi who took the title for the Open and Super Stock category with a prize of Seadoo Spark Scooter and 20,000 Dirhams

Ali Mohammad Yousuf Al Langawi , the gold medalist of the last year Asian Games in Indonesia finished on the third position for the Open Category and second for the Super Stock.

In the second round of the UAE Championship we saw the talented Manea Habeeb Jasim Al Marzouqi who continued to shine in the Flyboard Championship taking the first place for the Professional Category while on the Beginners category Salim Moshin won .