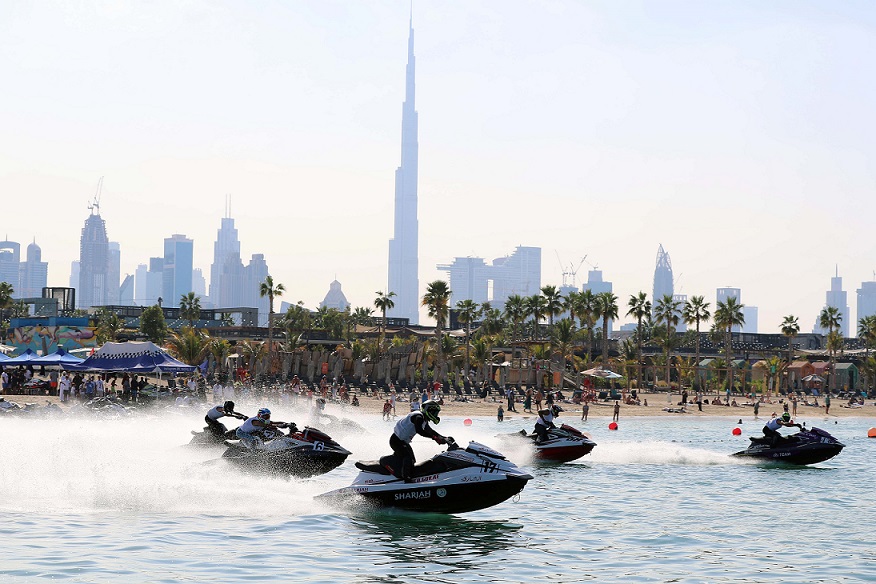 Aquabike Night Show is back at the Boat Show

Remarkably the club hosted the "Night Show" during the Aquabike World Championship 2017 prior to organizing it locally during the 26th Dubai International Boat show that comes as part of the categories for UAE Int'l Aquabike Championship.

Mohammed Harib, CEO of DIMC said that "Dubai International Boat Show remains the focus of attention for marine sports enthusiast in Middle East inline with that is a great opportunity to showcase the DIMC event such as Dubai Fishing Competition & the Night Show for Hydrofly and Freestyle competition.

He confirmed that the said competition will be tomorrow and it will be a part of the UAE Int'l Aquabike Championship 2022 which will be held in front of the exhibitors stands in coordination with Dubai Harbor.

Dubai International Marine Club will organize on Saturday the third round of the UAE International Aquabike Race as part of the current season 2021-2022.

Last January , the club organized the opening round of the Championship that took place at Al Shorooq Beach in conjunction with UIM centenarian year (1922-2022) wherein the event gathers 80 participants from 15 countries who competed for 12 different categories.

Sunrise Beach (Al Shorooq) in Jumeirah will host the third round of UAE Int'l Aquaike Championship on Saturday organized by Dubai International Marine Club under the current marine sports season 2021-2022.

The club has successfully organized the opening round of the Championship last January wherein the second round has been held in Abu Dhabi and now returning to Dubai for the third round. It is expected that this event will bring together the champions from the different countries in conjunction with the celebration of the UIM centenary (1922-2022).

The competition will be held on Saturday divided into two periods,  the MOTO 1 in the morning and the MOTO 2 in the afternoon. Prior to that as per the Race Timetable the Online Registration will be until today prior to the Online Racer Briefing at 14:30 HRS. Tomorrow will be the Confirmation of Registration  (Getting the Jacket & Ski No.) and Technical Inspection to held at the DIMC headquarter.

The club begins the third round last Friday with the exceptional Night show for the Freestyle & Hydrofly Competition held in conjunction with the 28th edition of the Dubai International Boat Show 2022.